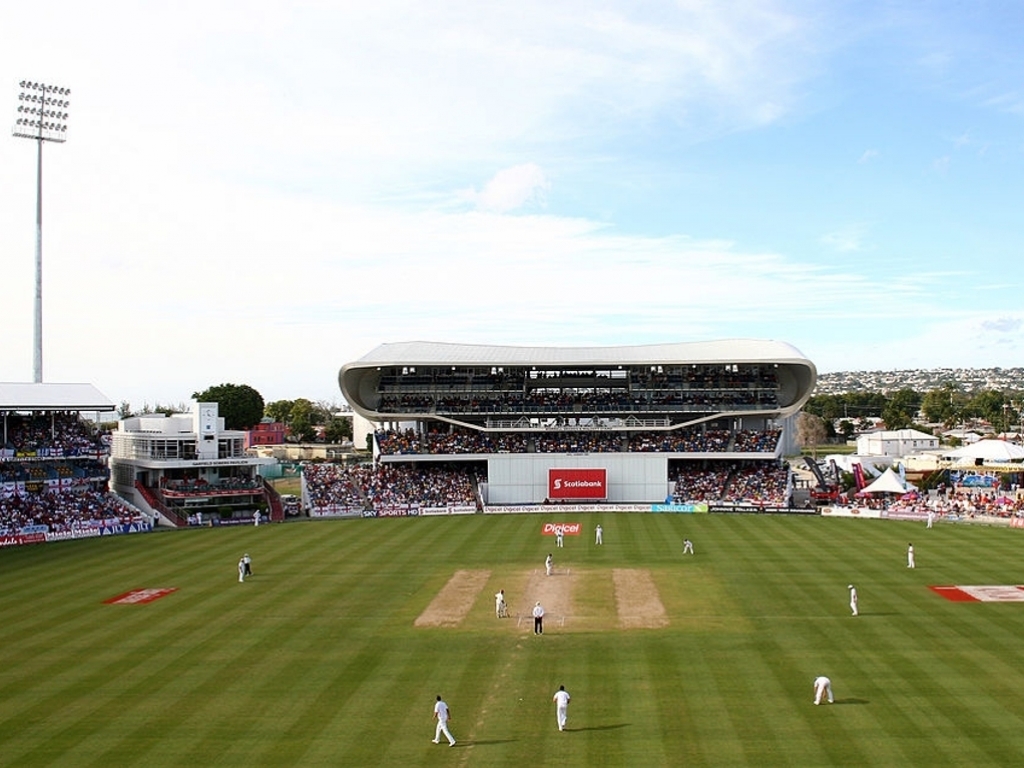 Cricket at the Oval began in 1882 when the Pickwick Cricket Club assumed formal ownership of the ground.

The first international match held was in 1895 when Slade Lucas’ side visited the island. The first Test match was held in January 1930, when the West Indies and England played to a draw.

Since the genesis there have been a total of 51 Test matches played on the Kensington Oval grounds, 23 of those matches won by the West Indies.

The stands of the Kensington Oval were extensively rebuilt for the 2007 Cricket World Cup in a BDS$90M (US$45 Million) redevelopment.

Demolition of the old stadium began on schedule in June, 2005 after completion of the first Test against Pakistan.

The names of the former stands which made up the Kensington stadium were the George Challenor stand, the Hall and Griffith, the Kensington, the Mitchie Hewitt, the Pickwick, and the Three Ws stand plus the Peter Short Media Centre. Most of these names have been retained.

In 2004, a construction team was chosen to redevelop the Kensington Oval outfield. The topsoil on the grounds previous outfield was a sandy clay loam, which struggled to cope with Bridgetown’s occasional heavy rainfall, with climate data indicating that a storm lasting up to an hour could dump about 50mm of rain once every five years.

The topsoil was a complete mixture of soils and significantly varied in depth, lying over ancient coral reef limestone.

Although many types of grass options was suggested to be used for the outfield, it was decided to use Tifway 419 hybrid Bermuda grass as this type of grass is highly disease resistant, dense and spreads quickly to ensure quick recovery from injury and allows close mowing.

The pitch was reconstructed with four main pitches and a profile consisting of; 200mm of clay, over 150mm of medium-fine sand along with a gravel drainage layer.

The square’s soil is made up of 71% clay, 14% silt and 14% sand and during the redevelopment it was isolated from the rest of the ground so that it could be constructed before the outfield was completed. The pitch square’s was sown down with Princess Bermuda grass, with the base and soil added in layers, before completion in May 2006.

The West Indies recovered from a first innings deficit by nipping England out quickly and chasing the target down with five wickets in hand.

England had posted 257 all out in their first innings largely thanks to a knock of 105 from skipper Alastair Cook.

The West Indies crumbled to 189 all out in their first innings with Jerome Blackwood’s 85 saving the day for the hosts with James Anderson’s 6 for 42 tearing them apart.

Jerome Taylor and Jason Holder ran through England in the second innings allowing the West Indies back into the game with Darren Bravo’s 82 the top score in the chase.

Dinesh Ramdin felt the pitch got better to bat on as the game progressed: “When our new ball bowlers took wickets, we knew we were right back in the game.

With the West Indies sporting an inexperienced team few players have had too many chances to impress at a venue dominated by Brian Lara with Shai Hope and Kraigg Brathwaite misfiring last time out.

Jason Holder picked up five wickets for 49 runs across two innings against England here in 2015.

Only Younis Khan has played here in a Test match before and he was less than impressive on that occassion scoring 31 and a duck.

Hot with little chance of rain barring on day four this Test should get plenty of play in.

The pitch in Barbados is generally sporting and teams favour batting first although this also has a history of backfiring.

In recent times the surface has become easier to bat on as the game wears on but not exactly a flat track.