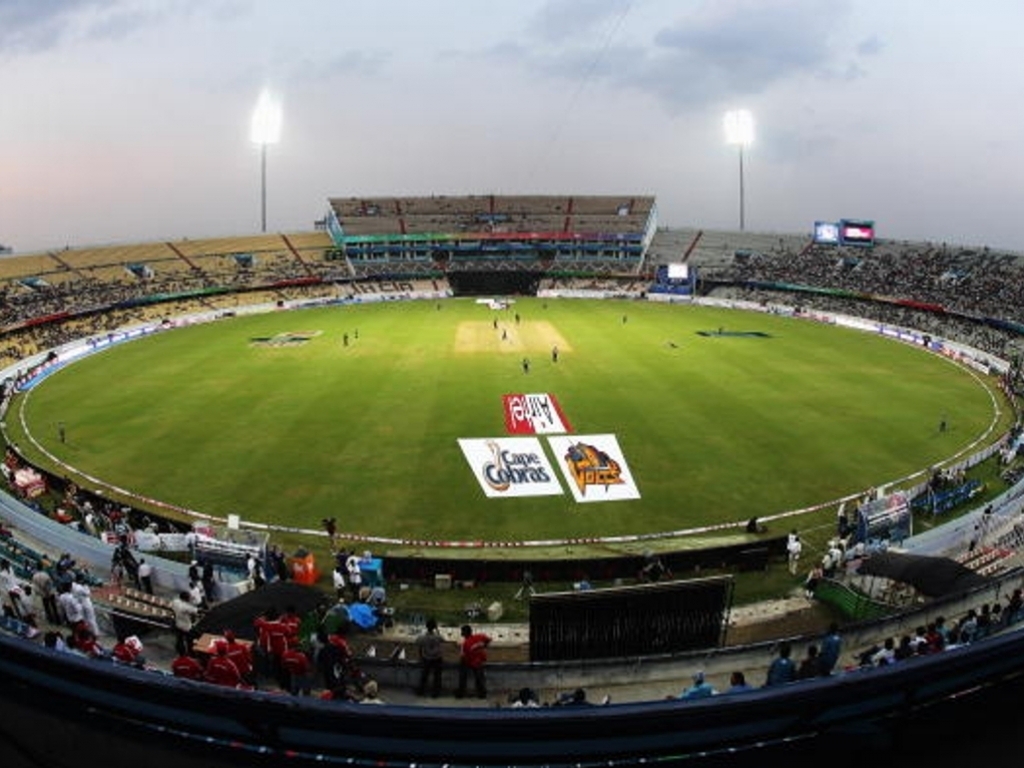 The Rajiv Gandhi International Cricket Stadium is the principal cricket stadium in Hyderabad, Telangana, India and is the home ground of the Hyderabad Cricket Association.

It is located in Uppal, an eastern suburb of the city. It has a capacity of 55,000 spectators presently and extends across 16 acres (65,000 m2) of land. The ends are named Pavilion End and North End. On the retirement of VVS Laxman, the HCA decided to honour the state hero by naming the North End after him.

HCA’s previous home ground was the Lal Bahadur Shastri Stadium in the Fateh Maidan sports complex at Basheerbagh in central Hyderabad. The ground belonged to the Sports Authority of Telangana State and HCA had limited operating autonomy over this ground.

Moreover, due to its smaller size, it soon came to be known as a high-scoring ground and so Hyderabad was not considered for many high-profile cricket matches in India.
In 2003, the proposal for a new stadium was submitted by HCA to the government of erstwhile

Andhra Pradesh, then headed by N. Chandrababu Naidu. The proposal was quickly cleared and HCA was allocated a budget for the same. The government also identified a large piece of land suitable for the project at Uppal.

Most of the funding for the project came after an open auction of the stadium’s title was held. Visaka Industries Limited won the auction with a bid price of Rs. 65,00,00,000. A sum of Rs. 43,00,00,000 was paid in advance and the stadium was named as Visakha International Cricket Stadium in 2004.

Following this decision, HCA was required to pay Visakha Industries six times the contract price in accordance with the contract clauses governing any subsequent renaming of the stadium or the Visakha name not remaining attached to the stadium. HCA however, following some negotiations by Government, got away by paying an amount of Rs. 43,00,00,000, i.e. the contract price only.

The ground has hosted three Tests to date resulting in two India victories and one draw.

India blasted past Australia in 2013 with Cheteshwar Pujara smashing a double ton to see the home side establish a big first innings lead before Ravi Ashwin spun his way through the Aussie lineup claiming a five for in the Aussie’s second at bat as they won by an innings and 135 runs.

In the build up to the Test Bangladesh skipper Mushfiqur Rahim said: “Shakib will be handy in these conditions and we also have Taijul Islam and Mehedi Hasan. They have to be at their best because we are playing against the No. 1 team in the world.”

India spinner Ravichandran Ashwin told BCCI.TV ahead of the match: “This is a big ground for a spinner, you can toss up a bit more even in shorter version of the game. There is a little more hold on the wicket, the bounce gives you allowance to be imaginative. I enjoy bowling here.”

Cheteshwar Pujara has scored two hundreds at the venue in two Tests including a double hundred and he leads the all-time leading Test scorers at the ground.

Ashwin has taken 18 wickets at this ground in just two Test matches and has bagged three five-fors here.

No rain expected for the duration of the Test match

Should be a typical Indian wicket, dry and breaking up from the third day, the team that wins the toss will no doubt bat first and look to get their spinners in business later in the game.

The conditions will hold little fear for Bangladesh but the opposition almost certainly will with India proving to be a challenging opponent for all who visit.