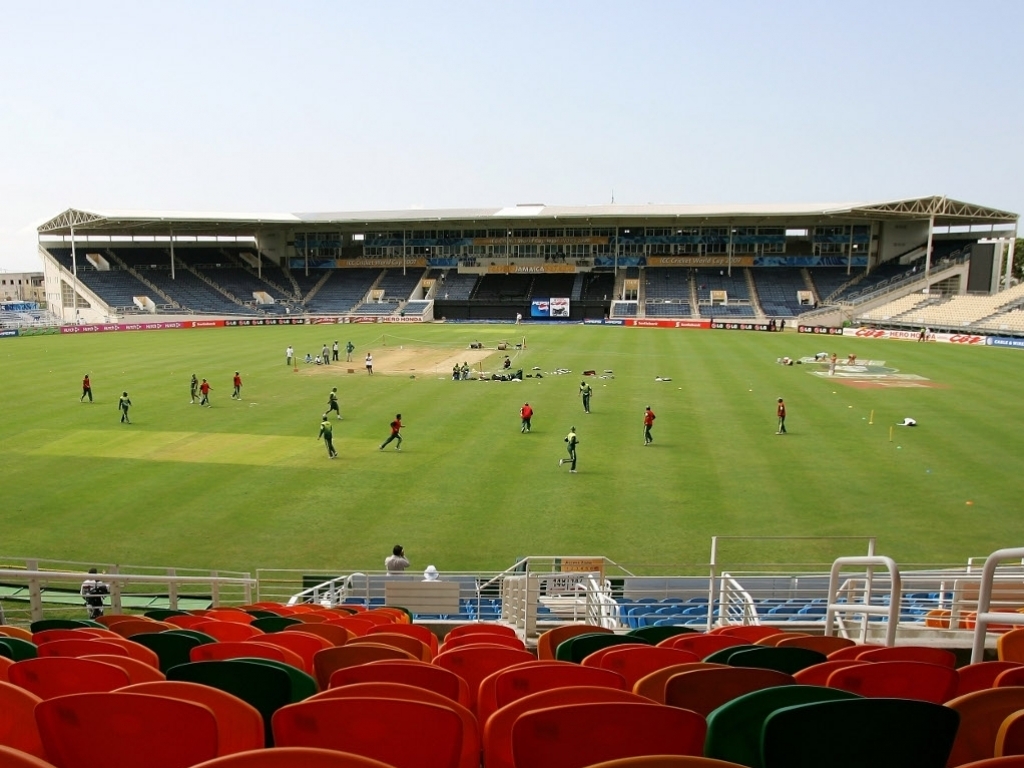 Situated in a somewhat suburban part of Jamaica’s capital Kingston, Sabina Park has a rich history and a mean reputation to match the island’s tough capital.

Its location in the city’s driest microclimate resulted in the hardest and fastest surface in the Caribbean for many years, making it a fearsome place for visiting sides facing up to unrelenting Windies quicks. But the pitch has slowed in recent times, and attempts to reverse the trend through re-laying the wicket have for the most part proved fruitless.

This change is mirrored in the stands, which underwent a significant upgrade for the 2007 World Cup. The capacity of the ground was increased from 15,000 to 20,000 as new concrete stands were erected, but this came at a cost. Views of the picturesque Blue Mountains to the north of the ground were lost to patrons in the George Headley Stand, while the popular ‘Mound’ Stand in the East was replaced by the ‘Party Stand’.

Fortunately the members pavilion, a charming old wooden building which lies square of the wicket on the West side, remained untouched. Legend has it that no member is allowed to utter a woman’s name in the pavilion or else he must buy drinks for everyone there, a tradition which stems from an unfortunate incident where a man mentioned a lady’s name in reference to having had a liaison with her. The lady’s husband happened to be sitting right behind him.

The ground hosted its first Test in 1930 during the West Indies’ first home series, and has since seen contrasting fortunes from the first Test triple hundred (by Andy Sandham 325 in 1930) and Sir Garfield Sobers’ then-record 365 not out against Pakistan, to the embarrassment suffered when the 1998 Test between England and West Indies was abandoned on the first day with the pitch deemed too dangerous to the batsmen. And then there’s England’s disastrous 51 all out in 2009, of course.

This Test will be the 50th played at the Kingston venue.

Rain and Roston Chase cost India the chance to take a 2-0 series lead over the West Indies in the last outing at the famous Jamaican ground.

Chase hit an unbeaten 137 and batted for nearly six hours to deny the India bowlers, he was assisted by Jermaine Blackwood, Shane Dowrich and Jason Holder who all hit fifties after the top four flopped yet again.

India had established a huge first innings lead after Ravi Ashwin spun his way through the Windies batsmen in the first innings with the hosts collapsing to 196 all out after winning the toss and batting.

Lokesh Rahul and Ajinkya Rahane then scored centuries as India reached 500 for 9 before declaring.

A day was lost to rain before Chase’s heroics helped the West Indies save the match.

Wicketkeeper Dinesh Ramdin on needing a seaming all-rounder: “The Caribbean gets very hot. When you look at top teams they have an extra bowler in the top five in their batting lineup. That’s where we lack a fast bowler like a Watson or Ben Stokes or someone like that. Maybe if we can develop a player, our own player, like that, it’ll come in handy for us.”

India batsman Cheteshwar Pujara said upon seeing the track last year said: “If we see the first Test, there was good pace and bounce from the wicket, and we did well. We just need to continue doing what we have been doing well and there have been many partnerships from the last game.”

Marlon Samuels is the West Indies leading Test runscorer out of players currently playing but he has not been selected for the first Test squad.

Chase will obviously have fond memories of a ground he claimed a five-for at while also whacking that match-saving ton.

Pakistan last played here in 2005 with Younis Khan scoring a hundred on that occasion.

Hopefully the drainage at Sabina Park is up to scratch with thunderstorms expected on each of the five days of play.

Despite a dicey weather forecast the Sabina Park pitch is generally a result wicket that offers a window into the Caribbean of old assisting the fast bowlers.

Pakistan have plenty of pace firepower though and it will be interesting to see how much the pitch favours seamers.