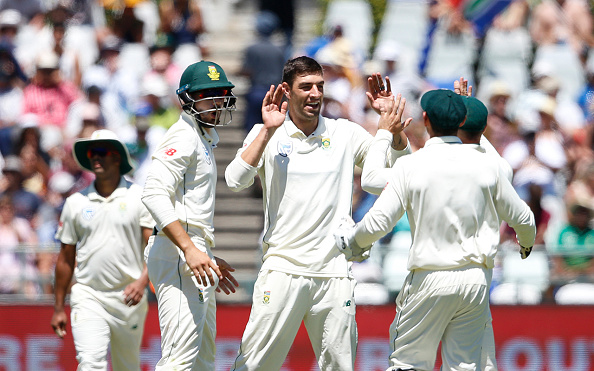 The Proteas’ pace battery got the better of Pakistan on the first day of the second Test at Newlands after the hosts dismissed the tourists for just 177.

The home side then rammed home their advantage as they went to stumps on 123/2 with opener Aiden Markram scoring 78 but was bowled by part-timer Shan Masood with the last ball of the day.

Hashim Amla is still at the crease on 24 with the hosts looking to drive home their ascendancy on the second day.

It all worked to plan as captain Faf du Plessis won the toss and opted to bowl first on a Newlands surface that offered plenty of bounce.

Pakistan slumped to 75/5 as the batsmen just found the pace barrage to much to handle as most of the tourists were caught behind fending the short ball.

Visiting captain Sarfraz Ahmed tried to stem the flow with a gritty 56 while Shan Masood (44) again showed that he has the technical capabilities to bat on faster pitches.

Proteas fast bowler Duanne Olivier carried on from where he left off in Centurion with another four-wicket haul,, finishing with figures of 4-48 im 15 overs.

Steyn took 3-48 and Rabada 2-35 while Philander finished with one wicket on his return.