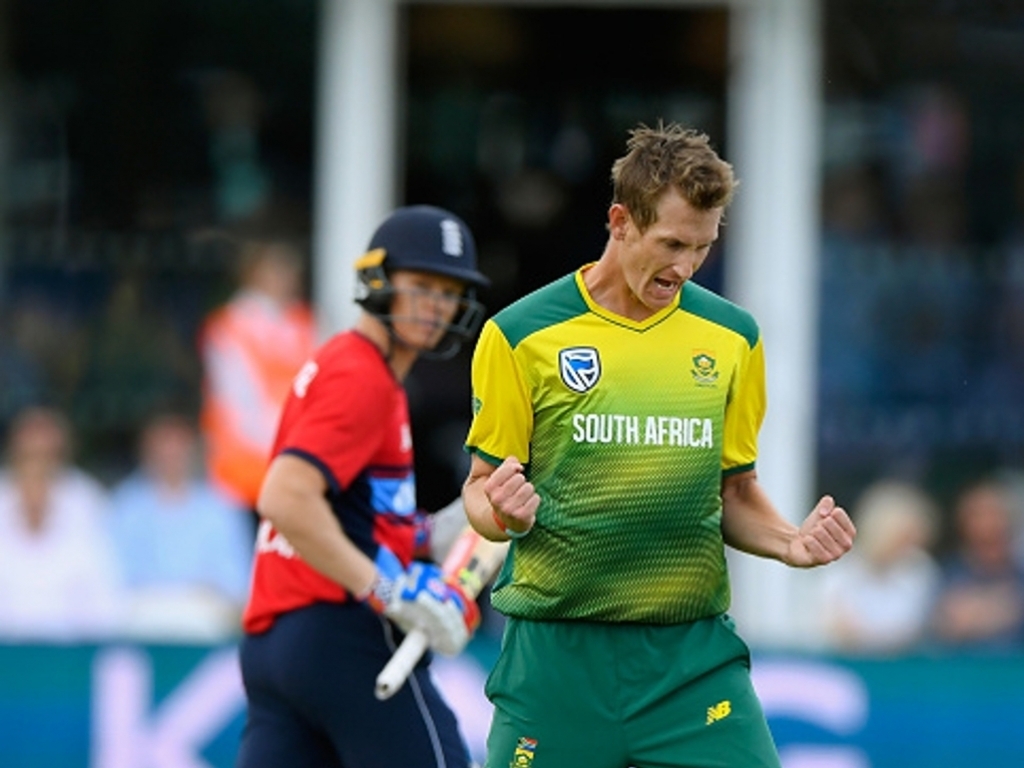 South Africa came back from a poor position to pull off a stunning last-ball win in Taunton as they levelled the Twenty20 series and set up an exciting decider in Cardiff on Sunday.

England had been 125 for one after 13 overs in pursuit of 175 when Chris Morris (2-18) took the wicket of Johnny Bairstow (47), conceded only two runs of his final over and helped claw his side back into the game.

He was named man of the match for his efforts after his fellow bowlers restricted England to 171 for six, which gave South Africa a three-run win.

Both sides chose to rotate their squads as South Africa looked to bolster their bowling and England blooded two more debutants and made a couple of other changes.

For England all-rounder, Liam Livingstone, and the South African-born seamer with a strong Zimbabwe cricket heritage, Tom Curran, were awarded caps. Sam Billings got the nod in Alex Hales’ place and Liam Plunkett played for a rested Mark Wood.

Eoin Morgan won the toss and elected to bowl first and who would blame after his side chased so well at the Rose Bowl, especially given that the Taunton wicket is famous for high-scoring chases.

JJ Smuts put up a much better showing and a busy start took the visitors to 57 for one in the eighth before Mangaliso Mosehle (15) joined opener Reeza Hendricks (7) back in the pavilion.

De Villiers (46) and Smuts (45) took South Africa to 90 for two at the half-way mark – a solid base from which to launch to a good score on this tiny postage stamp on a ground.

But the Proteas would never really go up a gear as England bowled well and wickets fell regularly.

De Villiers made a quick 46 runs from only 20 balls, despite not timing the ball particularly well, and after he holed out off David Willey (1-29), the innings lost momentum.

Curran (3-33) starred on debut as he claimed the wickets of dangerous batsmen Ferhaan Behardien (32) and Chris Morris (12) and South Africa could only muster 174 for eight on a wicket where they say you need 200 for par.

Jason Roy (67) and Johnny Bairstow (47) looked to have the match and the series sewn up as they put on 110 runs for the second wicket but Bairstow fell to Morris and then Roy was ruled out by the third umpire for obstructing the field.

It was a controversial decision, to say the least, as he made a wide turn half way down the pitch but then ran a straight course to make his ground when he was hit by a throw from the fielder Andile Phehlukwayo. He may have turned to the side from which the fielder would throw the ball towards the stumps but it seems very harsh to decree that he changed his course to get in the way of the throw.

Livingstone was then given a life as he was caught off an edge and a shoulder before Buttler (10) and Morgan (6) failed to get going.

England suddenly needed 12 off the last over and Phehlukwayo started well as he conceded singles off the first three balls. Livingstone (16) was then run out going for a second and England needed eight off the last two balls.

Dawson (7 not out) then cracked a one bounce four over extra but he was unable to get any bat on the final delivery and South Africa breathed a lot more easily as they claimed a narrow three-run win off the final ball.

It was just a Twenty20 game at a little ground that hasn’t seen international cricket for nearly 25 years but it may just prove the turning point in what has been a far-from-ideal tour so far. Their coach, Russell Domingo, flew home yesterday for a family emergency (his mother had a terrible car crash) and the most important part is this tour is yet to come.