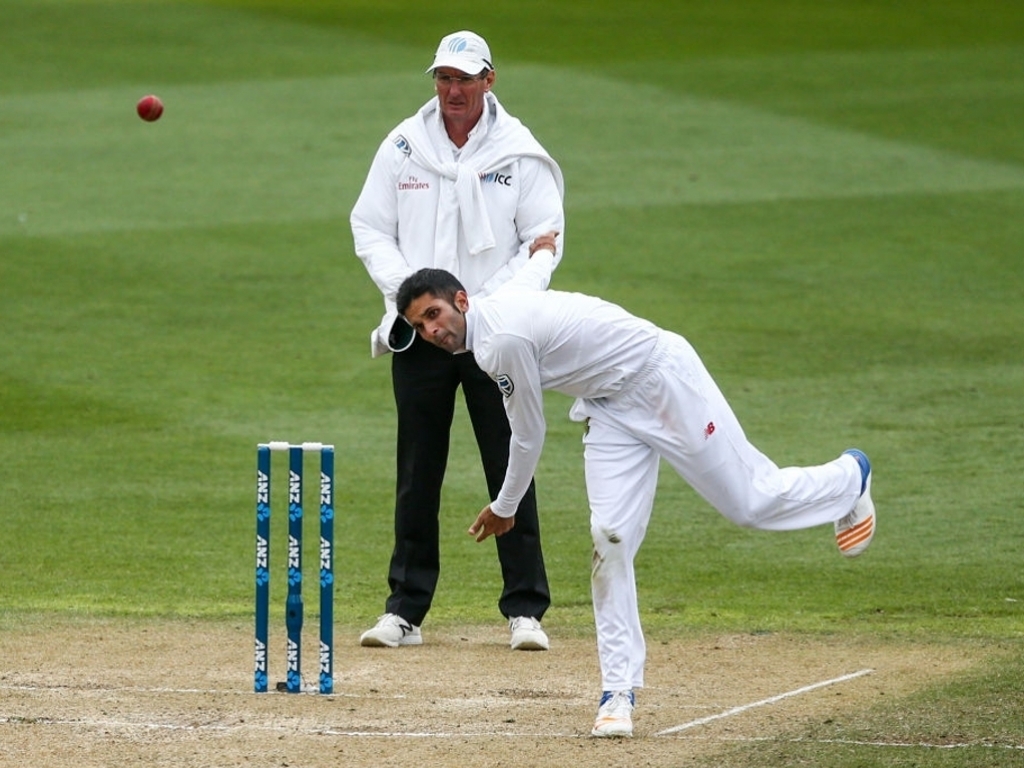 Keshav Maharaj (6-40) destroyed New Zealand for only 170 in their second innings and set up a comfortable victory for South Africa over New Zealand in the second Test of this series, at the Basin reserve.

South Africa could only add 10 runs to their overnight score of 359/9 before Morkel (40) eventually was bowled by the spinner, Jeetan Patel (1-57), to put New Zealand out of the misery of a 57-run last-wicket stand. Vernon Philander was not out on 37.

The morning session produced wickets with the new ball on the first two days and today was no different as New Zealand’s second innings crumbled to 90 for five soon after lunch. Having conceded a first-innings lead of 91, they were staring down the barrel on a cold and grey day in the capital city.

Morne Morkel claimed the first three scalps as he nipped each of Tom Latham (6), Kane Williamson (1) and Neil Broom (2) out quickly. Morkel extracted some extra bounce out of the surface with the harder ball but it was Maharaj who destroyed the middle order as he took each of the next six wickets, for just 40 runs.

Maharaj’s efforts represented the best figures by a South African spinner since 2003 and the second-best ever figures by a slow bowler in Test history at the Basin Reserve. He bowled with great control and tact, working to plans with slight variations and considerably more turn than any other on this good batting track during the three days that the Test lasted.

No spinner had taken five-wicket hauls in consecutive matches in New Zealand since 1973. With match figures of eight for 87 he was duly named man of the match.

South Africa were thus set a target of only 81 for victory. They made fairly light work of the chase and despite losing their openers Stephen Cook (11) and Dean Elgar (17), they were able to knock up the required runs five minutes before the extra half hour was up.

Cook’s lack of form is a worry to the team and that Dean Elgar fell once again to a short ball by his old mate Neil Wagner, will likely be a worry to himself.

That this Test was over in three days on a good batting strip was more indicative of a poor showing with the bat by New Zealand than anything else. The home side lost wickets to the spin of JP Duminy in the first innings and Maharaj in the second innings and while Maharaj bowled beautifully today, they should have put up more of a fight.

It did not help that they were without their second-best batsman, Ross Taylor, and indeed their best bowler, Trent Boult, but New Zealand will be very disappointed by this result. The big turning point in the match was the 160-run partnership for the sixth by Quinton de Kock and Temba Bavuma on day two and New Zealand simply never recovered from it. They did not put up much a fight in any of the remaining four sessions

South Africa lead the three-match series 1-0 with one game to play in Hamilton a whole week from now. The side will feel relaxed and have plenty of time for golf and girlfriends, who are on holiday in the country now.

The Proteas now cannot lose the series which means New Zealand will have to wait for a first ever series win over the men from South Africa.