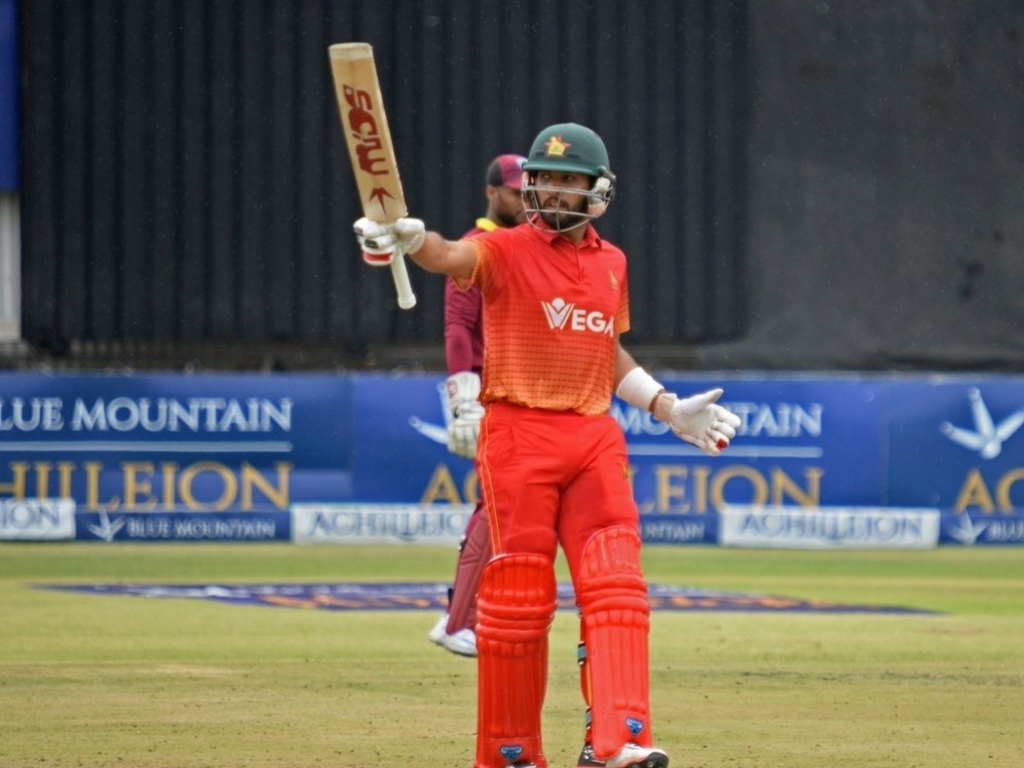 Zimbabwe allrounder Sikandar Raza gave credit to the man he shared an unbroken 91 run ninth wicket stand with after their victory over the West Indies.

Raza was full of praise for Tendai Chisoro after rain brought the curtain down on the tri-series round robin phase handing Zimbabwe a five run DLS method win.

Having rescued Zimbabwe with the bat the pair were tasked with opening the bowling as skipper Graeme Cremer looked to make the most of a turning wicket.

Raza explained: “As soon as we came off, the first thing I asked is ‘How long is the lunch break?

“And because it’s still gripping, and it wasn’t drizzling at that moment, we’ll see if it turns. And credit to TC, he started so well. Those two wickets in the early overs certainly put us on the front foot.”

Chisoro was undaunted by the prospect having opened the bowling in T20 games before: “Graeme [Cremer] just said: ‘Do what you know best’.

“When we started it wasn’t that wet, so we could grip the ball and it was turning really nicely.

“And some of them weren’t turning, they were just going on with the angle, so it was pretty difficult to bat at that moment. And then they lost two quick wickets, so the momentum was on our side.”

Raza spoke about how Zimbabwe adjusted on the fly and set themselves new targets: “We had to revise our total that we thought would be a winning total, once we saw that it was gripping and turning.

“We sent a message back [while we were in the middle] that we’re looking at 180 to be a winning total.

“Once we passed that total, we got together again and we thought this is not the time to go ultra aggressive just because we’ve achieved that total. We’ll take our chances, but we’ll take them in the 48th and 49th overs.

“When TC came long, I know he’s an aggressive batter so I kind of have to slap him at times and tell him ‘This is what we’re going to do and this is how we’re going to play’,” Raza joked, “but credit to him.

“We all know TC can bat. He’s done it at franchise level, and he’s done it for Zim A as well. For an aggressive batter with not a lot of international experience, I think credit goes to TC for how he batted out there. He deserves all the credit.”

The win means Zimbabwe qualify for the tri-series final which will be played against Sri Lanka in Bulawayo on Sunday.

Raza believes this result will be a huge boost to the team: “Coming out of a performance like today, I’d say it’s pretty high.

Echoing that sentiment Chisoro said: “I think our confidence is very high.

“We’re very used to these conditions now, and we should use that to our advantage, and win the final.”