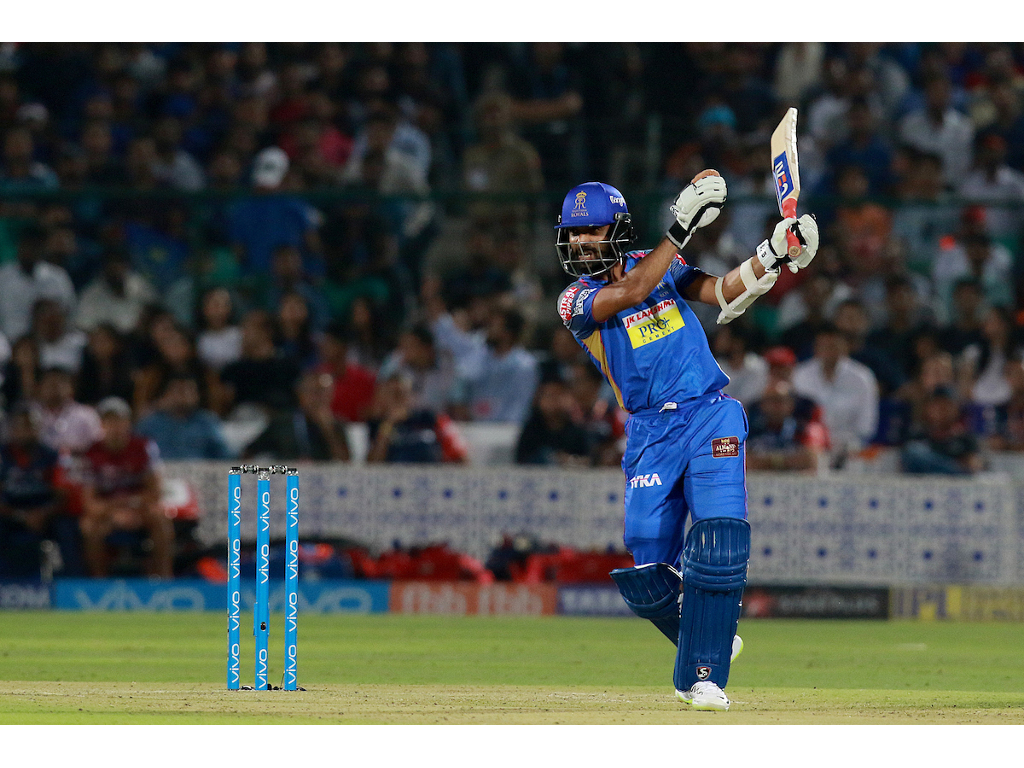 The last five T20 matches played at the Sawai Mansingh Stadium have all been won by the side bowling first. That fact might have been a concern for the Royals statisticians, but the fans in the packed stands were delirious to have their old heroes – and some new ones – poised to parade their skills in front of them once more. The ground was packed with supporters looking forward to a feast of cricket and legendary mentor Shane Warne was in the Rajasthan dug out. Hopefully his players would succeed in putting a smile on his face.

Rahane and D’Arcy once again opened up for the Royals – with Trent Boult taking the new ball for Delhi. The tall New Zealand left armer secured some early swing and almost snaffled both Royals openers in his first set of six. When Nadeem came on at the other end, Short was seeing the ball well, soon sending the ball to the boundary. However, disaster struck D’Arcy again with another run out – Short ending up short of the crease for the second match in a row. Lightning clearly does strike twice for the Aussie as the bails lit up once more after a direct hit from an opposing fielder. That dismissal brought another overseas international to the crease – England’s finest Ben Stokes, and in scampering for a single to get off the mark he was almost run out too. Close shave.

Stokes scored his first boundary off the 15th ball of the match – coming down the wicket to dispatch Boult through the covers. He looked like a man who meant business – and off the fourth ball in the third over he confirmed it with a towering six over square leg. Vivid memories of Shane Watson swatting the ball to all parts of this ground came to mind – a similar spectacular from Stokes and the Delhi bowlers would certainly be left in a sweat…

However it wasn’t to be. A nick off an incredible outswinger from Boult was caught behind by Pant and Big Ben was on his way for 16, to be replaced by Sanju Samson. The Mighty Indian scored a four off the second ball he faced – taking advantage of the rapid outfield – and then decided to dispense with the outfield altogether, hitting a maximum off his next ball. That signalled a shift in momentum – with the Royals’ Samson / Rahane partnership starting to flourish. Sensible singles were interspersed with lusty blows to the ropes and it felt like the Royals 2018 Campaign was well and truly underway.

Captain Jinks played the anchor role as Samson took the fight to the opposition. Facing off spinner Nadeem he hit a powerful six and then followed that up with a delicate late glance for four down to third man. It was ‘Beauty and The Beast’ batting by Sanju – and the fans loved it. At the end of the ninth over, the Royals were coasting along nicely at 77 for 2 – and perhaps Gambhir was regretting his decision to insert Rajasthan.

After the strategic time out, Jinks started to show more aggression – striking the ball to the fence and bringing up the 50 partnership. Suddenly the Delhi attack started to look a little ragged, but then Sanju was the victim of an outrageous slice of bad luck – bowled off bat and pad for 37. His 86 runs in two innings might have elevated him to second place in the tournament batting stats, but that will be little consolation he looked so well set.

This unfortunate series of events for Samson summoned Jos Buttler to the crease, no doubt eager to impress after missing out against the Sunrisers. Whether he was feeling the pressure or not he didn’t show it – impudently reverse sweeping the second ball he faced for four. Rahane employed the same shot as he approached fifty – but then surprisingly misjudged a push through mid-wicket, presenting a catch off his leading edge to Boult in the covers. The skipper’s 45 from 40 balls was an excellent knock, but like Sanju he would be frustrated that he didn’t push on and totally take the game away from the opposition.

A tight 15th over from Shami combined with two new batsmen at the crease slowed the Royals innings down. At 117 for 4 off 15 overs, aspirations for an imposing target started to be revised downwards. Could Buttler and Tripathi elevate them? Boundaries were suddenly elusive, but the Royals pair still intelligently milked the spin bowling for 1’s and 2’s.

The return of Boult yielded a different approach – with Tripathi sending him over the rope (via the hands of a Delhi fielder) for 6. Two balls later Jos did exactly the same. These were two crucial blows which had they been slightly less powerful could have been caught – perhaps the luck that had been recently deserting the Royals was returning?

Buttler was clearly starting to enjoy himself – another six soon followed, this one over long on, bringing up the Royals 150. However two balls later he walked across his stumps and was bowled for 29 off 18. Another frustrated Royals batsman returned to the dugout, but looking at it positively, another batsman had found form, which will hopefully stand him in good stead for the rest of the tournament.

At that point the heavens opened and rain halted proceedings – a shame with the Royals innings progressing well. With 13 balls to go and two powerful middle order batsmen at the crease, Rajasthan could have been looking at setting Delhi a target over 180, no easy task batting second at Jaipur. Unfortunately, the rain clouds had different ideas. A deluge descended and the ground was rapidly soaked.

Just before it was too late, the rain relented and the statisticians really entered the fray. A six over game was possible – and a target for Delhi of 71 calculated. The ball would be wet for the Royals bowlers, but then again the outfield would be damp and potentially slower for the Delhi batsmen too. Game on!

Maxwell versus Gowtham was the first match up – with Monro at the other end. Not for long though! A risky single attempted by the non-striker and quick work by Buttler ensured he was on his way back to the hutch without facing a ball. Every batsman’s nightmare! It looked like the Royals’ leadership’s audacious decision to start with a spinner might just pay off. However two fours for Pant led to the over going for 10 – and Delhi were only just behind the required rate.

Kulkarni was chosen to bowl the second over and the first two balls were beauties – cramping the batsmen for room. More tight bowling and supremely clever pace variations led to the over only going for 5 – a superb effort and the power play fielding restrictions were now over. Advantage Rajasthan.

Unadkat took the ball for the third over. The first three balls were immaculate, with Maxwell swinging his bat like a Canadian lumberjack wielding his axe – but missing the leather by miles. When he finally made contact, he luckily edged the ball for four down to third man. This seemed to galvanise the Aussie. The next ball went for a massive 6. The next for 4. Had the pendulum swung?

Next up for the Royals, Ben Laughlin. He bowled full and straight and deserved a wicket when Pant skied the ball into the stratosphere – only for the ball to hit the turf. That drop brought danger man Maxwell onto strike – and this time the catch didn’t go begging – a snick landing in the safe gloves of Jos Buttler. A big moment and the English gloveman right in the middle of proceedings for the second time. Laughlin’s over was a beauty – no boundaries scored from it.

Unadkat was summoned to bowl the fifth over – and again the ball went high into the air only to evade Royal hands. His second ball was to new batsman Chris Morris – sliced for 4. Third ball also sliced – but clever field placement cut it off. Just a single this time. The next ball went for another 4, then a dot and the final ball again went high – oh so high into the sky – surely not another skier not caught? Out!  A superb catch by Gowtham!

Laughlin was asked to bowl the last over, not surprising bearing in mind his earlier heroics – and he soon grabbed a wicket for himself – caught by Ben Stokes. He closed the game down nicely and the Royals in the end won comfortably by 10 runs.

The Royals IPL Campaign was off and running – their first win and two points on the board. This victory was thoroughly deserved for an excellent bowling performance under pressure and some excellent batting earlier in the evening.