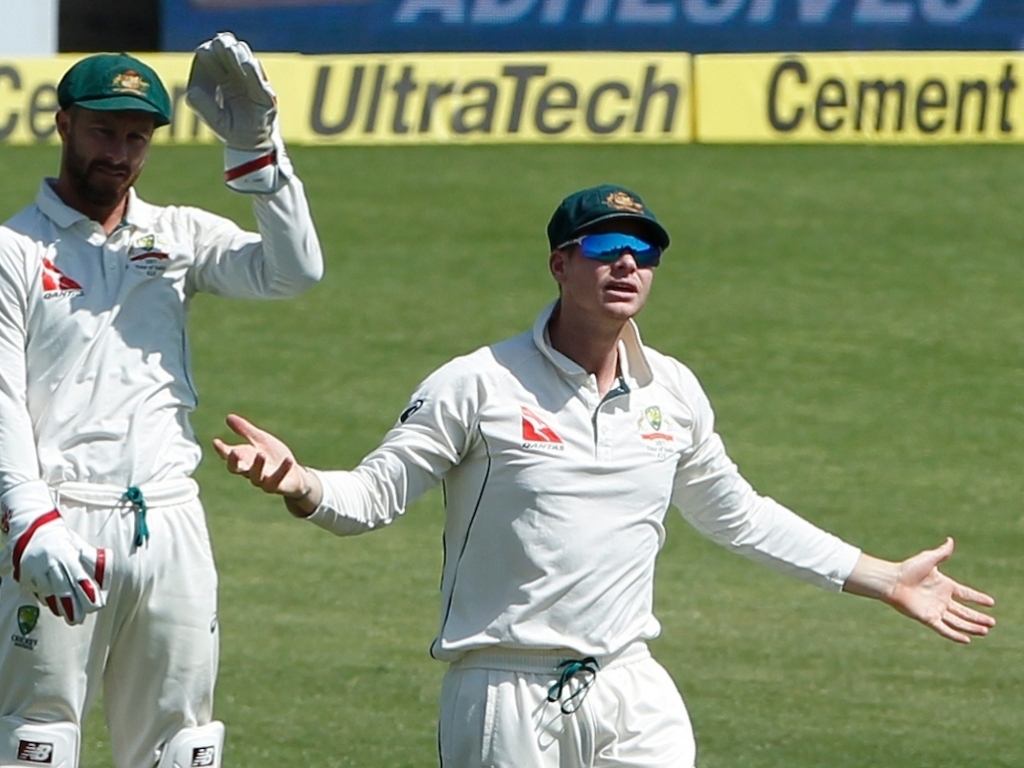 Australian skipper Steve Smith demonstrated what appeared to be a spectacular set of double standards during play on day three of the fourth Test against India.

Josh Hazlewood edged Ravi Ashwin to slip with Australia on 137 and Murali Vijay claimed to have taken the catch cleanly.

Replays weren’t 100% conclusive but it appeared likely that the ball touched the ground before nestling in Vijay’s fingers.

Star Sports broadcast images of Steve Smith in the Australian dressing room and caught him mouthing what appeared to be the words ‘f***ing cheat.’

The irony of this will not be lost Indian fans and neutrals alike although it is unlikely to perturb the dyed in the wool Baggy Green supporters.

It would seem that Vijay’s decision to rush off the field to pad up was seen as an effort to deceive the umpires and Hazlewood but more likely the opener legitimately thought he had held a clean catch.

Speaking after play Graeme Hick Australia’s batting coach was keen to downplay the issue saying: “Having fielded in slip or close to the bat myself sometimes you’re not 100 per cent sure. He would have felt that go into his fingers and felt it was a clean catch.

“Once the batter or whoever it may be is gone to the review than fair enough, maybe the fielders should stand around and wait.

“The process is in place. At times the series has been a little bit heated but I think this game has been played in very good spirit and he obviously thought he had a clean catch. It goes upstairs, come back and get on with the game.”

Things got a little heated earlier in the day between Ravindra Jadeja and Australia wicketkeeper Matthew Wade when the left-hander was batting and said something to the keeper in Hindi.

Umpires had to settle things down as the Australians around the bat and Jadeja became increasingly aggressive.

Both players would later downplay the incident with Jadeja saying after play: “I was just telling Wade that we will meet and have dinner once you guys have lost the Test.”