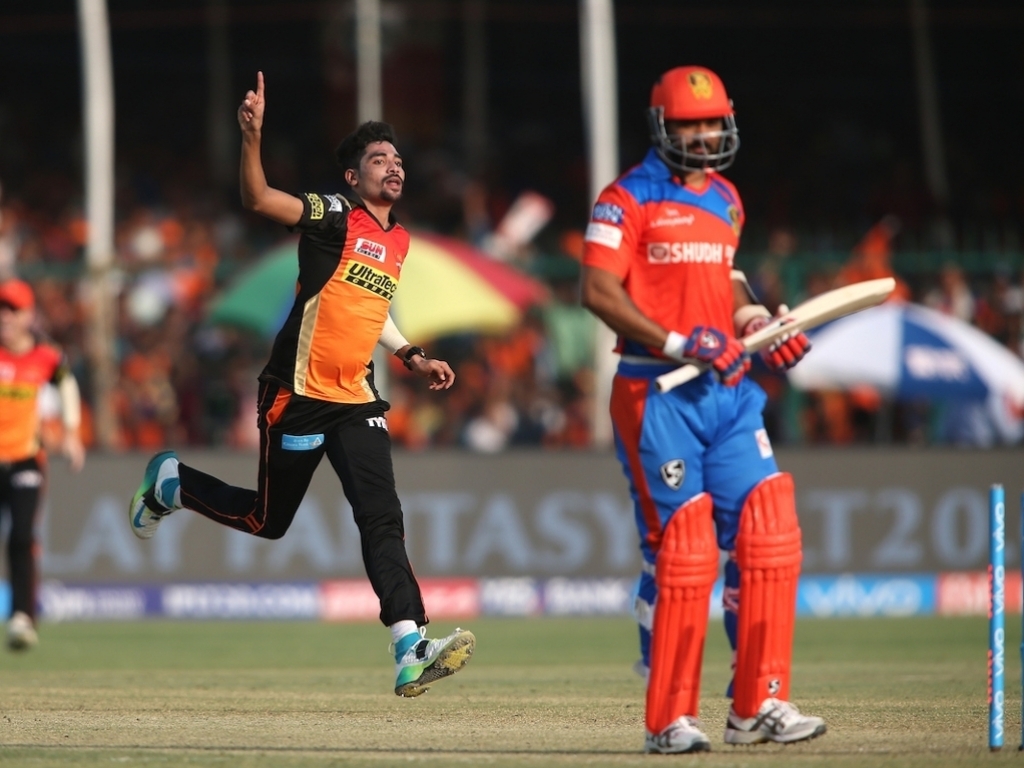 The Sunrisers Hyderabad clinched a spot in the playoffs with an emphatic 8 wicket victory over the Gujarat Lions at Kanpur’s Green Park.

The Lions looked set to post a big total after a great start but collapsed from 111 without loss to 154 all out.

After the great start only Ravindra Jadeja (20*) could get into double figures and in the end the target looked to be a boatload light.

The chase suffered just one hiccup as Praveen Kumar struck twice in his second over to remove Shikhar Dhawan (18) and Moises Henriques (4).

Opener and skipper David Warner played a more restrained innings than we are accustomed to seeing hitting 69 off 52 balls.

The Sunrisers clinched a playoff spot in Kanpur with a big win over the Gujarat Lions https://t.co/ykABC7DPIM #VIVOIPL via @ipl

Vijay Shankar (63*) came good when it counted smacking nine fours and seeing the Sunrisers through to an eight wicket win that has secured them a playoff spot and may yet get them into the first qualifier where the winners go straight into the final.

Lion’s skipper Suresh Raina has had to deal with a lot of disappointment this season but feels the team learned a lot saying after the match: “We don’t have those good experienced bowled, credit to other teams who executed their plans really well.

“This year was a learning point. Thanks to all the Gujarat fans, Kanpur has always been good for us. Disappointing season. The groundstaff work so hard in the heat. We didn’t bat well.”

His opposite number Warner will be looking to guide the Sunrisers to a second consecutive IPL Final, he said: “Would have been (had they been eliminated).

They got a flier, I was scratching my head there for a second. When we got wickets back to back, it showed the wicket was slowing a bit.

“Credit to the bowlers, Siraj, the way they brought it back was fantastic. Some fantastic bowling units around in the country. Shows what talent you have here, especially in the T20s and ODIs. Get a little bit of luck, trying to bat with each other.

“A bit of pressure on us to make that top four. 100%, but we knew two quick wickets. It’s about not worrying about the next couple of games, take each game as it comes. Keep backing our skills.”

Man of the match Siraj credited Bhuvneshwar Kumar with helping him as a bowler: “In a pressure match, I got the Man of the Match. Wicket was slow, that’s why had to take pace off the ball. Bhuvi bhai tells me what to bowl.”

The result turns Sunday’s clash between Rising Pune Supergiant and the Kings XI Punjab into a knockout match.