The Knight Riders regain top spot with victory over Tridents 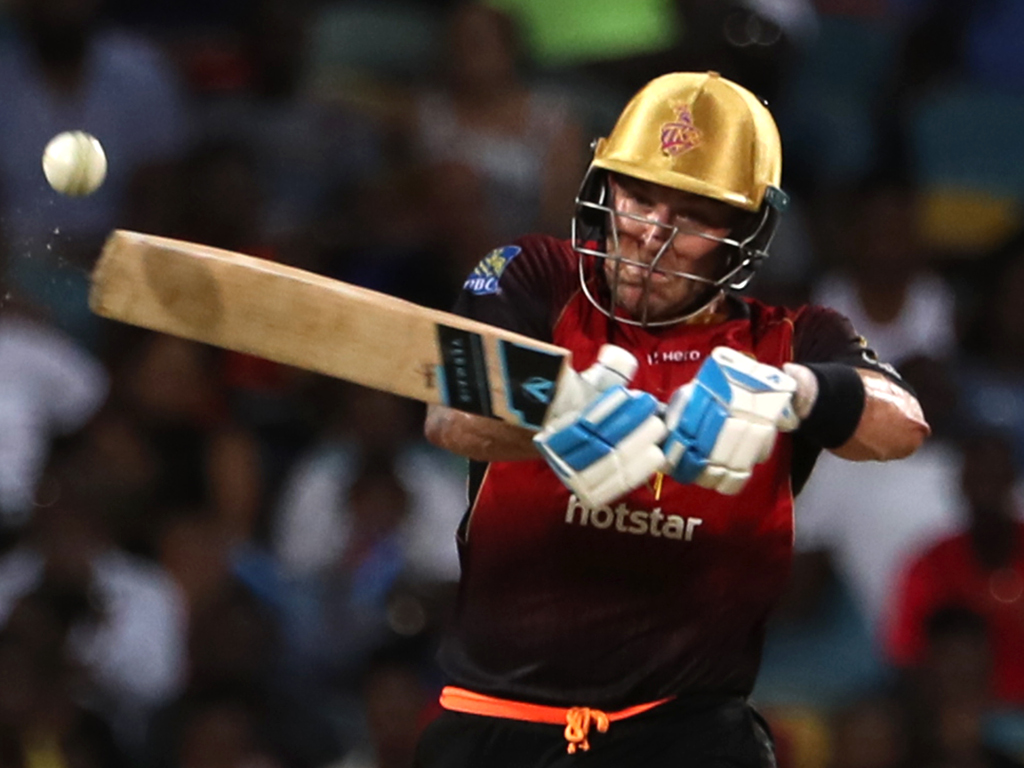 Trinbago Knight Riders went top of the Caribbean Premier League (CPL) table with a four-wicket victory over Barbados Tridents at the Kensington Oval.

The defending champions had to work hard to chase down a victory target of just 129, but got there thanks to Brendon McCullum’s swashbuckling, counter-punching 66 from 42 in a decisive 66-run partnership for the fifth wicket with Denesh Ramdin. The Knight Riders join Jamaica Tallawahs on eight points, but have a game in hand on the Tallawahs and a healthy net run-rate advantage.

The Tridents were immediately placed on the back foot when losing three wickets in the second over of the night after opting to bat first and never truly recovered as they scrambled to 128/8 from their 20 overs.

Khary Pierre bowled Dwayne Smith with his first ball before Shamar Springer was run out looking for a single to get off the mark. Best of the lot, though, came two balls later. A gorgeous, dipping delivery drew Australia star Steve Smith out of his crease before spinning sharply past his outside edge for Ramdin to complete the stumping.

Shai Hope and Nicholas Pooran shared an enterprising 70-run partnership for the fourth wicket, but after Pooran was bowled for an eye-catching 34 from 21 balls by Dwayne Bravo the life was sucked out of the innings.

Fawad Ahmed removed Hope for 42 from 34 and Tion Webster – a second stumping of the night for Ramdin – in the 13th over, leaving Jason Holder to ensure the Tridents batted out their allocation.

Raymon Reifer fell to Ali Khan for 10 as Dwayne Bravo collected his 200th catch in T20 cricket. Number 201 was not far from behind, coming off his own bowling as Holder chased a wide, slower delivery and sent it straight up in the air to depart for 30 in the penultimate over.

Batting proved just as tough for the Knight Riders early on as Mohammad Irfan backed up Saturday night’s record-breaking one-run spell with more new-ball heroics for the Tridents.

HOWZAT!! Check out some awesome wickets from match 18 of #CPL18 pic.twitter.com/JeVgQ2TI4k

Once again he dismissed both openers, just as he had against St Kitts & Nevis Patriots, as Chris Lynn and Sunil Narine both perished to catches in the deep. Narine, though, did manage to strike his 100th T20 six in his 13 from 10 balls.

ALSO READ: Irfan heroics in vain as Patriots down Tridents

Colin Munro, the Knight Riders’ main man with the bat this season, departed soon after for just 14 when bowled via the pad by Ashley Nurse. And when Darren Bravo miscued Raymon Reifer’s first delivery to deep midwicket the Knight Riders were 60/4 and the Tridents daring to dream.

The window of opportunity was brief, though, and soon slammed shut by McCullum. Things might have been different had Dwayne Smith accepted a simple catch at mid-wicket offered by Ramdin when his and McCullum’s ultimately match-winning partnership was in its infancy. A wicket then would have left the Knight Riders 63/5 in the 11th over.

Reprieved, Ramdin combined with McCullum to take 44 from the next three overs in a flurry of boundaries that ended the match as a contest.

Both men fell with the victory line in sight, Ramdin caught on the fence trying to hit Springer for the match-winning boundary before McCullum top-edged an attempted sweep to hand Steve Smith a wicket, but the job was well and truly done by that stage with just three runs required and almost four overs to get them. Dwayne Bravo completed the formalities with a four through the covers.

While the Knight Riders jump from third to first in the standings, back-to-back defeats have left the Tridents with work to do to reach the play-offs.