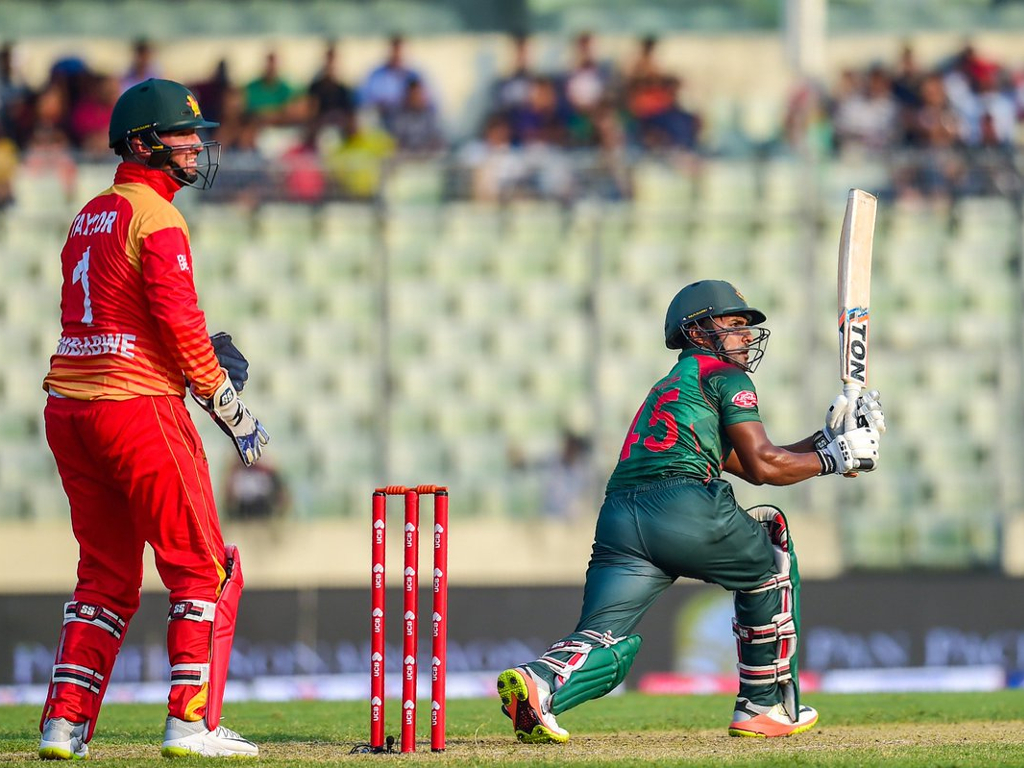 A 148-run stand between Bangladesh’s openers helped them secure a seven-wicket win and an ODI series victory over Zimbabwe in Chittagong on Wednesday.

Zimbabwe ran up a seemingly decent total of 246/7 having won the toss and batted first. There were solid efforts throughout Zimbabwe’s batting order, with all of the top six reaching double figures.

Wicketkeeper Brendan Taylor led the way with a 73-ball 75 after Hamilton Masakadza and Cephas Zhuwao had laid a decent platform. Masakadza made 14 in quick time before edging a drive to the keeper off, while Zhuwaoalso holed out to long-off needlessly with Zimbabwe 70/1.

Taylor’s runs came at a good time. He has long been considered the premier batsman in the Zimbabwean set-up, but had not made a half-century since March. He looked in great touch, striking nine fours to go with his solitary six before he was trapped in front going for a reverse sweep off the bowling of Mahmudullah.

Taylor had batted Zimbabwe into a position of strength – 147/2 in less than 30 overs – from which they should have been able to make a score close to 300. But though Sean Williams and Raza batted well enough for their 40s, they may reflect that they didn’t attack the bowling enough. Williams in particular struggled, striking just two fours in his 76-ball knock before bottom-edging a cut to the keeper off Saifuddin.

Sikandar Raza’s 49 was a more industrious knock, containing three fours to go with two huge sixes, but he fell a run short of 50, edging a slower ball from Mashrafe Mortaza through to the keeper. PJ Moor then top-edged Mustafizur Rahman to Mehidy Hasan Miraz for 17 and Elton Chigumbura slashed Saifuddin straight to the man on the point fence for a nine-ball 3 as Zimbabwe stumbled in sight of the finish.

Brandon Mavuta and Donald Tirpano batted out the overs, but neither could find any big blows to hurt Bangladesh. The home side were steady with the ball, never losing their cool even as partnerships developed. Saifuddin was the pick of the bowlers, claiming 3/45, while Mustafizur was parsimonious, conceding just 35 from his 10 overs.

Still, at the halfway stage the game looked set to be an intriguing contest. Instead, Bangladesh’s in-form opening pair turned it into a cruise.

Both Imrul Kayes and Liton Das have hit memorable hundreds recently. Das was coming off the back of a memorable maiden ODI hundred in the Asia Cup final, while Kayes had made his highest ODI score in the first game of the series against Zimbabwe. Both looked in the mood to repeat their feats, and though neither could go onto a landmark, they did more than enough to secure victory for their side.

Das was the more aggressive of the two, striking at well over a run a ball, and striking 12 fours and a six to Kayes’ seven fours. The two complemented each other, and though Kayes was no slouch, he did well not to try and match his more belligerent partner stroke-for-stroke.

Their 148-run stand broke the back of the chase, though it looked for a moment as if Zimbabwe might surge back into the contest as Raza claimed two wickets – first Das for 83, slicing to cover point, his enterprise finally causing his downfall, and then Fazle Mahmud, stumped after a stumble from the batsman and a juggle from the keeper.

At 152/2, Bangladesh only needed one more partnership – someone to stick with Kayes – and Mushfiqur Rahim played the situation perfectly, rotating the strike, putting away the bad ball, and relieving all pressure.

Kayes fell for 90, holing out unnecessarily to long-off, but it was too little too late, and Mohammad Mithun’s attractive cameo sealed the deal. The result was confirmed with a six, emphatically underlining the difference in class between the two sides that has become evident as Bangladesh sealed the series