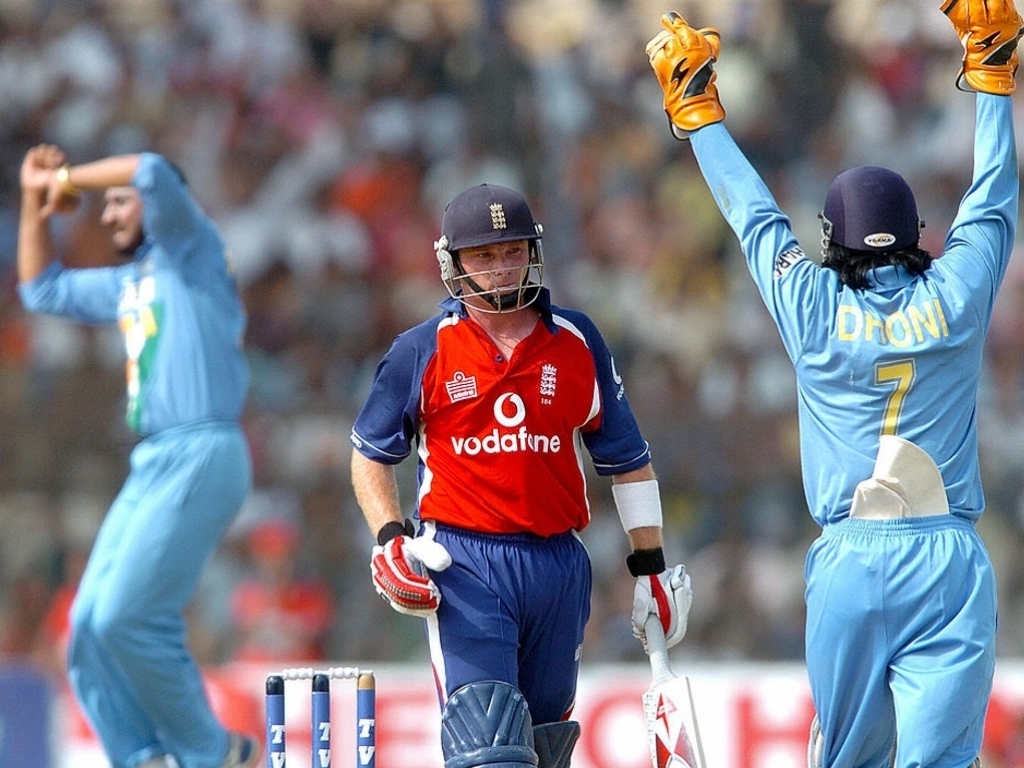 With 50 days to go for the Champions Trophy 2017 in England, the ICC announced eight eminent cricketers, one from each participating nation, as the ambassadors of the tournament.

Harbhajan Singh and Ian Bell, the ambassadors from India and England respectively, were involved in two thrilling encounters in previous editions of the tournament.

The pair sat down for a chat about the tournament with the ICC, Harbhajan recalls his game-changing spell against South Africa in the 2002 semifinal – ‘with assistance from Sri Lankan weather’ – and Bell reflects on the 2013 final, which England narrowly lost to India. Excerpts:

England still haven’t won a major ICC 50-over trophy – in 2013, at home, you lost by just five runs in the final. Tell us about the experience.

It was gutting to get so close and the one thing as a cricket nation we’re missing is a fifty-over trophy. We’ve obviously done really well in recent Ashes series, having won five out of the last seven, so to add the Champions Trophy to the mix would be great. Playing in an ICC Trophy at home was an amazing experience, and although it was difficult not to go the whole way and win it, the experience was out of this world. I got Man of the Match against Australia at Edgbaston, and getting that recognition on your home ground is something you don’t forget.

You had four pacers and one spinner, and India had two frontline spinners plus Suresh Raina, and they picked up four of the eight wickets to fall. Was it down to poor luck or did India read the conditions better?

I suppose you could argue that. Towards the end of the tournament the surfaces got very dry and it wasn’t typically a wicket an England team would play a home ODI on, so it really did suit India quite well. And as we know, when Edgbaston does get dry, it can spin. So, possibly they read the conditions better, but we’d previously had so much success with how we lined up that we definitely backed ourselves to do the business. At the end of the day, we were just off the pace. But I still think we should have won the game.

Tell us about the dressing room atmosphere that day – it became a Twenty20 match; how much do plans change based on that, especially when you can’t change your XIs?

The atmosphere was just full of excitement really. When you get to a final in a big tournament, everyone’s massively up for it, and that day was no different. From memory, we actually tweaked the rules a bit, as there was an opportunity to shake hands and share the trophy, but I don’t think anyone of us wanted that. Both sides wanted to win the Cup outright on the field, but unfortunately it didn’t go our way. At that point as a fifty-over side, I felt we had it, but these things happen.

The tournament is in England and Wales again, and England is a much more rounded limited-overs team, the performances reflect that.

The experience the guys have got from playing around the world, whether that be Big Bash or IPL, has really elevated our team. Playing against the best guys in the world does that to you, as does playing in different conditions, and we’ve seen the improvement in our white-ball skills reflected as a direct result of that.

How far do you think this team can go, and why?

We’ve got as good a chance to win now as any time. In fact, I reckon we will do it. The power we have batting right the way down to ten is a massive bonus for us and with our bowling attack as well, we’re a match for any side. Our strength recently has been getting big scores with the bat, but I think our bowling can match it also. Obviously other teams will think they can win it, and rightly so, but I don’t think England should fear anyone and nor will they. I back England at home more than not, and if they play at their best, I can’t see anyone beating them.

What is the first thing that comes your mind when you think of the tense Champions Trophy 2002 semifinal against South Africa?

What I remember about the game is Yuvi taking a brilliant catch off my bowling. Jonty Rhodes tried to play a sweep shot and got a top edge and Yuvi took that brilliant diving catch at short fine leg. And then, Boeta Dippenaar got out after one more ball on zero. Jonty was batting really well and it was an important wicket.

When Herschelle Gibbs was batting, we thought the game was going out of our hand but certainly he was getting a lot of cramps thanks to Sri Lankan weather. The weather also helped us get back into the game as Gibbs went out of the field. Suddenly we took one brilliant catch and then Dippenaar got out, and suddenly they were 4 down for 190-200 and then Zak bowled a brilliant spell to get a couple more wickets.

It was a brilliant game to be a part of. Happy to have been there contributing to a famous win.

You were the main offspinner but you finished your spell by the 41st over. What was the strategy during those tense moments?

Sourav told me it’s important for you to bowl now because there’s no point in you bowling later on when things are just out of control.  He told me to try and pick up a wicket here. Try and bring another guy in the circle and let’s see if we can pick up a wicket. That’s how I was brought into the attack again and I got those two wickets, and we were suddenly back in the game.

And of course, the Sri Lankan weather played a big role as well. The way Gibbs was batting, he was going really really strong. But we were waiting for one piece of magic which Yuvi provided, and it all changed.

Is the Champions Trophy a tougher tournament than World Cup, with nearly all matches being of the do-or-die variety?

I won’t say the World Cup is tougher or that the Champions Trophy is tougher. Every game is tough. But yes, these events, World Cups or Champions Trophy, bring with it added pressure. It’s not like you’re playing just against Sri Lanka or in a triangular series, it’s about winning the title.

You have to play different teams and you have to play according to different players in a very short span of time. That brings a challenge for each and every player. It’s nice and quite challenging as players to go out there and perform every second day when you’re playing different oppositions.

Yes, it did to an extent. While we’re playing that and came so close to winning it, it gave us a lot of confidence. When you play well in such tournaments, it gives you belief as a team about what you can achieve. That 2002 Champions Trophy gave us a lot of confidence going forward. When we went to South Africa for the World Cup in 2003, we knew that if we could play the kind of cricket we can play, we will be a difficult side to beat. And that’s exactly what happened. That’s what good teams do, these are the tournaments that bring teams together.

It helped us get to where we went in the 2003 World Cup. We lost only to Australia in the World Cup, but they were the best side in the tournament. They had beaten every opposition and both times, we were beaten by the best side, which was Australia. We knew that we had to come even better prepared to beat these guys. That’s exactly what happened in 2011. Yes, it was a big gap in between but it was hugely satisfying that I was on the winning note at least once in that big tournament.

Was it the tournament when friendships were formed? You were there along with Nehra, Yuvraj, Sehwag, Kaif and so many more…

Such tournaments bring you close to each other. You give absolutely everything for the person that sits next to you. Because such tournaments are not about individuals performing. It’s about the team coming together and that’s exactly what happened for us. We did things for each and every one out there.

Of course, it helped build our friendship, it built our belief. It built us as a family because we spent a lot of time together. When you play such tournaments, it gives you an opportunity to come closer and know your teammates better. You can’t play as individuals, you have to play as a team to clinch the Cup. I always believed that you have to play World Cup and Champions Trophy not just to participate, you have to go there with intent to win it.