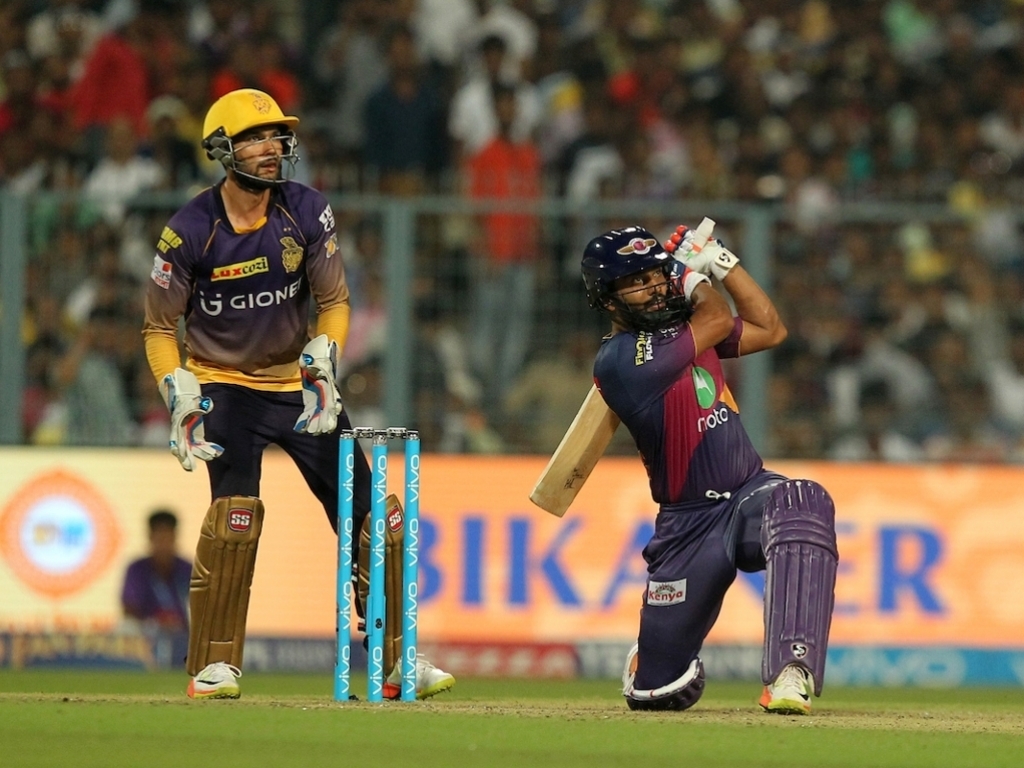 A thumping knock of 93 from Rahul Tripathi saw the Rising Pune Supergiant cruise to a 4 wicket win over the Kolkata Knight Riders.

The Knight Riders earlier posted a total of 155/8 in their 20 overs with handy contributions from Manish Pandey (37) and Colin de Grandhomme (36).

In the end that total proved to be nowhere near enough with Tripathi going hell for leather despite losing four partners along the way.

KKR’s designated pinch hitter Sunil Narine failed to come off after as he was caught and bowled by Jaydev Unadkat for a duck.

Washington Sundar picked up a brace of wickets the first of which was slightly fortunate for him as Sheldon Jackson (10) trod on his stumps while completing a shot.

Sundar then removed mister consistency Gautam Gambhir (24) to leave KKR struggling on 40 for 3 as the powerplay drew to a close.

However De Grandhomme and Pandey came together to get the innings back on track, the pair put on 48 before Pandey fell to Dan Christian.

Sundar’s figures of 2 for 18 made him the pick of the RPS bowlers.

The RPS batsmen were content to turn the strike over to the rampaging Tripathi throughout the innings.

Ajinkya Rahane (11) tried to run an Umesh Yadav delivery down to third man but it got big on him and he could only nick off through to the keeper.

The further loss of Steve Smith (9) and Manoj Tiwary (8) both bowled by Chris Woakes did little to deter the young opener from his shot making.

Ben Stokes (14) could not repeat his heroics from the last outing, where he smashed a hundred, the Englishman top edged Narine who sprinted to mid on to take the catch himself.

You’d normally back MS Dhoni to easily guide RPS across the finish line but left-arm wrist spinner Kuldeep Yadav had him caught behind for just 9.

Tripathi holed out to a Woakes slower ball with his hundred and the win beckoning.

Nerves may have started to jangle after that wicket but Dan Christian rose above the nerves and with four needed off five balls he smashed De Grandhomme for six.