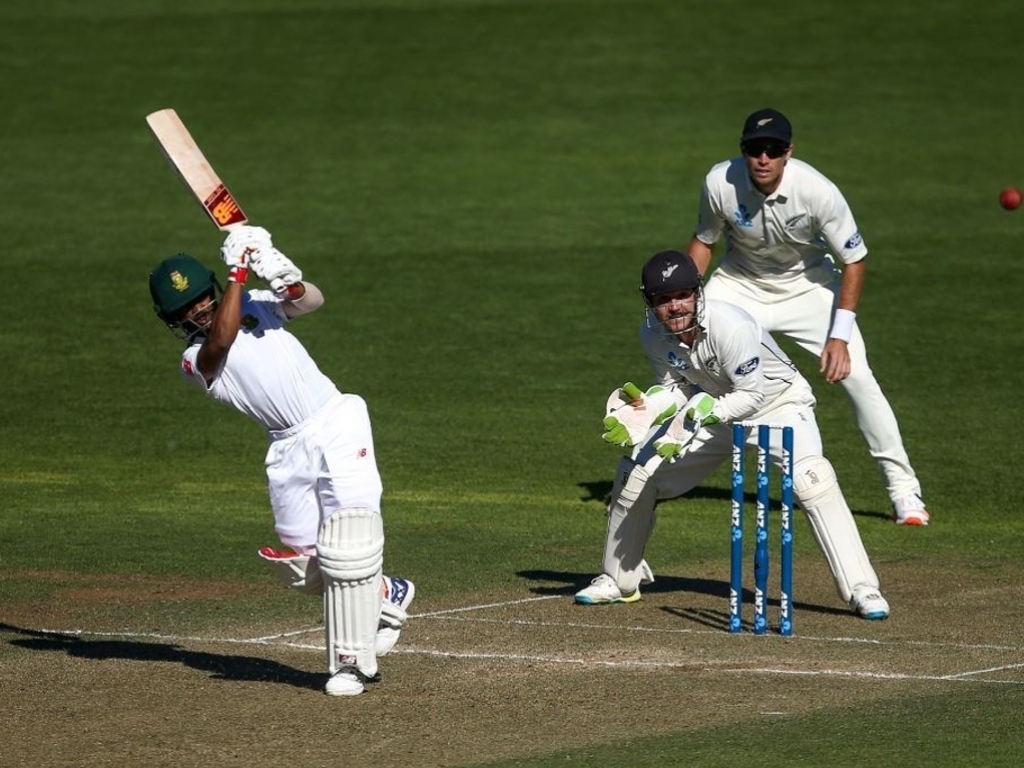 A wonderful partnership of 160 runs between Quinton de Kock (91) and Temba Bavuma (89) wrestled the advantage to South Africa, who have an 81-run first-innings lead with one frustrating wicket in hand.

South Africa are 349 for nine and will look to add a few more quick runs before bowling tomorrow morning, the time of day that has caused the most trouble for batsmen in this lovely Test at the Basin Reserve in Wellington.

New Zealand had had South Africa on the ropes during the morning session when the visitors found themselves on 94 for six and somewhat unlikely to get anywhere near the Black Caps’ first innings effort of 268 runs.

It had been a glorious morning session for the hosts as they reduced made further inroads in dismissing their opponents, who had been 24 for two overnight. Nightwatchman Kagiso Rabada (9) was the first to fall, bowled by Tim Southee (2-98). JP Duminy (16) and Hashim Amla (21) were then both out in similarly soft dismissals, both caught at midwicket in lapses of concentration. A spot of bother quickly became a crisis when Faf du Plessis (22) was caught behind off Colin de Grandhomme (3-52) before lunch.

It was a collapse that showed the potential fragility of a batting order that is missing AB de Villliers and is under pressure because of the lack of form of Stephen Cook, Duminy and others

If the morning belonged entirely to New Zealand, the afternoon session could not have been more different as de Kock and Bavuma batted the whole session, merrily eating up the deficit as they went about their business. A definite short-ball strategy by Southee and Neil Wagner (3-96) went largely in vain as the left-hand, right-hand duo piled on the runs and dampened the spirits of New Zealand, who squandered a fantastic position in the process. 114 runs came off 28 overs in the middle session.

Kane Williamson was also notably defensive after lunch as he set fields with few men in close catching positions and ample opportunities for ones and two to the boundary riders. On a pitch that seems to be getting even flatter with time, it was just too easy for the two classy batsmen.

Neither one quite managed it to triple figures but the job at hand was more important than achieving that milestone and they have put their side in a position from which they now may be able to dictate terms in this match.

Quinton de Kock told us after the day’s play, “My mindset was to not get bogged down I played my natural game to try shift the pressure back onto them. It had to be done.

“Jeetan has got me out four times but it was nice to get one over him,” he added.

Bavuma did eventually fall to a short ball from Wagner as he tried to pull one from well outside off and holed out in the deep. It was the end of a magnificent stand and fortunately for South Africa, its tail would wag and more yet more pain for the hosts was on its way.

Vernon Philander (36 not out) looked like he meant business as he kept reliable company for de Kock, who nicked off in the nineties but will be hugely relieved by his big score and the way he handled Jeetan Patel (0-53). Maharaj (1) didn’t last long but Morne Morkel (31 not out) outscored Philander in a partnership that added insult to the already injured pride of the Black Caps.

South Africa thus find themselves in the enviable position of having a healthy lead in this match, where there are still three days of fair weather forecast. New Zealand never give up easily but it will take some turnaround for them to recover from having lost the day two battle in the Basin.