Warner prepared to work for runs 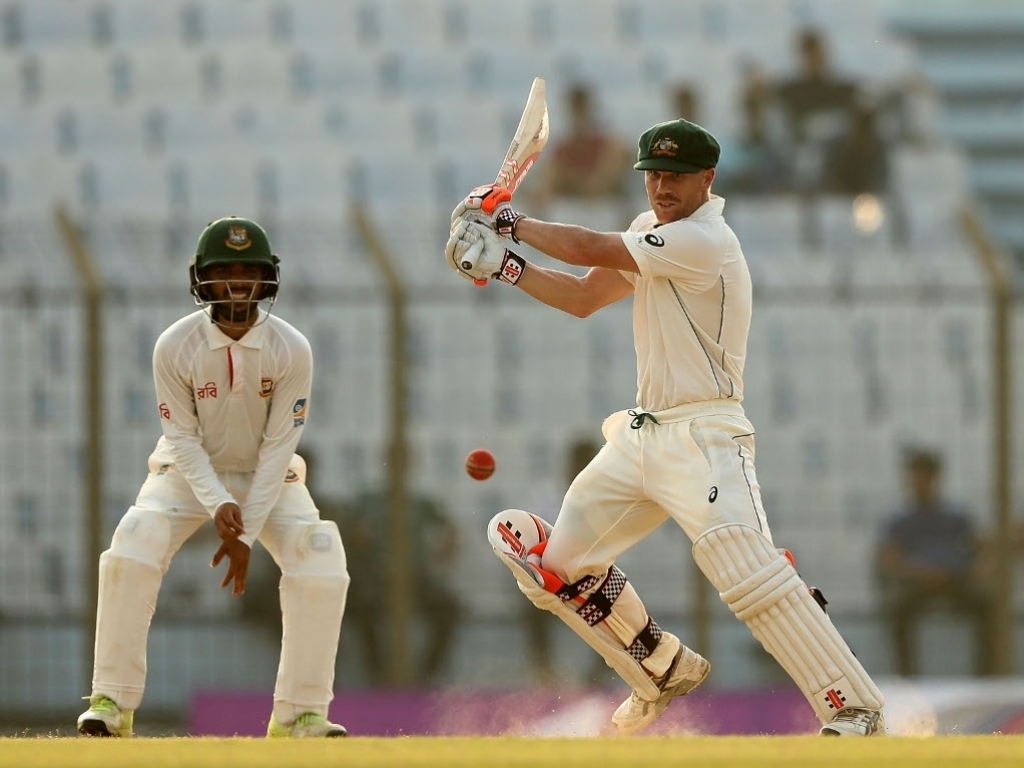 Australia opener David Warner is known for getting his runs in a hurry but his patient 123 against Bangladesh in Chittagong showed how he has matured.

It took him 209 balls to reach his hundred making it the slowest of his twenty Test centuries but probably one of his most vital.

With Bangladesh looking to restrict his scoring he was content to nudge ones and twos in the intense heat experienced on the opening two days of the second Test against Bangladesh.

Speaking after play Warner said: “You pretty much felt in from ball one with the fields that they set, they didn’t really have any attacking men around the bat compared to last game.

“It allowed me just to rotate the strike and not really have any need to leave your crease all the time.

“At the end of the day, they try and shut down the scoreboard. They try and cut your boundaries out and play that way, try and get you caught around the crease and obviously look for that lbw dismissal or bowled through the gate.

“If you can negate that and you can manipulate the field, you’re going to be facing a lot of balls and you’ve got to be prepared to bat long periods of time.”

Warner described the conditions in which he notched his second successive Test hundred as some of the toughest he has ever played in.

He added: “I always talk about trying to bat long periods for time in these conditions and by far that’s the hottest I’ve ever played in. It was quite challenging to be out there. Coming off yesterday, it was every minute that I was out there.

“We were out there for 100 overs the day before. A lot of credit has to go to the two fast bowlers as well. The amount of work that they’ve put in, I think they’ve both bowled 20 overs apiece in this heat. It takes someone with some good fitness to bowl through that, definitely.”

Warner feels that he has come close to cracking the code when it comes to batting in Asia after a long barren streak.

The left-hander feels that you need to play to a plan and stick to it religiously.

He said: “It’s a tough environment to come out and try to play your shots and play your natural game.

“You have to find a way and for me it’s taken almost 16, 17 Tests in these conditions to work out what my game plan is and stick to it. As I said before, they play on your ego a little bit, they shut down your runs, they shut down your boundary options, and you’ve got to milk the ones.

“You’ve got to be prepared to bat time and you’ve got to have the fitness edge as well to do that. That’s probably the thing that’s going to keep motivating me more now to show to myself that I’ve done that, and now moving forward I can achieve the same success that I’ve had so far over here moving down the line.”

Australia may have built a 72 run lead but have just one wicket in hand after a string of wickets in the final session leaving the game in the balance.