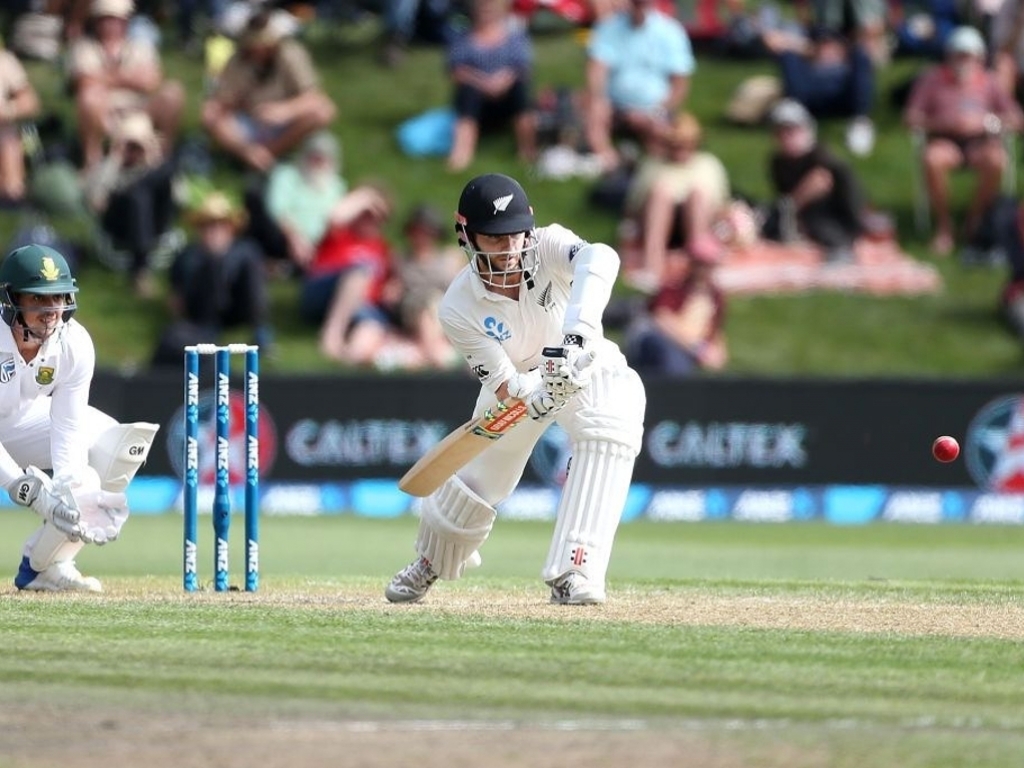 A chanceless captain’s knock by the stylish Kane Williamson (78 not out) guided New Zealand to a strong position at stumps on the second day of this old-fashioned Test match.

The Black Caps are sitting pretty on 177 for three, 131 runs behind, but one of their star batsmen, Ross Taylor (8*) retired when he tore his calf muscle and may not be able to take the field again this match.

South Africa were earlier bowled out for 308 when then they lost their last six wickets for only 56 runs. It was a spirited bowling performance from the trio of Trent Boult (4-64), Neil Wagner (3-68) and Jeetan Patel (2-85) that contained the visitors and prevented them from adding extensively to their overnight score of 229 for four.

Dean Elgar (140) managed to better his previous top score but the fact that none of his seven centuries has turned into a “big hundred” will irk him considerably. It was a nasty short ball from his old high-school rival Neil Wagner that found the edge of his bat and claimed his scalp.

That dismissal ended a neat 104-run partnership with Temba Bavuma (52), whose own contribution was not insignificant in South Africa’s recovery to a respectable score, and heralded a collapse that put New Zealand back in the game.

Quinton de Kock (10), undoubtedly the world’s best number-seven batsman, was uncharacteristically cautious and once again the strategy failed as wickets fell without many runs being added. Jeetan Patel dismissed the ‘keeper for the third time in as many matches, which has of course started discussions about whether the spinner might just have the left-handers number.

Elgar, Bavuma and Faf du Plessis managed an extraordinary 256 runs of the 308 runs between them in a scorecard that most of the line-up will not be rushing to frame.

The pitch continued to play better and better and even though Tom Latham’s torrid form continued at the top of the order (his international scores this year read 7, 0, 0, 2, 0, 10), New Zealand found the going good and scored quickly on a surface that played true and offered little or no lateral assistance for the bowlers after Willaimson ordered the heavy roller to smooth it out between innings’.

Williamson batted superbly and at a fair tempo and his opening partner Jeet Patel (52) helped the side to a 102-run second-wicket partnership that swung the balance of power squarely back to the home side. Patel was then caught at midwicket off the bowling of spinner Keeshav Maharaj (2-57) and the double blow of the Taylor injury and Henry Nicholls’ (12) dismissal reduced the score to 165 for three with a batsman retired hurt.

Nicholls looked good before he was the victim of a sensational slip catch by Hashim Amla, also off Maharaj. Kane Williamson was very nearly run out by way of a mix-up with Nicholls but a desperate dive saw the captain make his ground before Philander whipped off the bails. Williamson lay so long on the ground that it appeared that he thought he was probably out but he was in by a frame or so.

Night-watchman Jeetan Patel (9*) survived the necessary 19 balls till the close of play and after striking Maharaj for two imperious-looking boundaries, he will be excited to add to his overnight score.

The weather forecasts have changed and while tomorrow is still expected to be sunny, rain is expected on Sunday. The ground has famously mediocre drainage and with a pitch that is better suited to batting than bowling, one team might have to play very well to force a result.

New Zealand have the edge at the moment but South Africa are a better side and all three outcomes look equally likely with two days of absorbing Test cricket behind us at the Otago University Oval.