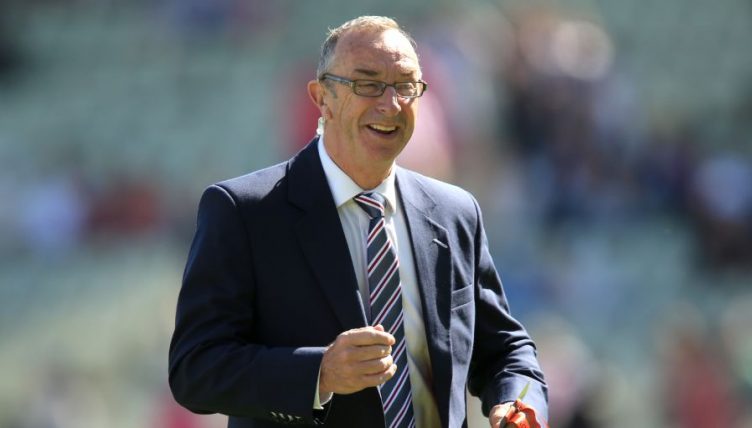 David ‘Bumble’ Lloyd has done everything in the game of cricket, literally.

But there’s one thing within the game that this living legend has yet to turn his immeasurable talents to, and that is answering the fabled Twenty Questions of The Cricket Badger.

From Garry Sobers to being hounded for selfies, and red cards in cricket to powerlifting, these are the 20 questions the Cricket Badger Podcast put to everyone’s favourite cricket personality.

I’d have been a plumber. I got an apprenticeship to be a plumber with the local council and I reckon that’s where I would have been because I was quite interested in it. I think it’s a damn good job. Try and get a plumber!

[James Buttler: Well they get paid a lot]

It’s a good living and you work for yourself. You get your own timetables and holidays too. I think it would be quite nice to be a plumber.

2) Who has been the biggest influence on your career?

My Dad would have been. He was a lovely fella. He was a Methodist Lay Preacher. He never had a drink in his life. He was a very gentle chap and he just let me get on with it. He would take his own little chair and sit and watch and he always just said ‘just be yourself’ and “you’ll make mistakes”, which I have done, so I think my Dad. My mother was an absolute tyrant, she used to hit me with all sorts!

3) What’s been your best moment in cricket?

Well nothing beats playing and so the selfish thing would be to score a double hundred for England, that was quite special. But from a coaching capacity, to watch those players against South Africa in that five-match series. A real tasty South African team at that too and we won that series 2 – 1, that was a real special time for that group of players.

4) What’s been your worst moment in cricket?

I don’t think I’ve really had one because it’s that sort of game where you’re up and down. You’ve got elation and you’ve got despair and you’ve got to deal with it. It’s that same old story –  you’ve got to get back on your bike. In any walk of life and in particular in sport, you’re not bound to win. it’s how you deal with a defeat that will define you. I’ve had some bad moments, but I wouldn’t say that it wouldn’t be part and parcel of a great journey.

5) Who was your cricket hero when you were young?

Garry Sobers. A fantastic player and I still see him from time to time. He still gets his golf ball around over in Barbados. So growing up it would be Garry Sobers and it was a privilege to play against him when he played at Nottinghamshire, and also when he played against Lancashire for the West Indies. He’s a fabulous bloke, a fabulous cricketer and is very matter of fact. In Fact he’ll tell you he never went to bed before 3 o’clock in the morning!

[James Buttler: I’ve heard a few stories about that! I met him a few times in Barbados and he’s a real gentleman isn’t he?]

He was brilliant at what he did and he always enjoyed himself. He always had a smile on his face. He was probably smiling whilst thinking “I’m a lot better than you!”

6) If you could trade lives with any current cricketer for a day, who would you choose to live in the skin of to see what it was like?

Virat Kohli. He’s approaching the best player I’ve ever seen. I’d always say Garry [Sobers], because that’s how it is. My three best batsmen have always been: Garry Sobers, Brian Lara and Vivian Richards – three West Indians. But I watch this bloke Kohli play and I’ve met him a couple of times and he’s a very engaging lad. I think that the way that he’s worked on his game after Jimmy Anderson would do him for a past time is very impressive, he’s come through all that. I think he’s a very rounded cricketer and he can play in any conditions, and then he’s got to deal with that fanatical public. The Indian support is, crikey! There’s nothing else! it’s just cricket, cricket, cricket, and I don’t get it, its just a game. There’s lots of other things that you can occupy yourself with, but if you’re an iconic Indian cricketer, you have to deal with that, so I’d only like it for a day.

[James Buttler; You’d find it hard to nip down to the Indian equivalent of Sainsbury’s wouldn’t you?]

Well I struggle now. If I go down to our shop or down the pub or down the railway station, “Oh come on give us a selfie!” So what it’s like for them lads I don’t know. I get people saying on social media sometimes that it’s a lost generation and nobody knows Ben Stokes or Joe Root, well how come they know me then? I only commentate on it!

7) I’m going to put you in charge of World Cricket for a day, if you could have one thing you could change about cricket, what would you change?

Time wasting. I’d jump on that immediately. The Umpires position should be much stronger too. I’d change that immediately. He’s in charge, not the players, the umpire, as it used to be. Yellow and red cards too. Any misdemeanor, you’re off the field mate, shut up, bat, and bowl.

8) They say all rock stars want to be sportsmen, and vice versa. if you could have been famous in any other field, what would you have chosen to be famous for?

I like my music, I like Johnny Cash, I like Neil Diamond, I’m a massive Rolling Stones fan, Bruce Springsteen, Led Zeppelin, the lot. Prefab Sprout, The Fall, I could go on and on and fill this podcast forever. I’m quite happy with who I am and what I am. I’m not too bothered about being somebody else.

9) If you could meet anybody living or dead, a hero of yours or someone you admire, who would you like to meet?

I’ve mentioned this before on television, I’d like to meet the fella that pinched my lawn mower out of my shed. That’s who I would really like to meet. It was a nice lawn mower and it belonged to me. I’m not bothered about meeting anybody to be honest. I like my mates, I’ve got some great mates who have no interest whatsoever in what I do. They haven’t got a clue what I do! I got one [phone call] last night, ‘You coming for a drink?’ I’m in Bristol! ‘What you doing there?’ I’m working at a cricket match. ‘Oh right ok’. I’m just the ordinary bloke.

Lee Mack. Either him or Count Arthur Strong.

11) What’s the last time you can remember feeling really nervous?

I was nervous yesterday just coming on air at Bristol. I’m nervous every time and it wouldn’t be right if I wasn’t nervous. I think to myself “I’ve got to get this right, got to do it right”, so I am a nervous bloke. Work-wise you want to improve all the time. I’ve got a little boat as well and I’m nervous when I’m parking that because I don’t want to mess up and bump into people, which you do.

12) What is the top item on your bucket list?

To ride a horse. I’ve never ridden a horse. It’s getting a bit late now, I’m 72, but I love going to the racing and I think the jockeys are absolutely incredible. I certainly wouldn’t want to ride a racehorse, but I would definitely want to do it. I’ve got a place up in North Yorkshire, right in the hills, and I want to ride a horse on a Sunday morning, round the lanes, lovely.

13) Are you a morning or a night person?

It takes me ages to get out of bed. I do like my bed. On a non-working day I’ll be in bed at 9pm and I’ll go through until 8am and then you’ve got to prize me out of bed. I’ve just started trying to get up at 7am and me and my wife Diana, we’ve got to really crank ourselves in the morning to get a cup of tea and then sort the dog out. But it really does take us a bit of time to get ready.

14) What celebrity annoys you the most?

I don’t know. I’ve never given it any thought. What celebrity? I don’t know, I don’t know any celebrities. There’s a couple of blokes down the pub that annoy me but there we are.

16) If you could access a time machine, where and when would you go?

I went to a technical school so we didn’t do history. I’ve always been interested in going back into the early 1900’s. It would have been horrendous and  totally unhealthy, with all the smoke and the smog and we didn’t have creature comforts in those days. You could go back to Barney Rubble’s time like with The Flintstones.

[James Buttler: Would you fancy going back to W.G. Grace’s era to find out what cricket was like back in those times?]

[James Buttler: Well that answers that then!]

17) If you could change one thing about yourself, what would you tinker with?

There’d be a load of things. You let yourself down from time to time. I could be a bit more tolerant at home, but I suppose that’s just in your make-up. I wish I could sit down more, I’m always doing something.

18) I spoke to you and [your son] Graham for an interview as part of my book about fathers and sons in cricket. You were telling me about your other sons at the time, one of which was a champion bodybuilder and you were following in his footsteps in the gym. Are you still doing it?

No. I’ve got feet issues, a metal knee and a bad back which isn’t getting any better so it’s cycling now. I’m currently in the process of getting an electric bike which will give me that little extra boost up the hill. They seem to be all the rage but they’re very expensive so I’m having to save up for one of them. But gym-wise, in terms of lifting and powerlifting, I think I’ve finished with that because it just hurts too much.

You’ll have to come back tomorrow, I can’t think of anything… How have you lasted so long maybe?

[James Buttler: How would you answer that?]

20) I missed a question. What do you think you’ll be doing in ten years’ time?

With commentary I know that it’s moving quickly. I’ve got excellent bosses [at Sky] and when the time’s right, I know we’ll sit down and say, “it’s been great, it’s been a blast”. it won’t be too far away, obviously. I certainly don’t want them wheeling me out. If I do last another 10 years, I certainly won’t be doing this, I will not outstay my welcome.