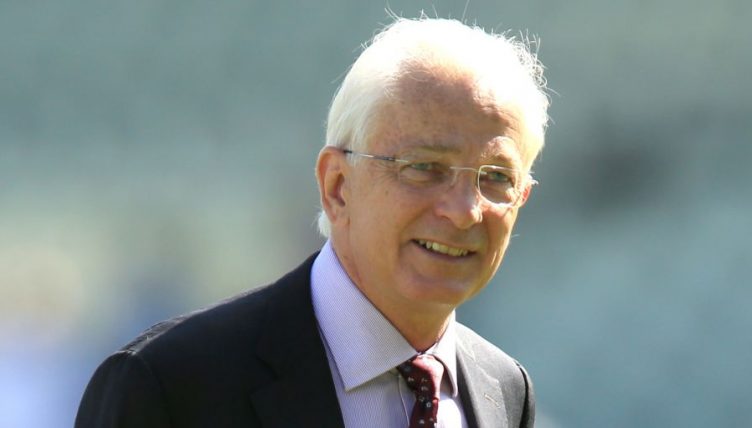 David Ivon Gower OBE has lived a full life by anyone’s stretch of the imagination.

The man affectionately known as ‘Lord’ Gower was the recipient of 117 tests caps for England, a further 114 ODI’s and the veteran of seven Ashes series’, captaining England to victory in 1985.

Gower transitioned from the field to the commentary booth seamlessly and has been a mainstay on Sky Sports’ cricket coverage for over 20 years.

But his story off the field is just as quirky and engaging as anything on it.

From the Ashes to wine, and captaincy to being chased by an elephant, these are the 20 questions the Cricket Badger Podcast put to the man himself.

1)  If not a cricketer, what would you have done with your life?

Wasted it. The only other option I ever had at any stage was based on one year at UCL (University College London), not reading particularly much law. The story I love to tell is that Professor Thomas, who was the Roman Law Professor was also a keen MCC member, and two or three years after I left UCL by mutual consent, I saw him at Lord’s when I was on my way out to bat and I saw him in the Long Room and his words were very succinct. He said: “I think you made the right decision”. I’m not sure what sort of lawyer I would have made, probably a slightly ignorant one based on the lack of reading. It’s one of those things that luckily, I seldom had to ponder it.

2)  What’s been your best moment in cricket?

Holding the Ashes aloft in 1985 which was hands down, both my finest hour and my finest year. Both as a captain winning the Ashes, which is always going to be special, and as a batsman in that team making a lot of runs. It ticked all the boxes: contributing as a player and winning as a captain. The Ashes and the history of the Ashes is still as strong as ever. It was certainly very strong in 1985. Standing there at the Oval, in those years, we were three floors up on a balcony, with Peter West with a BBC microphone, Allan Border alongside and holding up this historic trophy, in its finest four and a half inches. The crowd below, in the days when they were allowed on the ground, but they could hardly see what was going on. To be standing there, under those circumstances, is still a very, very proud moment.

3)  What would be your worst moment in cricket?

Four years later, where with Allan Border again my opposing number, I got the captaincy back for various reasons that I didn’t realise until halfway through the series. If you remember Mike Gatting was the selection committee’s original choice. I got the job back which I was very keen to do, I thought we could repeat the days of 1985. I always enjoyed playing against AB, but I didn’t realise what was going to happen next, and we probably had one of the worst series. Everything that went right in 1985, subsequently went wrong in 1989. Our selection policy wasn’t good, we had a record number of players play through the six test matches and after four Tests we’d already given the Ashes back to Australia. Even my sacking as captain was slightly botched, it was complete mayhem.

5)  I’m going to put you in charge of world cricket for one day. If you could change one thing about cricket, be it domestically or internationally, what would you tinker with?

I would have World Test Cricket Awareness Day. We all know about the current imbalance in world cricket. It’s important to say the least, that we recognise Test cricket for what it is. I think there’s recognition amongst the best, that Test cricket is the best, and I’d love it if they were able to come out and publicly say how much they rate test cricket and acknowledge its importance. Regarding actually doing something about it, the ECB have begun to throw out the idea of four-day Tests and other countries appear to be receptive to that. I grant you that a lot of five-day games don’t go the distance, but the ones that do, it can be hard to explain to a lot of the world, especially the Americans, what the excitement is to spend 30 hours getting down to a nail-biting finish only for it to end in a nine-wickets-down draw. There are dull Tests, but equally there are dull ODIs. It’s not as if any format of the game guarantees you close games, just the likelihood of a dull game decreases with the shorter the format is. The World Test Championship would give relevance and context, two important things that people are seeking to increase interest.

6)  If you could meet anyone living or dead, who would you like to meet?

I never know the answer to questions like that, so… Gandhi.

7)  If you won the lottery what would be the first thing that you’d spend your money on?

I’d clear all debts and move to a country which doesn’t have the M25.

8)  Who would play you in a movie about your life?

Who’s the blond guy, Wilson, what’s the name? Trying to think of an American actor, it’s not going to work, I can’t remember his name. [James Buttler: Were you thinking of Will Ferrell?] No, no, god no, he’s far too funny for me and tall. It’s Owen Wilson!

9)  What is your first memory of being really excited?

[chuckles] Surely not! Can we do that sort of thing? I’ll tell you what. As my family left what was then Tanganyika, now Tanzania, we did tours of the game parks, and in the Ngorongoro crater, we parked the land rover 20 yards away from the first rhino I’d ever seen. It looked quite frightening for a five-year-old boy, this massive great wonderful beast, looked rather imposing and frightening. I also remember being chased by an elephant that same day and the driver of the land rover stalled the car, that was even more exciting as it was a true heart-stopping moment.

10)  What’s the first thing you bought with your own money?

A record, I can’t remember what it was, it might have been In The Year 2525. The first thing you bought in those days were 45 RPM singles.

11)  What’s the last time you can remember feeling really nervous?

Getting up this morning! There are lots of things. I think nerves are a good thing. Getting back to cricket, you need the edge that nerves give you. There is that sort of balance between nerves that give you the performance and the satisfaction at the end.

Crikey! The top one of my bucket list, is after a life in cricket where I’ve happily and luckily done a lot of travel to the cricketing world, I’ve left a lot of Europe undone. For instance, there are some of the great cities of Europe, including Rome at the top of the list, Vienna, Prague, Budapest, lots of places I’ve yet to go.

14)  What celebrity annoys you the most?

Oh good God, I don’t admit to stuff like that.

Well I don’t have the Fonz’s scripts, that’s for sure. I’d like to put myself at about, on a good day, a 6.

16)  If your plane was about to crash, who would you want sitting next to you?

I’d like to be sitting next door to the pilot actually: ‘Any chance we could do something about this?’

17)  If you had access to a time machine, where and when would you like to go to?

I would have to go back as far as (again a very good question), how about something like the Battle of Trafalgar. I like history, and I do like major events in our history. I like heroism and a good story and [Horatio] Nelson was a great story. To be thrown into something real like the thick of a battle would be the true test of a person’s character and nerve.

19)  If you could live anywhere in the world, where would it be?

20) If you could change one thing about yourself, what would it be?

Unfortunately, I have a few. Sometimes the short temper appears too regularly, I’d try and remove that. Most of the time I think I’m quite equable, but when it pings, it pings. For instance, those that knew me in my days as captain were able to detect that and ride with it, but sometimes that lingers a bit longer nowadays.