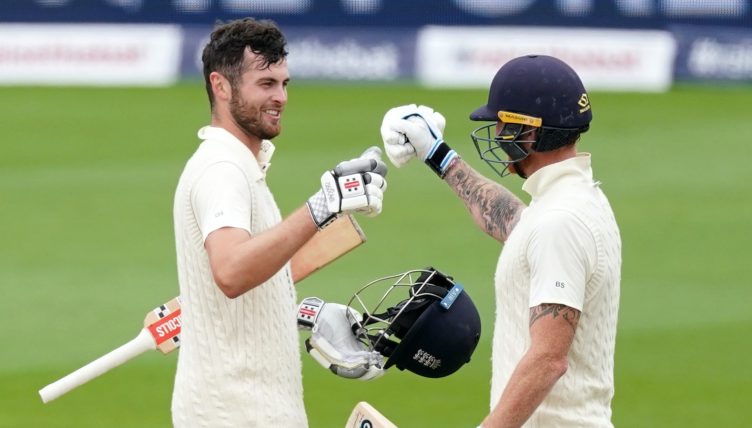 Ben Stokes and Dom Sibley celebrated hard-won centuries as their stand of 260 allowed England to pile scoreboard pressure on the West Indies in the second Test at Emirates Old Trafford.

Not for the first time Stokes was the headline act as he cracked 176 on day two – a 10th Test hundred and his second highest – while Sibley completed a nine-hour epic to finish with 120.

Their combined effort did the bulk of the work in a final total of 469 for nine declared, England’s highest score in the opening innings of a home Test in three years.

The West Indies were 32 for one at the close, Sam Curran taking John Campbell out lbw late on.

Sibley and Stokes had come together on the first afternoon when Joe Root’s departure left his side wobbling on 81 for three and were not parted for another 95 overs having changed the landscape of the match.

Stokes underlined his growing claim to be the country’s most complete batsman with a brilliantly paced innings containing 17 fours, two sixes and several different gears, while Sibley is surely the most patient.

His unashamedly attritional knock saw him reach his second ton in a mammoth 312 balls, nine more than the famously obdurate Sir Geoffrey Boycott ever took and just three less than Michael Atherton’s slowest England hundred on home soil in the 21st century.

The fourth-wicket pair resumed on their overnight score of 207 and immediately tapped into their previous blueprint, putting on a modest 57 runs against some wildly varied bowling in the morning session.

Sibley was responsible for just 15 of those in two hours, but that was enough to convert his day-one score into a first century at home. The landmark moment came after 36 balls in the 90s and just before lunch, a punch past mid-on skipping away for three.

Stokes was less aggressive than usual but still considerably brisker than his partner, scoring 40 to reach the break on exactly 99. The 40-minute wait did nothing to trouble the all-rounder, who needed just three balls after the restart to join Sibley.

He brought up his celebrations with a well-timed reverse-sweep to the third-man boundary and quickly gave notice that business would be picking up.

Having taken 119 balls over his first fifty runs and 136 over his next fifty, Stokes flipped a switch and moved from 100 to 150 in just 46 deliveries. After denying himself for long periods, the wider repertoire enjoyed an overdue outing.

The pick of the shots was an exquisitely timed six over midwicket off Alzarri Joseph, pinging off the middle of the bat with minimal back lift and taking off.

Joseph left the field with tricep pain thereafter, the second of the seam attack to require treatment after Shannon Gabriel in what was fast becoming a long and draining stint.

Jason Holder leant on DRS in an attempt to make something happen, unsuccessfully referring lbws against Sibley on 105 and 109 then Stokes on 119.

In the end it took a conscious decision from Sibley to break the long wicket drought, an uncharacteristic heave off Roston Chase soaring high and straight to Kemar Roach in the deep.

After 556 minutes his stay was over and his work was done. It was Stokes who was best placed to cash in and the Windies let him slip through their fingers twice.

Jermaine Blackwood allowed a thick edge to burst through his hands at slip with Stokes on 141, with the unfortunate Gabriel paying the price seconds later when a sumptuous on-drive raced for four.

On 157 Gabriel created another chance, Stokes rocking back and steering to gully, where Shai Hope fumbled after diving well.

Ollie Pope missed out, lbw deep in his crease to Chase, before Stokes fell at the third time time of asking. Hunting down his second double century in Tests he felt confident enough to reverse his bat against Kemar Roach but brushed a catch behind.

Chris Woakes nicked to third slip for a golden duck as Roach ended a long barren run dating back three Tests with two in two balls, but the lower order still put on another 74.

Jos Buttler made 40 of them, showing glimpses of his stroke-making ability before holing out, while Dom Bess chipped in with 31 not out.

Chase completed figures of five for 172 having churned out 44 overs.

Root’s declaration left an hour to play with and it was Curran who landed a blow, coming on first change and getting Campbell leg before for 12.