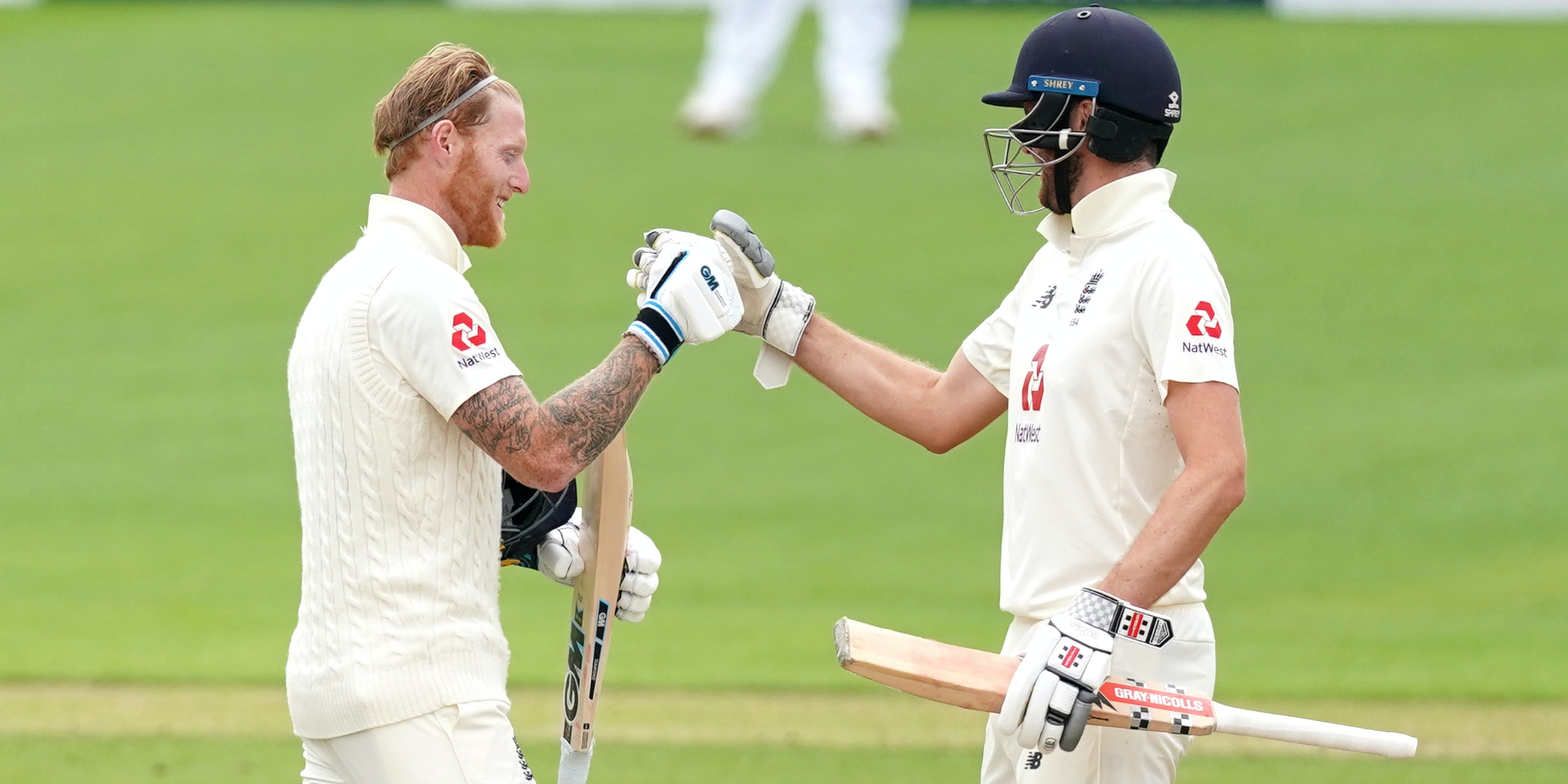 Ben Stokes and Dom Sibley both celebrated hard-won centuries on day two of England’s second Test against the West Indies as the hosts reached 378 for five at tea.

The pair came together at 81 for three on the first afternoon and were not parted until the scoreboard read 341, a long and watchful stand that dug their side a deep foothold in the game.

Sibley made a painstaking 120, soaking up 312 deliveries for his second Test ton and lasting more than nine hours, while Stokes accelerated sharply to 172 not out after reaching three figures for the 10th time.

The fourth-wicket pair resumed on their overnight score of 207 and immediately tapped into their previous blueprint, putting on a gentle 57 runs in the morning session.

Of those Sibley scored just 15 in two hours, but that was enough to take him to a first home century. The landmark moment came after 36 balls in the 90s and just before the interval, a punch past mid-on skipping away for three. It was the slowest Test century on English shores in the last 20 years, albeit by just three balls, and even outlasted the lengthiest hundred by the famously obdurate Sir Geoffrey Boycott.

Stokes was less overtly aggressive than usual but also considerably brisker than his partner, scoring 40 before lunch to take the break on exactly 99. The 40-minute wait did nothing to discomfit the all-rounder, who needed just three balls after the restart to join Sibley.

He brought up his celebrations with a well-timed reverse-sweep to the third man boundary and quickly gave notice that business would be picking up. Having taken 119 balls over his first fifty runs and 136 over his next fifty, Stokes flipped a switch and moved from 100 to 150 in just 46 deliveries.

The pick of the shots was an exquisitely timed six over midwicket off Alzarri Joseph, pinging off the middle of the bat with minimal back lift and taking off. Joseph left the field with tricep pain thereafter, the second of the seam attack to require treatment after Shannon Gabriel in what was becoming a long and draining spell in the field.

Jason Holder leant on DRS in an attempt to make something happen, referring lbws against Sibley on 105 and 109 and Stokes on 119, all close but all in vain. In the end it took a conscious decision from Sibley to break the long wicket drought, an uncharacteristic heave off Chase soaring high and straight to Kemar Roach in the deep.

After 556 minutes his stay was over. The West Indies would have been glad to see the back of him but knew Stokes was the man who could inflict the most damage.

All the more frustrating for them to let him slip through their fingers twice before tea, then. Jermaine Blackwood allowed a thick edge to burst through his hands at slip with Stokes on 141, with the unfortunate Gabriel paying the price seconds later when a sumptuous on-drive raced for four.

On 157 Gabriel created another chance, Stokes rocking back steering to gully where Shai Hope dived well before fumbling.

Ollie Pope did not linger long, becoming Chase’s fourth victim of the innings when he was lbw for seven, bound to the crease and plumb in front.