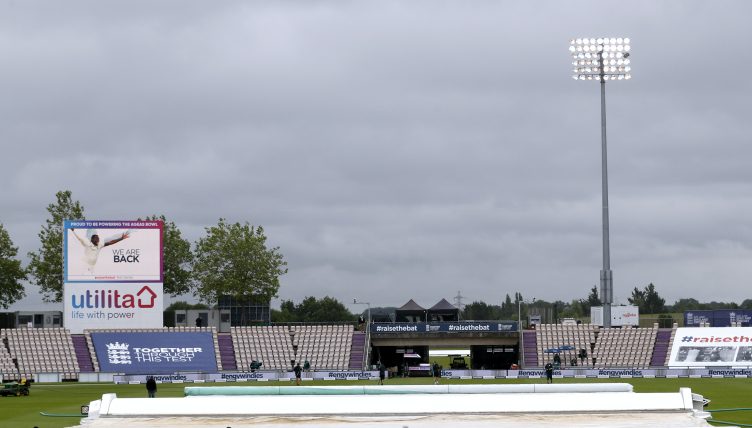 The long-awaited return of international cricket was delayed by rain as the opening session of England’s first #raisethebat Test against the West Indies was washed out inside the bio-secure bubble at the Ageas Bowl.

The last Test between New Zealand and India concluded on March 2, six days before the conclusion of the Women’s T20 World Cup, while England wrapped up their previous competitive outing in Johannesburg on January 27.

But fans were watching and listening at home were forced to wait as persistent drizzle in Southampton delayed the scheduled 10.30am toss and then led to umpires Richard Kettlebrough and Richard Illingworth deciding there would be an early lunch at 12.30pm.

That delayed Ben Stokes’ first act as England’s 81st Test captain, which would have been to hand in a team-sheet and confirm the anticipated axing of Stuart Broad.

The 34-year-old is the country’s second highest wicket-taker of all time and has not missed a home Test since a dead rubber in 2012, but was expected to be edged out here by record holder James Anderson, Jofra Archer and Mark Wood.

England’s absent Test captain Joe Root was watching from home, with the latest addition to his family.

Root stepped out of the ‘bio-secure’ environment due to the impending birth of his and wife Carrie’s second child and confirmed their new arrival in an Instagram post.

Alongside a picture that showed him holding the new baby and sitting with son Alfie, Root wrote: “Good luck boys @englandcricket We will be watching and supporting you all the way! #cricketisback”

The three-match contest between these sides has been named the #raisethebat Series in honour of key workers all over the country who have helped tackle the coronavirus pandemic, with England players wearing individual names on the backs of their training shirts.

The boundary boards on the perimeter of the pitch also carried the name of Sir Everton Weekes, the great Bajan batsman who died at the age of 95 last week.