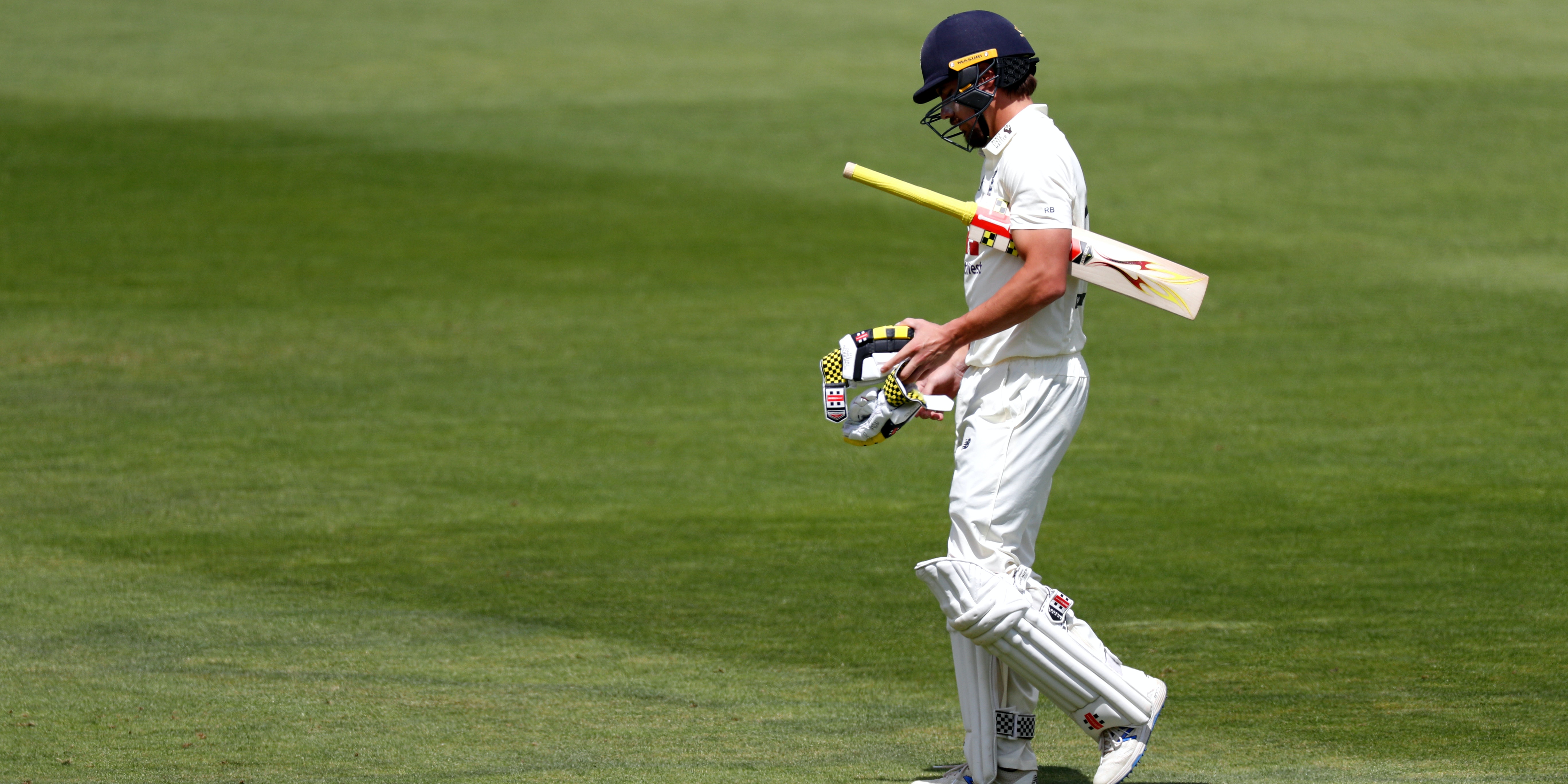 England were sitting on a fragile lead after the fourth afternoon at the Ageas Bowl, as the West Indies worked hard to stay on top in the first #raisethebat Test.

The hosts were 168 for three at tea, 54 in front, with all three batsmen complicit in their own downfalls on a day of attritional scoring.

Off-spinner Roston Chase, who took a career-best eight-wicket haul against England in Barbados last year bowled with consistent accuracy but was flattered by the wickets of Rory Burns for 42 and Joe Denly for 29.

The former slashed straight to point just before lunch after an otherwise composed knock, while the latter flicked tamely to short midwicket for another unpersuasive contribution.

In between, Dom Sibley departed for a hard-working 50, caught down the leg-side seconds after chopping a Shannon Gabriel no-ball into his stumps.

Zak Crawley was 38 not out at the break, while captain Ben Stokes had yet to score.

Burns and Sibley’s reunion after six months apart due to the Surrey man’s ankle injury had lasted just 10 balls on day one but their second attempt was considerably more successful.

Having worked through 10 difficult overs on the third evening they resumed still 99 runs adrift and batted steadily for the majority of the morning session as they ground out a 72-run partnership.

Both men got up and running with boundaries in the sixth over of the morning, Burns driving Shannon Gabriel square for four and Sibley working him through mid-wicket.

The West Indies attack was short of its best in the opening hour, with Sibley secure and Burns timing the ball nicely.

The pitch was beginning to offer some assistance, though, Jason Holder getting one to keep worryingly low to Burns before another ball leapt from a length at Sibley and drew blood from the right-hander’s elbow.

Things tightened up considerably in the second half of the session, Chase with a tight spell of off-spin backed up by Holder and Alzarri Joseph at the Pavilion End.

After just 11 runs in 13 overs, Burns’ patience snapped and he went after Chase outside off stump. He got underneath the ball but punched directly to John Campbell behind square. The Surrey opener hung his head as the tourists celebrated, a soft end to a composed stay.

Sibley pressed on with Denly at his side, eventually reaching his fifty from 161 deliveries. Having made up for his first-innings duck, he then prodded tamely at his very next ball, diverting Gabriel into his stumps. The celebrations were soon hushed as third umpire Michael Gough called a very tight no-ball.

Gabriel was visibly furious but reluctantly returned to his mark to renew hostilities. It took him just two balls to take out his frustrations in the perfect manner, having Sibley caught down the leg side in what is becoming a familiar issue.

At 113 for two England were just one one run away from parity and Denly began building the lead when he finally nailed a pull after a couple of mis-timed attempts.

Denly and Crawley, effectively eyeing one place when Joe Root returns as captain next week, added 38 before another lapse.

Denly was the man to go, turning Chase softly to Holder to complete a long run of middling scores that keep his average sitting worryingly under 30.

That brought Stokes to the crease and he survived an badly-judged review for caught behind as Kraigg Brathwaite sent down the final over before tea.