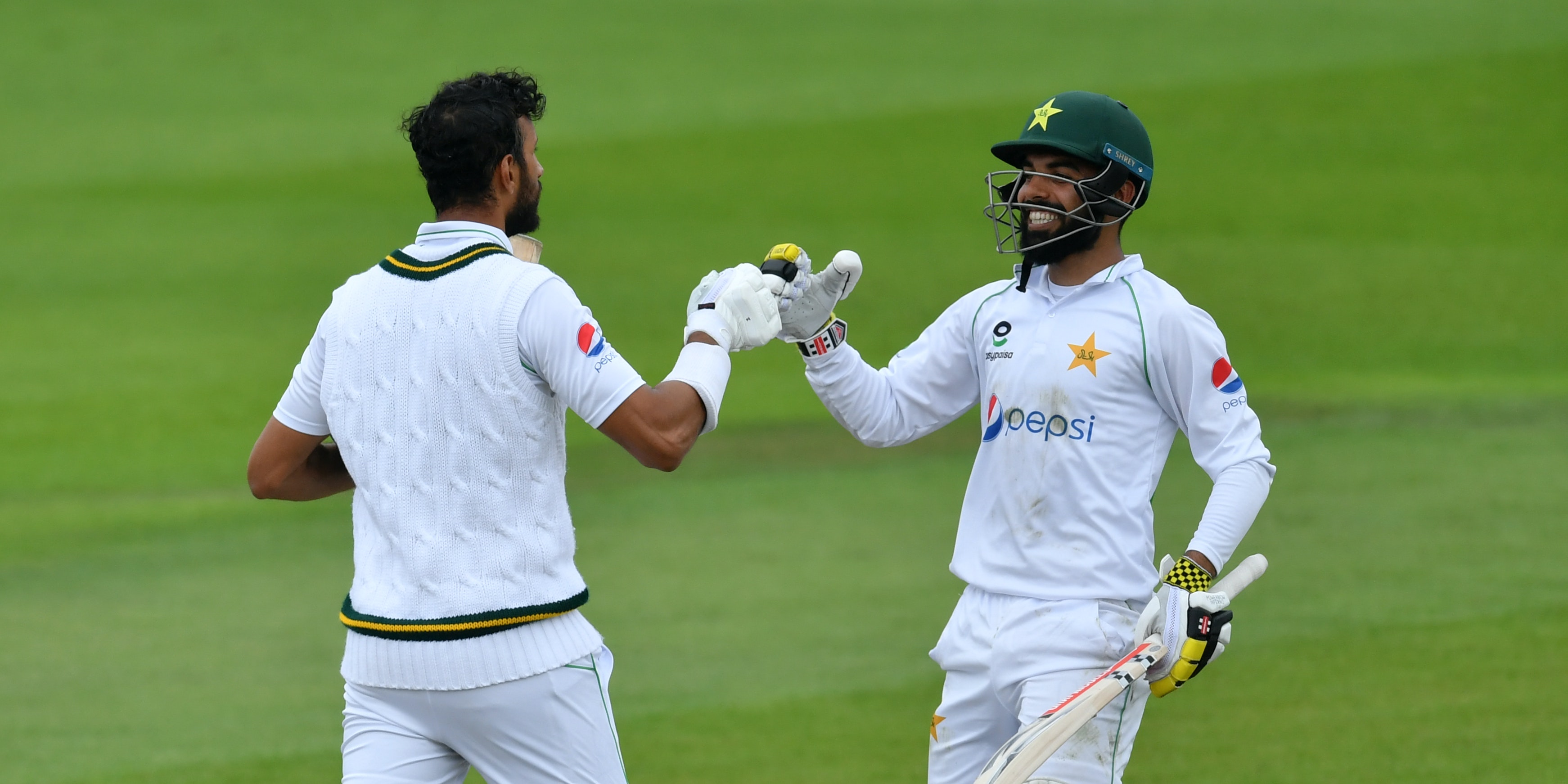 England’s top order was put to the sword as Pakistan’s vibrant attack followed up Shan Masood’s 156 with a stirring display on day two of the first Test.

Masood spent almost eight hours at the crease as his career-best knock lifted the tourists to 326 and the bowlers made good use of the platform to leave England 92 for four at Emirates Old Trafford.

Openers Rory Burns and Dom Sibley were then taken care of inside four overs as Shaheen Afridi and Mohammad Abbas dovetailed perfectly with the new ball. The latter struck a killer blow when he cleaned up Ben Stokes for a duck and by the time Joe Root was undone by Yasir Shah’s leg-spin, his side were staring down the barrel.

But Ollie Pope performed with skill and heart to make a punchy 46 not out before the close and will continue his fightback on the third morning.

The thrilling late action – and that is the only way to describe the boisterous, buzzing brilliance that Pakistan brought in the field – owed much to Masood’s hard work in the first innings.

The opener battled with England for more than 107 overs, facing 319 deliveries as he made his third Test hundred in a row, a streak dating back to December and including tons in Karachi and Rawalpindi. Jos Buttler, who missed a catch and a stumping when he had just 45 to his name on day one, will need no reminder of the debt he now owes when he resumes on 15no alongside Pope.

Play started with Pakistan 139 for two, built in large part around Babar Azam’s fluent 69. He was unable to add to that here, flashing at James Anderson in the first over of the day.

That was the first blow in a meticulous, methodical morning session that saw England pick off three wickets for the addition of just 48 runs. Anderson and Stuart Broad’s initial 11-over spell cost just 11 runs and brought a second breakthrough when Asad Shafiq pushed the latter to second slip.

Chris Woakes added Mohammad Rizwan with a neat away-swinger to make it 187 for five at lunch but the continued presence of Masood, who had moved from 55 to 77, was a crucial factor. He flourished in the afternoon, upgrading a hard-working innings into something of a class above.

Shadab Khan contributed a busy 45, but England made themselves a soft target by serving up five overs of soft spin at a cost of 27 risk-free runs.

The return of Anderson and Broad barely improved matters, with the pair milked for 42 in eight overs with the new ball. Masood brought up his hundred from 251 balls, leaping with joy as his team-mates packed the players’ balcony.

A wild hack from Shadab against Dom Bess ended a 105-run stand, opening the door for Broad and Archer to take two apiece as Pakistan’s last four fell for 35. Masood clubbed a pair of sixes before he was ninth man down, lbw to Broad.

After almost 110 overs in the field, and with a more than handy total on the board, England now had to strap in for one of the most exciting attacks in world cricket. Whatever plan was hatched in the safety of the dressing room was scattered to the wind in little more than 20 minutes.

Shaheen needed just four deliveries to open his account on English soil, racing through the crease from over the wicket and straightening one to Burns as he looked to work the ball off his pads.

It took DRS to remove the suspicion of an inside edge and the 20-year-old celebrated theatrically as 10 other players hollered their approval. The technology came to England’s aid moments later, Root given out for nought after being beaten by swing but correctly judging the bounce to be high.

Shaheen was only one part of the equation, though, and Abbas proved just as deadly. The wily seamer, recently of Leicestershire, dipped into his bag of tricks and found a seaming delivery that was pinned Sibley in front for eight.

That brought Stokes to the arena and Abbas conjured something fitting of his illustrious opponent. Batting outside his crease and advancing, Stokes was foxed on the outside edge and paid with his off stump, bowled for a duck and briefly stunned at his own fate.

Pakistan raised the roof again in response, with England in terrible trouble at 12 for three. Root and Pope shut out the noise to put on 50 together, the younger man doing the majority of the scoring including one textbook on-drive off teenage quick Naseem Shah.

Yasir started slowly but turned one just enough to snare Root’s outside edge for 14, an ambitious cut safely pouched by Rizwan. Pope was playing a different game to his colleagues, finding six boundaries as he settled well to the task, and his side need plenty more of the same to reclaim their footing.