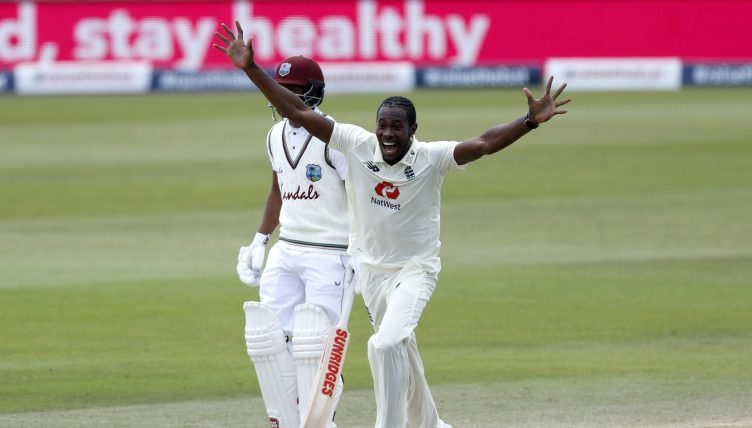 Jofra Archer seized the initiative for England as the home side reduced the West Indies to 35 for three chasing 200 on the final morning of the first Test.

England added a useful 29 to their overnight score of 284 for eight to reaching the psychological landmark – Archer with a couple of brilliant strikes before he was last man out for 23.

But his main job is to wreak havoc with the ball and he did just that during a superb five-over spell from the Pavilion End that saw him claim two wickets and send opener John Campbell back to retire hurt.

James Anderson kicked off the chase with a solid maiden over but it was Archer’s first ball which brought an unexpected breakthrough of sorts.

Fast, full and swinging towards leg stump, it thumped into the top of Campbell’s boot and initially led to nothing more dramatic than a pair of leg-byes.

It soon became apparent it had left some damage, though, and a clearly pained Campbell hobbled off to ice the injury at the end of the fourth over.

Archer followed up with something even more tangible in his third visit, swinging the ball in towards off stump and coaxing a limp defensive shot from Kraigg Brathwaite.

The movement did for the right-hander, clattering the stumps via the inside edge. Brathwaite had been described by head coach Phil Simmons as “the glue” of the tourists’ batting line-up but here he had come unstuck for just four.

Shamarh Brooks proved even simpler prey for the 25-year-old, trapped on the crease and deceived through the air for a five-ball duck. Archer was tearing into his celebrations before the lbw was even confirmed.

Mark Wood was given the task of picking up the baton with the score at 26 for two and he did not the quality dip for a moment. His fourth delivery moved in off the pitch at good pace, took a deflection off Shai Hope’s thigh pad and flattened off stump.

Two exploratory overs of spin from Dom Bess brought one close lbw shout against Roston Chase but he and Jermaine Blackwood walked off for lunch with 165 still required.