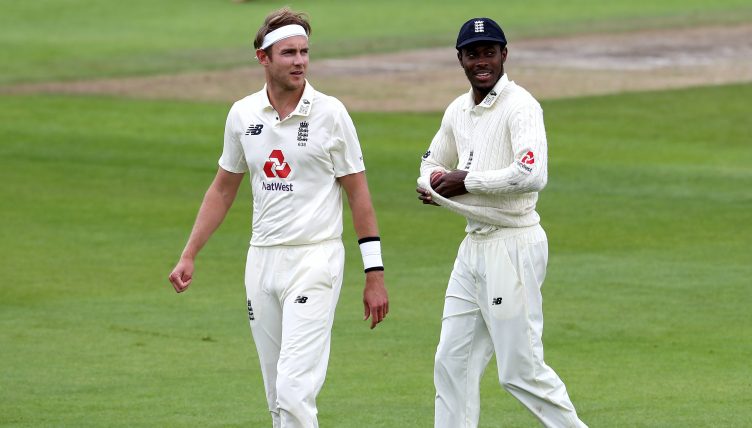 Stuart Broad will resume his hunt for a 500th Test wicket as England hope to defy a poor weather forecast and wrap up a series victory over the West Indies.

England established a position of outright dominance on day three at Emirates Old Trafford, setting the tourists a distant target of 399 and then reducing them to 10 for two in the evening.

Broad was responsible for both breakthroughs, having earlier finished off their first innings with a burst of four for 14 to leave himself tantalisingly poised on 499 career scalps.

Only six other players in history have ever reached the imminent milestone, with long-term partner James Anderson one of just three seamers to do so along with Glenn McGrath and Courtney Walsh.

Broad may yet have to wait for his chance to join that exalted company – with some predictions of Monday’s play being a washout – but after picking up eight for 39 in the match so far, he might not need long.

Rory Burns has already played a strong role with the bat, scoring 57 in the first innings and ushering in a declaration with 90 in the second, and is now aiming to do his bit in the field for Broad.

“I’ll be standing at gully and hopefully I’m going to catch it if he gets a nick,” Burns said.

“It’s a nice place to be when his tail is up and he’s bowling like this. It’s a pretty ridiculous achievement to get to 500. Hopefully we can keep grabbing them for him. You feel every ball is going to come to you. We’ll be standing there waiting to catch it.”

Burns and Dom Sibley had earlier put on 114 for the first wicket – the first century stand by English openers on home soil since Sir Alastair Cook and Alex Hales in 2016.

The pair appear to have made the troublesome top-order slots their own and are arguably the most settled pairing since Cook and another knight, Sir Andrew Strauss, last played together.

“Me and Sibbers have a good relationship away from cricket, we know each other really well from our time together at Surrey,” he added.

“This is another step up but it’s about helping each other where you can. He has adapted really well to Test cricket, which is pleasing, and for us to push on as a partnership and get stats like that is really good.”

West Indies head coach Phil Simmons knows his side face an uphill task to save the game and retain the Wisden Trophy and has called on his remaining batsmen to stand up and be counted.

“We haven’t had any centuries in the series so I’m always going to be putting pressure on them to get one,” he said.

“The wicket still looks good, there are two days left to bat and someone needs to get themselves a big hundred. There is plenty of time in the game so we need to be more determined to get big scores.”