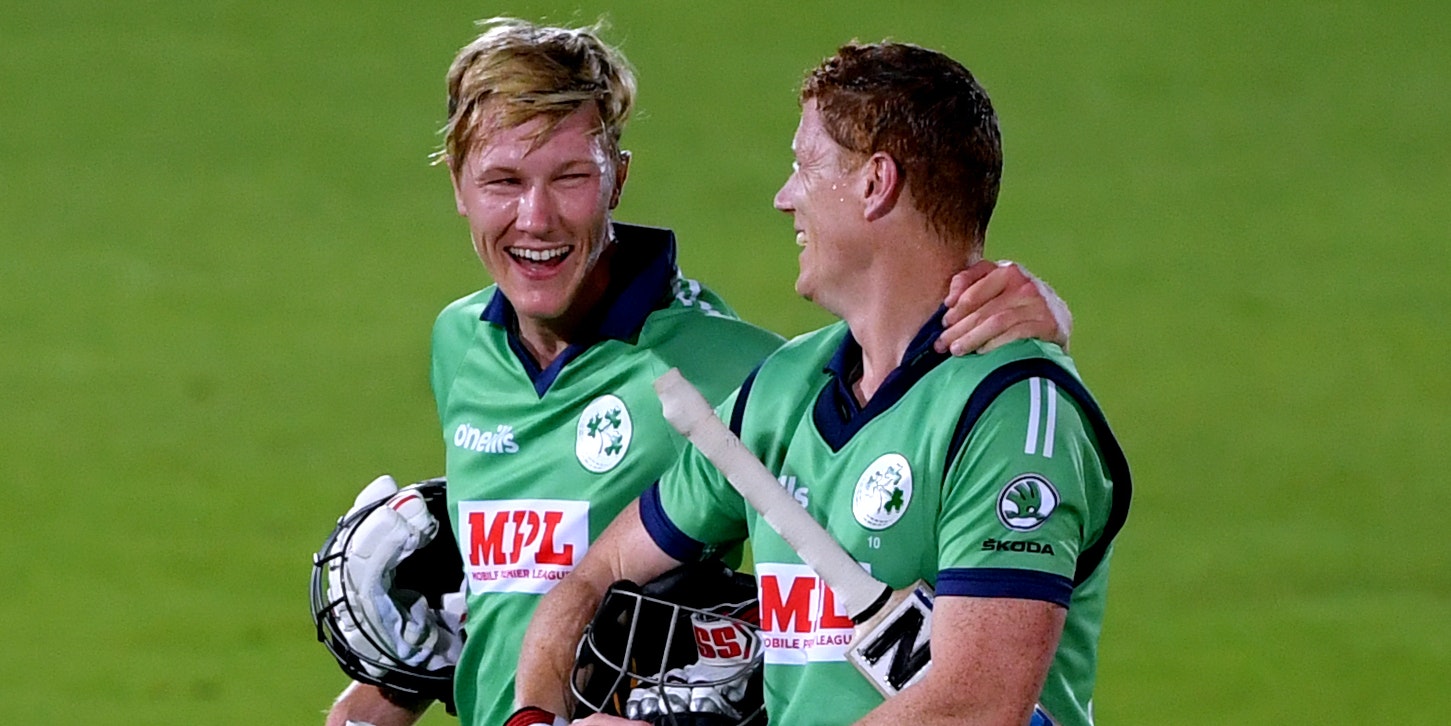 Paul Stirling and Andrew Balbirnie starred as 329 once again proved to be the magic number for Ireland, who claimed only a second win over England in their history after overcoming the world champions in a final over thriller.

Set an identical score to the one they finished on to famously beat England at the 2011 World Cup, a 214-run stand between Stirling and captain Balbirnie laid the foundations in the final match of the Royal London series.

Stirling was run out for 142 while Balbirnie holed out for 113 with 50 still required from 33 deliveries, but Kevin O’Brien – the hero of Bangalore – fittingly got them over the line from the penultimate ball with seven wickets to spare under lights.

After being asked to bat first, England had stuttered to 44 for three but Eoin Morgan’s fantastic 106 from 84 balls was the cornerstone of 328 all out in 49.5 overs, the captain sharing a 146-run stand with Tom Banton.

Morgan, though, felt tightness in his groin and was restricted to a watching brief as Stirling and Balbirnie quietened the criticism of Ireland’s top-order following their under-performance in the first two one-dayers.

England run out 2-1 series winners but Ireland – by first restricting their opponents, with Craig Young taking three for 53, and then holding their nerve with the bat – have their first ODI win on these shores.

Young accounted for Jason Roy for a third successive innings and then James Vince via the outside and inside edges, while in-between Jonny Bairstow missed a heave off the returning Mark Adair and was bowled by a nip-backer.

Morgan, back at his more customary position of four for the first time in the series, punished over-pitched deliveries with some sumptuous straight drives and while he was struck flush on the helmet early on, it was a rare misstep underneath the short ball as he pulled authoritatively thereafter.

There were three monstrous sixes off Josh Little in amongst being dropped on 67 by a diving Balbirnie at midwicket off Andy McBrine, who was taken the distance by Banton as the 21-year-old stepped out of his more senior partner’s shadow with some lusty blows.

After he moved to a 41-ball fifty, his first at international level, Morgan brought up three figures off 78 balls with his 14th four. He would add one more to go along with his four sixes before skewing Little to backward point, the start England lurching from 190 for three to 216 for seven.

Banton was trapped plumb lbw for 58 by the part-time leg-spin of Gareth Delany, while the out-of-sorts Moeen Ali and in-form Sam Billings were both caught in the ring after leading edges off Curtis Campher and Young.

David Willey ensured the wheels did not fall off and was the aggressor in a 73-run stand alongside Tom Curran, with Adair and McBrine, twice, bludgeoned for leg-side sixes en route to a 38-ball fifty before he holed out for 51. Curran (38) then assumed responsibility for getting England well past 300.

But on an easy-paced pitch, England, led by Moeen due to Morgan’s injury, were by no means out of sight and that was underlined when Stirling smeared back-to-back sixes over deep square-leg off Saqib Mahmood.

Even though Willey made the breakthrough by bowling Delany round his legs, there was no subduing Stirling, who used the slog-sweep to take three sixes off Rashid after passing fifty. Balbirnie was an ideal foil, eschewing any risk but still going along at more than a run-a-ball to play his part in a union that stretched beyond three figures.

England were willing and regularly shuffled their bowlers but they lacked a cutting edge in the middle overs. Their cause was not helped when Vince put down a sharp chance at midwicket with Stirling on 95, after which the batsman brought up a 96-ball ton as twilight set in.

Balbirnie went to a run-a-ball century, with 12 fours, and at that point it seemed England would be handily beaten but the run-rate was stifled and once the pair were out, the nerves set in.

But Harry Tector (29no) and O’Brien (21no) managed to get the target down to eight from the final over, and the latter saw them home with a single down to fine-leg off Mahmood.