Home UK Jermaine Blackwood: Once I’m at the crease bowlers are under pressure, not me

Jermaine Blackwood: Once I’m at the crease bowlers are under pressure, not me 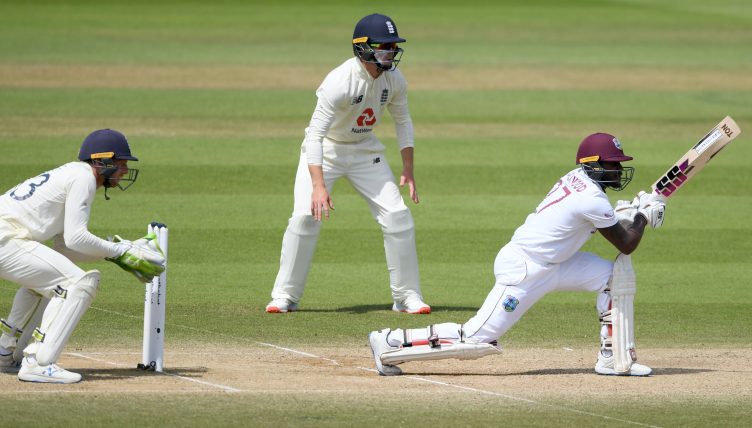 Jermaine Blackwood claimed he ignored the barbs of England stand-in captain Ben Stokes in order to carry the West Indies to victory in the first Test at the Ageas Bowl last weekend.

Blackwood’s impetuousness at the crease has led to a stop-start international career and although he was recalled after some encouraging domestic displays, a rash shot in the first innings proved old habits die hard.

However, after arriving to the crease with the tourists on 27 for three, with John Campbell retired hurt and chasing 200 for victory, Blackwood was much more resolute and his 95 was the catalyst for a four-wicket triumph.

Concentrating on the task at hand was intensified by England and, according to Blackwood, Stokes attempting to entice the Jamaican into another risky stroke but any remarks were disregarded.

Blackwood said: “I went out there and from the first ball Ben Stokes, the captain, was in my ear. I wasn’t really paying too much attention to that, I was keen on getting the runs and getting my team across the line.

“That didn’t faze me at any point in time – once I’m there, you’re going to be under pressure because you know you can’t bowl a loose ball to me. Once I’m at the crease, they’re the ones under pressure, not me.

“I just like to be in the moment. Pressure doesn’t move me too much. Once I get myself in I get into my zone and once I’m in there it’s hard to come out of. I don’t pay attention to (criticism), I always have fire inside of me.”

Asked for specifics about what Stokes might have said, Blackwood responded: “I can’t really remember but it was nothing bad. That’s cricket, you’ll always hear a bit of talking – that’s how it should be played, in my view.”

While Blackwood eventually was dismissed looking for a big shot which would have moved him closer to just his second Test century, his innings was enough as the Windies drew first blood in the #raisethebat series opener.

Windies coach Phil Simmons, who expects Campbell to be fit to feature in the second Test at Emirates Old Trafford this week, admitted he cannot fault England’s logic as they attempted to induce a false stroke from Blackwood.

Simmons said: “I didn’t realise they were doing that, it’s what I would have done, too, and tried to get him irrational.

“But he held his own and played the situation as well as he could have done. That shows that his mindset is improving and that is all you can ask.”

Having the backing of Simmons as well as captain Jason Holder is important for Blackwood.

He added: “What’s pleasing for me is before I went to bat the coach and captain told me to play my natural game. That was the most pleasing thing, having their full support.

“Once I’ve gone over 100 balls I know I will score runs. That’s my plan going forward.”