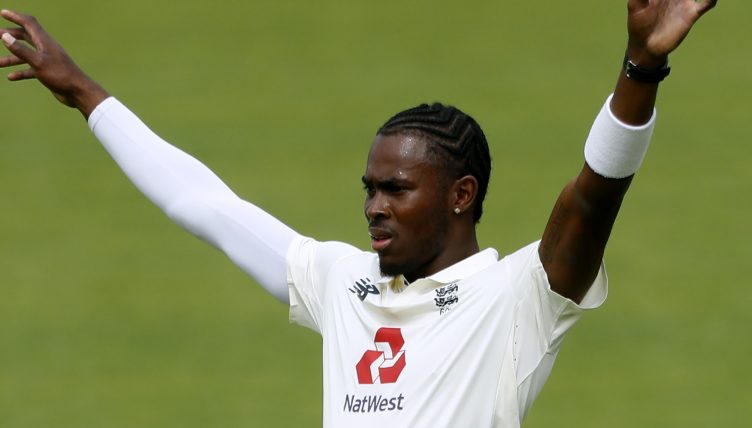 Jofra Archer has backed Ollie Pope and Jos Buttler to bring England back into the first Test against Pakistan after a difficult second day left them up against it at Emirates Old Trafford.

England saw opener Shan Masood rack up a career-best 156 as he carried the tourists to 326 all out, then lost their entire top four in less than 20 overs.

Things were looking decidedly dicey at that point, with Ben Stokes in the pavilion for a duck and captain Joe Root gone for 14, but Ollie Pope made 46 not out before the close to begin the fightback and take the score to 92 for four.

He will resume on the third morning alongside Jos Buttler, who owes the side an innings after missing a catch and a stumping when Masood had just 45 to his name.

Archer, who joined Stuart Broad in taking three Pakistan wickets, has not given up on the pair pulling things around.

“I wont say they can dig us out of a hole because I don’t think we’re in a hole at the moment, but I think they can put on a really big partnership and help swing the momentum of the game in our favour,” he said.

“We just need to get as close to, or past, their total. Obviously the wicket is getting easier to bat on and I have no doubt that the two not-out guys can go on and score big.”

If they do go on to deliver on Archer’s prediction it will be no small success given the quality and variety of Azhar Ali’s attack.

Shaheen Afridi did for Rory Burns with pacy left-arm swing, Mohammad Abbas castled Ben Stokes for a duck and pinned Dom Sibley with his unforgiving seamers, and Yasir Shah found Joe Root’s outside edge with a leg-break.

The only bowler not to take a wicket, Naseem Shah, cranked it up past 90mph by way of warning, but Archer raised an eyebrow about the 17-year-old’s prospects of keeping his speeds up.

Archer, who has yet to recreate his own lightning fast spells of 2019 in recent weeks, told Sky Sports: “It’s not every day you’re going to come in and 90mph.

“I’ve seen Shah started bowling 90mph, so we’ll see how he goes on. No-one is a robot so I’ll be very, very interested to see what he can produce a bit later.

“This wicket is not a wicket you’re really going to try to bend your back on.”

Archer was speaking for the first time since his unauthorised breach of the bio-secure bubble saw him spend the second Test against the West Indies in isolation, but he made it clear he is already past that transgression.

“I’m fine, I’m back playing cricket again. Whatever happened last series is gone and I’m just glad that at the start of this series I got three wickets to my name,” he said.

“I’m very happy to be back. I don’t think I realised I’ve actually been picked for the all games I’ve been available for so I won’t be surprised if in the next game or the game after that I am rested.

Pakistan head coach Misbah-ul-Haq had every reason to be content with his bowlers given their emphatic display in the evening session, but he was equally pleased with the set-up by Masood.

“It was an excellent performance by him, especially against a seam attack of Broad, Anderson, Woakes and Archer,” he said.

“It was good application and his hard work paid off. He’s a hard-working guy, fit, very committed and I think that really showed in this innings.

“He’s scored runs in South Africa, got confidence in Australia, come back in Pakistan and scored runs and now he proved himself here in England.

“We would have been in trouble if he only scored a hundred but 150-plus was really special.”