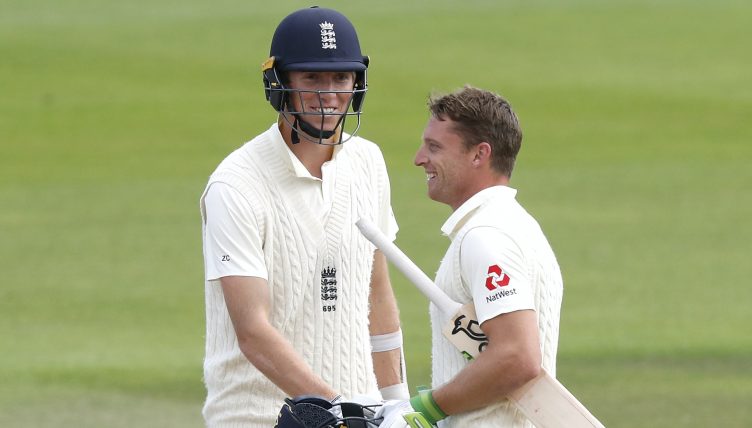 Zak Crawley and Jos Buttler shared a record England fifth-wicket stand of 359 against Pakistan at the Ageas Bowl.

Crawley passed several milestones in his 267 – the 10th highest score ever by an England player.

It was England’s sixth best partnership for any wicket, and here the PA news agency takes a look at some of the other records to fall on a momentous day.

The partnership was England’s highest ever for the fifth wicket and the first to exceed 300. England’s previous best was 254 made by Keith Fletcher and Tony Greig against India at Mumbai in 1973. It was the joint fourth-best stand for the fifth wicket in Test history – just 46 behind the 405 put on by Australia pair Sid Barnes and Sir Donald Bradman against England at Sydney in 1946.

Crawley and Buttler take a top-six place in all-time England Test partnerships, holding the spot jointly with Sir Len Hutton and Cyril Washbrook who put on 359 for the opening wicket against South Africa at Johannesburg in 1948. Peter May and Colin Cowdrey hold top spot with 411 against the West Indies at Edgbaston in 1957. Also above them are Ben Stokes and Jonny Bairstow (399 v South Africa, 2016), Hutton and Maurice Leyland (382 v Australia, 1938), Bill Edrich and Denis Compton (370 v South Africa, 1947) and John Edrich and Ken Barrington (369 v New Zealand, 1965).

Crawley became England’s third youngest double centurion at the age of 22 years and 201 days. Only Hutton (22 years and 58 days) and David Gower (22 years and 102 days) were younger when reaching the milestone. The Kent batsman made the second highest maiden century for England, behind Tip Foster’s 287 against Australia at Sydney in 1903. Crawley is the fifth youngest ever to score a Test 250 after Bradman, Hutton, Sir Garfield Sobers and Graeme Smith, and his 267 eclipses any Test score made by SachinTendulkar, Ricky Ponting and Jacques Kallis – the three most prolific batsmen in Test history.

Buttler came into the final Test of the summer with doubts over his future at this level after an indifferent summer against the West Indies and Pakistan. But he silenced the doubters with a second Test century and a career-best effort of 152 – surpassing his first-class best of 144. Buttler’s only previous ton in his previous 81 Test innings was 106 against India in 2018.