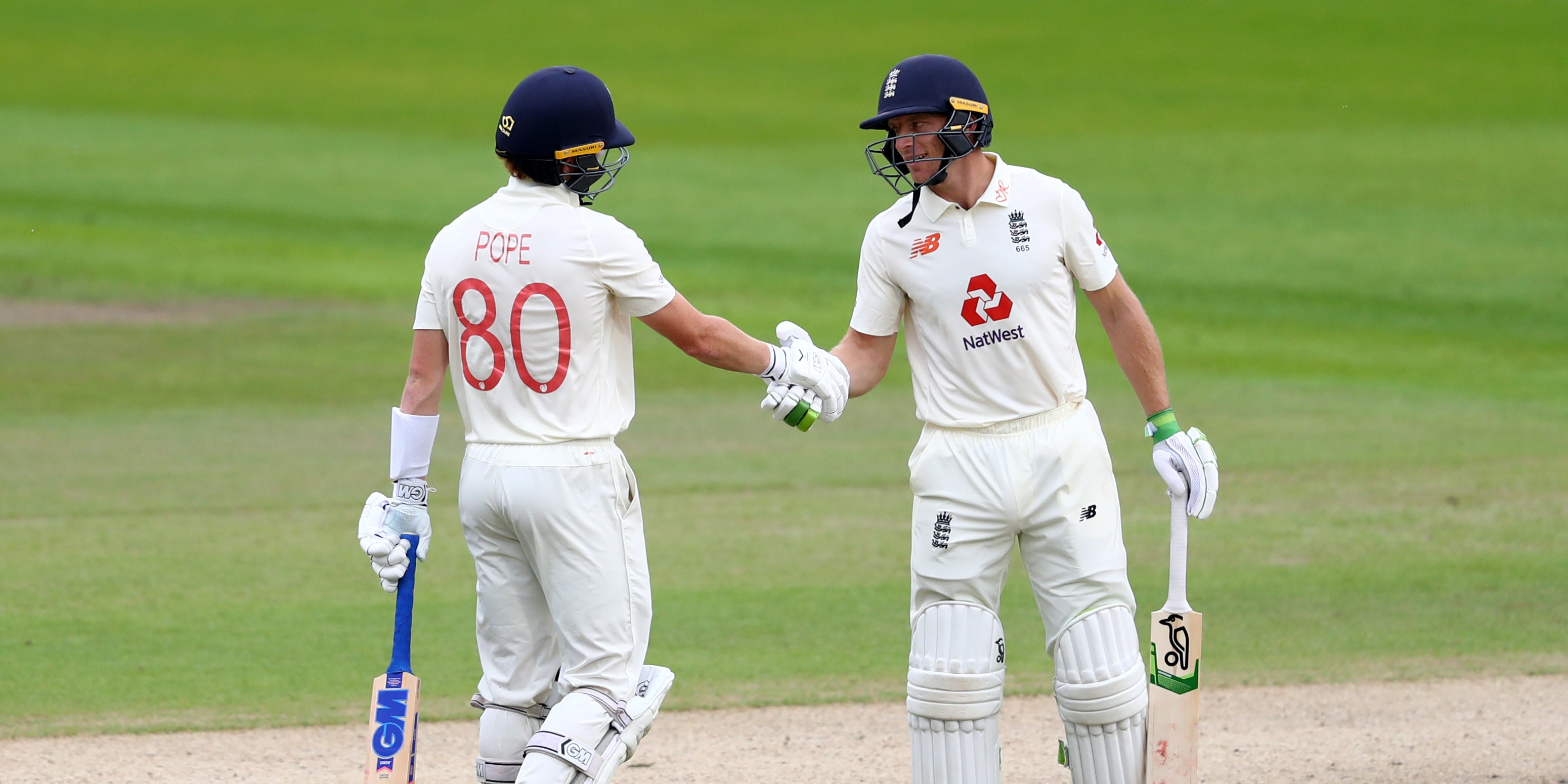 Ollie Pope was approaching his first century on home soil as his partnership with Jos Buttler helped turn the tide on day one of the decisive third Test against the West Indies.

With star all-rounder Ben Stokes not fit enough to play a full part with the ball at Emirates Old Trafford, England gambled on the balance of their team – dropping batsman Zak Crawley to make room of an extra bowler.

At 92 for three it looked as though their boldness could backfire, with man-of-the-moment Stokes, his fellow second Test centurion Dom Sibley and captain Joe Root all back in the pavilion.

But Rory Burns steadied the ship with 57 before the evening session saw Pope reel off a wonderful 91 not out to lead England to 258 for four.

The Surrey batsman arrived with a top score of 28 from his previous seven knocks in English conditions but showed his quality when it was badly needed, hitting 11 boundaries before bad light ended his hopes of converting before the close.

He found an ideal partner in Buttler, whose place has come under question after a lean run with the bat. A good time, then, to make a responsible 56no – his first half-century since last September and part of a 136-run stand.

England had started the day with a surprising team selection, Jofra Archer and James Anderson both recalled as Sam Curran and Crawley made way. The latter, at least, represented an eye-catching omission.

There were shows of support for two worthy causes before play – with both teams donating limited edition red caps for auction in aid of the Ruth Strauss Foundation and taking the knee for Black Lives Matter.

Those moments of sobriety gave way to whooping and hollering at the end of the first over, the West Indies celebrating wildly as Kemar Roach trapped Sibley lbw for five-ball duck.

He had batted over nine hours for his first home century last week, but failed to trouble either the timekeepers or the scorers this time. That brought Root in at three to face the new ball, a direct consequence of his decision to dispense with Crawley.

For 20 overs he did the job, adding 46 alongside Burns and helping take the shine off. Things went wrong when the pair’s optimistic attempt at a single cost the skipper his wicket.

Roston Chase’s pick-up and throw from short third man was exemplary, flicking a bail on its way through to the wicketkeeper as Root came up short for 17.

At lunch England were going nowhere fast on 66 for two, with just three boundaries in the session.

Burns and Stokes began to lift things in the afternoon, looking settled until Roach intervened. Coming round the wicket he unleashed three short balls in a row at Stokes, hitting him on the helmet with the second, before nipping one in off the pitch and flattening the stumps.

After scoring 254 runs in the previous match, Stokes’ departure for 20 was a crucial breakthrough. Pope was also hit on the helmet by Roach but made it through to tea in one piece despite losing Burns.

Chase was the successful bowler, but the wicket was just as much Rahkeem Cornwall’s as the 22 stone all-rounder plucked a sensational one-handed catch.

At 131 for four the balance of power was very much up for grabs in the evening session and England might well have surrendered it had Pope been caught for 30, top-edging Gabriel off the toe of the bat.

If Chase had been able to make another yard at mid-on it would have made for an ugly dismissal but instead instead went down in the book as nothing more than a single.

Pope took control impressively after that scare, moving to his half-century in a flurry of boundaries. He showed off his full range, thrashing Roach on both sides of the wicket, middling Gabriel past mid-on and stroking Holder through Cover.

He had the taste for it now and continued accepting the invitation to drive through the off-side. Buttler had been largely passive in support but after having ground to 18 he proceeded to go hard at Cornwall, heaving two sixes over wide long-on in the space of four deliveries.

That took England past 200, with every boundary furthering the shift in fortunes. Pope brushed off another lbw referral on 70 and Buttler brought up his own half-century in 104 balls before a blast from the second new ball was cut short by the gloomy conditions.