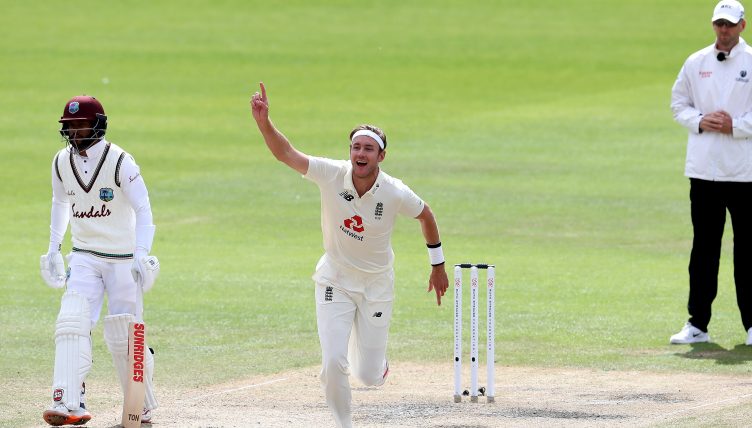 Stuart Broad sealed his place in one of cricket’s most exclusive clubs, picking up his 500th Test wicket on the final morning of England’s series decider against the West Indies.

Just six other players have ever achieved that feat, including Broad’s long-time partner James Anderson.

The pair have shared so much over the years and their enduring link extended to the identity of Broad’s landmark victim – opening batsman Kraigg Brathwaite, who had also been Anderson’s 500th scalp back in 2017.

The teams were forced off after 25 minutes and 25 runs scored but the brief delay did not derail the 34-year-old seamer, who struck with the third ball of his fourth over.

Having risked a couple of boundaries with his aggressive line, he went full and straight at Brathwaite and landed one of the clearest lbw appeals imaginable.

The umpire’s finger went up immediately and there was never any prospect of a DRS review delaying Broad’s celebrations. He was mobbed by his team-mates and eventually held the ball aloft to mark the moment, albeit in front of the customary empty stands in this bio-secure Test series.

That left the tourists 45 for three, with England well on the way to sealing a 2-1 series win.