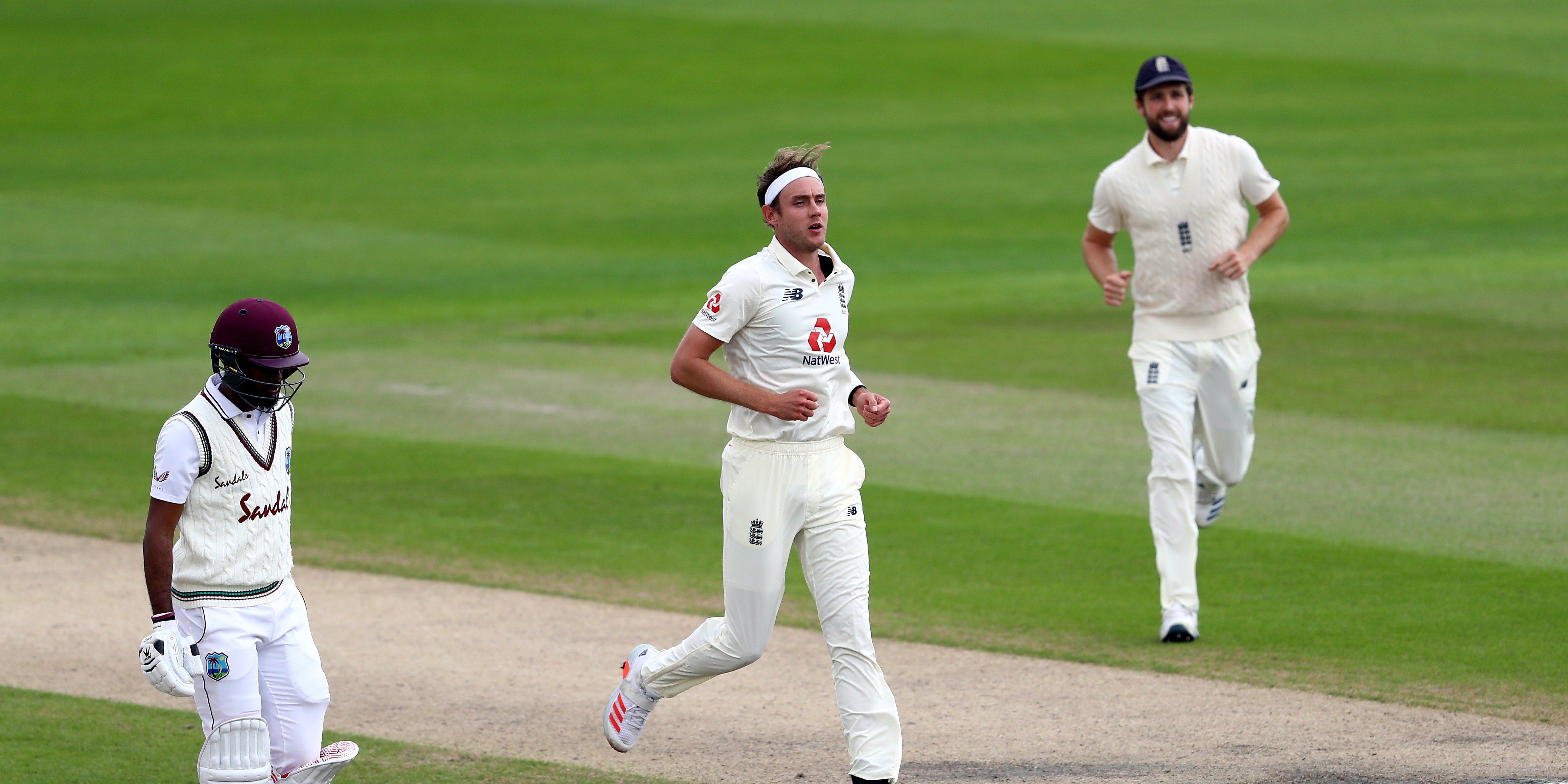 Stuart Broad made his presence felt with bat and ball as England established a strong hold over the West Indies in an entertaining second day of the decisive third Test.

Broad arrived at the crease earlier than expected after the tourists seized the initiative with four quick wickets in the morning and proceeded to embark upon a remarkable counter-attack, hitting a rapid 62 in 45 balls.

He needed just 33 to reach his half-century, leaving him joint third among England’s quickest Test fifties, and lifted his side to 369 all out from the brink of something much smaller.

The 34-year-old then returned to his day job, dismissing opener Kraigg Brathwaite for one with the fourth ball of the reply to continue a memorable day at the office.

The Windies moved to 59 for three at tea after Jofra Archer produced a fierce delivery that was far too good for John Campbell and James Anderson bested Shai Hope.

England resumed with 258 for four on the board, with Ollie Pope on 91 not out and Jos Buttler 56no and high hopes for both. Instead, the first hour belong emphatically to the bowling side, with Shannon Gabriel and Kemar Roach serving up a storm with the second new ball.

Pope had a brief and torrid stay as he failed to add to his overnight score, dropped by Rahkeem Cornwall at slip before Gabriel made up for that disappointment by forcing one through his defences and into the stumps.

Chris Woakes came and went quickly, dragging Roach into his stumps to give the paceman his 200th wicket – the ninth West Indian to reach the mark and the first since Curtly Ambrose in 1994.

Broad signalled his intentions from the off, hooking Roach for six off his fourth ball then lifting Gabriel over cover. The introduction of Holder only accelerated things, with Broad blazing the all-rounder for seven boundaries in no time, including for three in a single over.

Broad was offered too much width and indulged himself to the full, bringing up his fifty with a full-blooded pull that left him behind only Sir Ian Botham in balls taken and level with Allan Lamb and Andrew Flintoff.

His fun eventually stopped when he pinged a Roston Chase full toss to Jermaine Blackwood on the ropes, with a bruised Holder finishing things by dismissing James Anderson.

The old firm of Anderson and Broad renewed their long opening partnership after lunch, having been kept apart for the previous two Tests, and it was the latter who landed the first blow.

It was the important wicket of the dogged Brathwaite, fiddling outside off stump and handing Joe Root a regulation catch at slip. After his entertaining runs, this was a reminder of the primary skills Broad brings to the side.

Anderson should have joined in when Hope nicked the ball on nought, but Ben Stokes shelled the chance. John Campbell and Hope offered some resistance as they put on 43 but England struck twice in the run-up to tea, Archer coming on first change and conjuring an unplayable short ball that Campbell fended uncomfortably to gully.

Anderson made it three after switching to the end that bears his name, Hope edging a wonderful delivery that demanded a shot but left nowhere to go. Buttler gathered the edge, leaving Shamarh Brooks and Chase in charge of clearing the 310-run deficit.