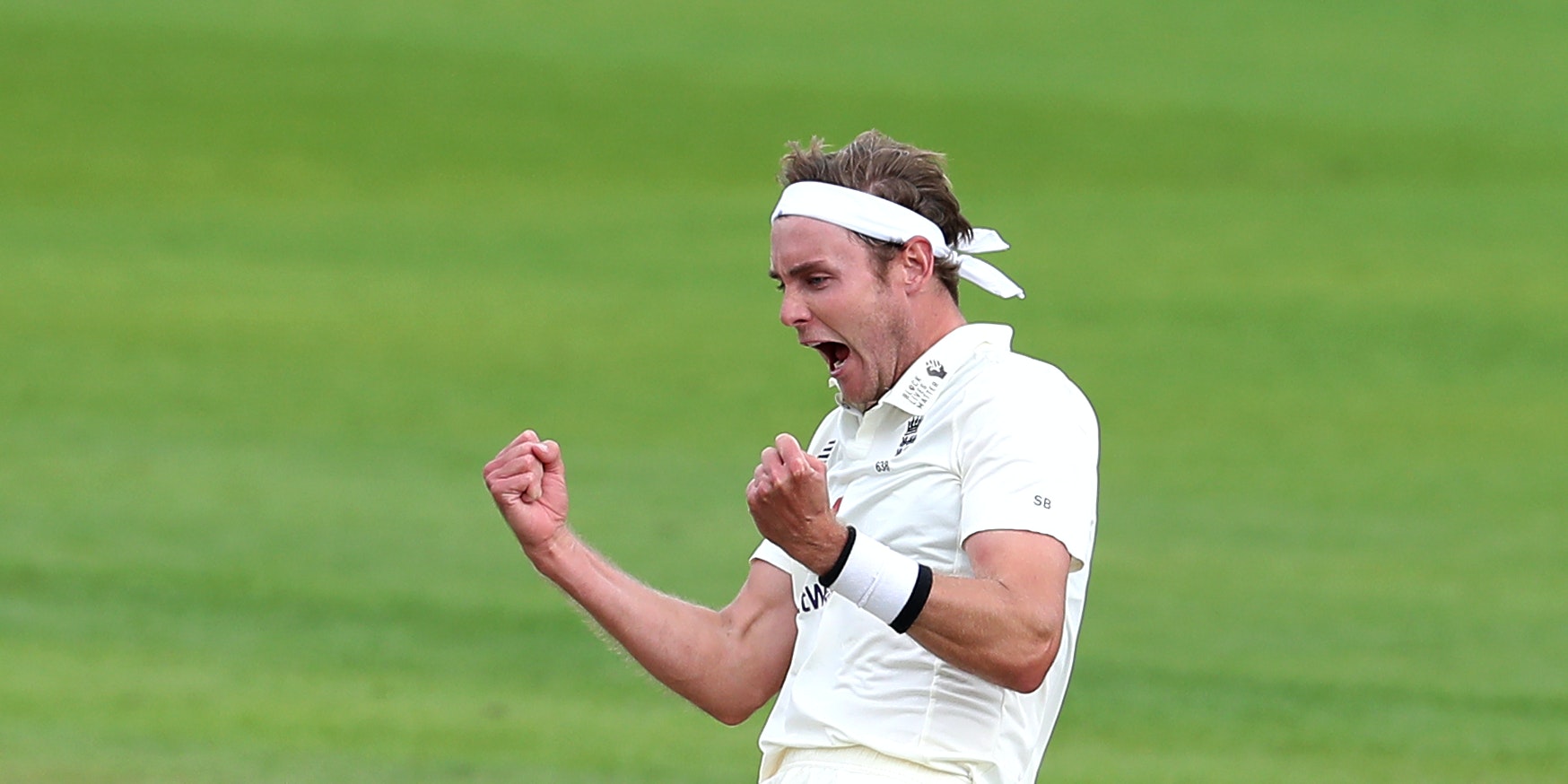 Stuart Broad led England’s charge with bat and ball, grabbing the initiative for his side on day two of the must-win third Test against the West Indies.

Broad began his memorable outing with a devil-may-care knock of 62, rolling back the years for his highest score since 2013, before returning to his day job and dismissing two of the tourists’ top five.

His dual efforts helped steer England into a position of strength, helping them overcome an early flurry of wickets to post 369 and playing a central role in keeping the reply to 137 for six.

With a concerning weather forecast England may yet need the follow-on to push for the victory they need to reclaim the Wisden Trophy 2-1, but with a lead of 232 that option remains in play.

Broad was reunited with long-time partner James Anderson for the first time in over six months, the veteran duo having been kept apart for the first two matches of the series, and they wasted no time finding a familiar groove.

Anderson was typically classy and controlled, matching Broad’s figures of two for 17 while Jofra Archer and Chris Woakes each chipped in.

While that hardly qualifies as a surprising return given their peerless combined record, nobody expected Broad to register England’s third fastest half-century in Tests. Once a player with genuine all-round prospects, he has drifted towards genuine tailender status and frequently come in last at number 11 in the past year.

Yet England needed him to deliver here and he did so in joyous fashion.

The first hour was claimed emphatically by the bowling side, with Shannon Gabriel and Kemar Roach serving up a storm with the second new ball to take the score from 258 for four to 280 for eight.

The first victims were Ollie Pope and his hopes of a second Test hundred. After some brilliant strokeplay on the first evening he had a brief and torrid stay, failing to add to his 91, dropped by Rahkeem Cornwall at slip and finally losing his stumps to the charging Gabriel.

Woakes came and went quickly, dragging down his stumps to make the Roach the ninth West Indian to 200 wickets and the first since Curtly Ambrose in 1994. Both pacemen struck again with low catches from Jason Holder at slip, Buttler (67) nicking Gabriel and Archer beaten by Roach.

That made it four wickets for 18 in 24 deliveries, with England yet to wake up. Broad was quick to change that, hooking his fourth ball for six to leave Roach wide-eyed then lifting Gabriel over cover.

The introduction of Holder only accelerated things, with Broad blazing seven boundaries off skipper as he dropped too short and wide in a painful spell. Broad looked delighted with himself, not least when bringing up his fifty with a full-blooded pull that left him behind only Sir Ian Botham in balls taken and level with Allan Lamb and Andrew Flintoff.

The fun eventually stopped when he pinged a Roston Chase full toss to Jermaine Blackwood on the ropes, with Anderson last man out for 11 leaving Dom Bess stranded on 18no.

The West Indies began their response immediately after lunch and never really managed to get on top in the face of some high-class bowling.

England left their opponents 59 for three in the middle session, then took another two in the evening before bad light denied them another 30 minutes.

A buoyant Broad got things moving with the important wicket of the dogged Kraigg Brathwaite, who fiddled at one that demanded attention outside stump and fed Joe Root at slip.

Anderson should have joined in when John Campbell to second slip on 10, but Ben Stokes shelled a regulation chance in the cordon. Campbell and Shai Hope offered some resistance as they put on 43 but England struck twice in the run-up to tea, Archer coming on first change and conjuring an unplayable short ball that Campbell fended uncomfortably to gully.

Anderson made it three after switching to the end that bears his name, Hope edging a wonderful delivery that demanded a shot but left nowhere to go.

A shortened closing session of just over 22 overs brought two more successes as the pressure continued to build, Anderson taking care of Shamarh Brooks moments after the restart with a textbook delivery that kissed the inside edge on its way to Buttler.

Woakes was the only one of England’s quartet without a wicket but he ended that in some style, jagging one back in to Blackwood and knocking over middle stump. Archer endured a luckless last burst and was halted mid-over by the fading light.