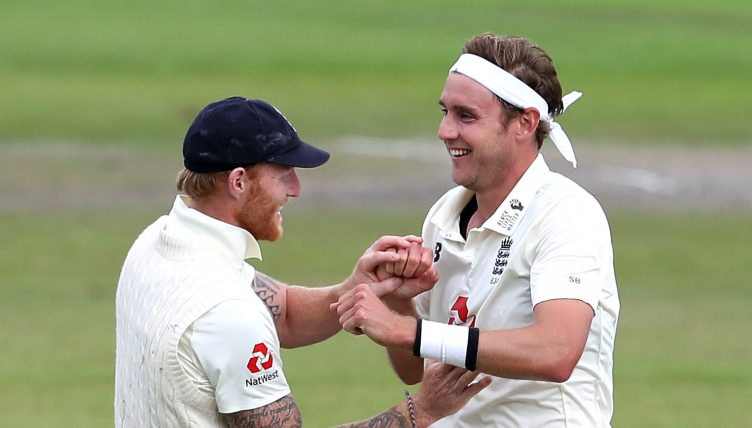 England’s lead in the decisive third Test against the West Indies swelled to 258 on the third afternoon, after Stuart Broad’s brilliant return of six for 31 strengthened the home side’s grip.

The tourists successfully avoided following-on, denying England one clear route to victory, but fell in a heap as soon as Broad belatedly entered the attack and mopped up the last four wickets.

A score of 197 all out left England 172 in front, with Dom Sibley and Rory Burns putting on 86 in a toothless afternoon session that gently cemented the advantage.

Whether or not they have time to finish the job largely depends on the Manchester weather over the next 48 hours but Joe Root may come to rue not using Broad earlier on Sunday morning.

With the West Indies needing to add another 33 to their overnight score of 137, Root kicked off with Jofra Archer and Chris Woakes as Broad and James Anderson waited their turn.

It took less than eight overs for the Jason Holder and Shane Dowrich partnership to reach their first target, ensuring England would bat again, with the seam pair lacking inspiration. Woakes had one celebration squashed when Holder was caught by a diving Ollie Pope, only for replays to confirm a front-foot no-ball.

Root belatedly turned to his most experienced men and it was Broad who seized the moment, taking all four wickets for 14 runs in a ruthless four-over spell.

Holder was first to go for 46, Broad conjuring a familiar dismissal – full, attacking the stumps and nipping into the pads. He continued working away on that same nagging length and soon pocketed another lbw decision to pick off Rahkeem Cornwall for 10.

Kemar Roach was next, nicking to Root at slip to complete a double-wicket maiden and complete his 18th five-wicket haul – overtaking Fred Trueman, Derek Underwood and Graeme Swann to go fourth on England’s list.

Sibley and Burns added 10 to England’s tally in a 20-minute burst before lunch, then batted through the afternoon session for another 76.

Quick runs would have been desirable but neither opener found it easy to ramp up their natural tempo. Burns chewed through exactly 100 deliveries for his 38 not out, with Sibley scoring two more runs from five fewer deliveries.

Burns almost departed for 12, skipping down the pitch at Roston Chase and offering a stumping chance. Joshua Da Silva was keeping wicket as a substitute fielder, Dowrich having been hit in the face by a 90mph offering from Shannon Gabriel, but his hopes of announcing himself on the international stage disappeared when his legs buckled as he lunged for the stumps.