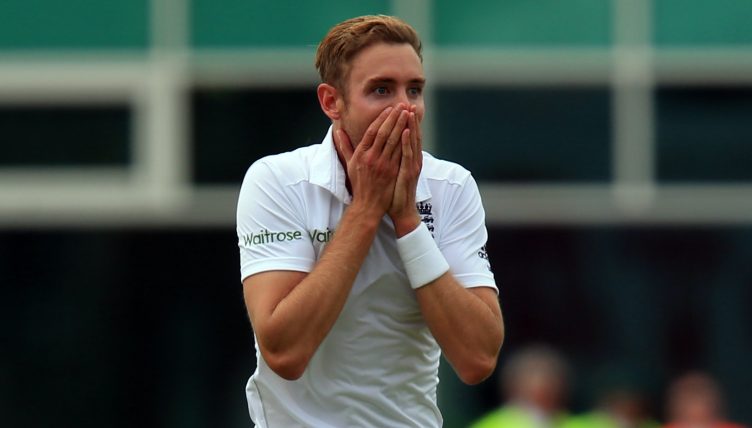 Stuart Broad became the second Englishman and only the seventh bowler in history to reach 500 Test wickets on Tuesday against the West Indies at Old Trafford.

Undoubtedly Broad’s finest hour, this was perhaps among the most memorable feats in Ashes history. Bowling unchanged from the pavilion end on his home ground, Broad routed Australia almost single-handedly in the space of 57 deliveries. He had Chris Rogers caught by Alastair Cook at slip with his third ball, and doubled up when Steve Smith also fell in his first over. Broad finished with figures of 9.3-5-15-8, and Australia were blown away for 60 all out in 18.3 overs – en route to defeat by an innings and 78 runs in under three days, losing the Ashes in the process.

Broad is the only Englishman with two Test hat-tricks to his name. His first came against India, five years ago and again on his home ground in Nottingham. England were thoroughly dominant all summer, on their way to number one in the world under Andrew Strauss, and Broad did his bit when he had MS Dhoni flashing an attempted drive to second slip and Harbhajan Singh lbw despite an inside-edge in India’s pre-DRS days, before bowling Praveen Kumar. Broad repeated the dose three years later, this time against Sri Lanka at Headingley where the successive scalps of Kumar Sangakkara, Dinesh Chandimal and Shaminda Eranga were not enough to stop England losing the match and series.

Broad’s only Test century was a remarkable one, and despite coming in a match forever tarnished by the spot-fixing scandal which engulfed the Pakistan team and resulted in prison sentences for each of the three perpetrators, it remains a proud achievement for the son of a former England opening batsman. Strauss’ team appeared washed up, batting first, as teenage left-armer Mohammad Amir reduced them to 102 for seven. Broad began counter-attacking, however, in a record stand of 332 with Jonathan Trott. His is the highest score by any England number nine, and helped his team to 446 all out in a match they won by an innings and 225 runs.

This was another unstoppable Broad special. England had eked out a 10-run first-innings lead at the Wanderers, and South Africa’s openers Dean Elgar and Stiaan van Zyl appeared set to lay a feasible foundation second time round – until Broad seized the moment again. In under 10 overs, he had the first five wickets. It was he too who completed the rout when he had Faf du Plessis last out, caught-and-bowled, as South Africa mustered just 83. England went on to win by seven wickets inside three days, wrapping up the series with a match to spare.

The Ashes were again in Broad’s sights, and he once more made no mistake. His five first-innings wickets restricted Australia to a 32-run lead. In the second innings, the tourists appeared on track to halve the deficit to 2-1 with one to play when they reached 168 for two in pursuit of 299. Broad had other ideas, though, finishing with six for 50 as Michael Clarke’s men lost their last eight wickets for 56 – and England clinched a series win.