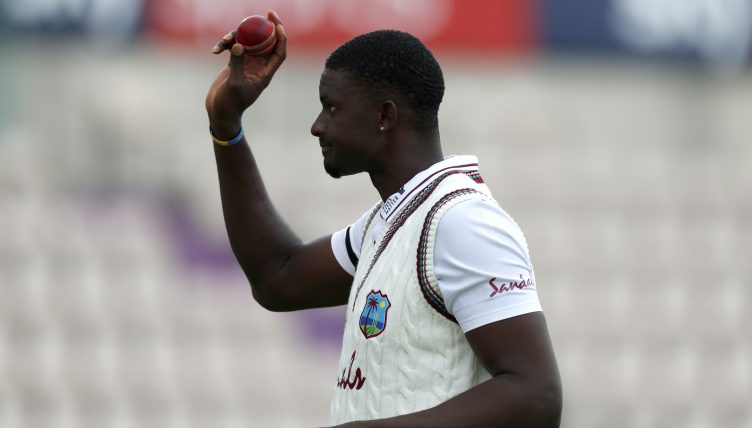 West Indies captain Jason Holder has a laser-like focus on the second Test against England, disregarding the opportunity the tourists have to make history over the next couple of weeks.

Having seen off their hosts by four wickets in the #raisethebat opener at Southampton, the Windies have two chances at Emirates Old Trafford to seal a first Test series win on these shores in 32 years.

Not since 1992/93 – when the likes of Brian Lara, Courtney Walsh and Curtly Ambrose were in their pomp – have the Windies prevailed in an overseas Test series consisting of more than two matches against major opposition.

But Holder, the top ranked Test all-rounder in the world and the number two bowler, said: “I haven’t mentioned anything about history to the guys. It’s hard for us to get caught up in the peripheral stuff.

“Winning the first Test match is just one piece of the puzzle. We’ve got two other games to play and we don’t get ahead of ourselves.

“We’ve got control of the cricket we play, that’s the only thing I’m going to spoon-feed the guys: how are we going to win a cricket game? Afterwards we can look back and feel pleased with whatever we achieve as a group.”

Holder confirmed John Campbell is likely to be available, with the opening batsman struck flush on the boot by a Jofra Archer yorker. He retired hurt but was back at the crease as the Windies sealed victory in Southampton.

While Holder was pleased with how his side fared last week, he has called for greater consistency from his batsmen, adding: “We’re still to get a hundred with the bat, we’ve had a few starts and got a few half-centuries.

“It’s more for the batters to convert a few more starts which they got in that first Test and kick on and get a big score.”

One batsman whose place is under a little scrutiny is Shai Hope, who made 16 and nine in the series opener and whose only two hundreds in 32 Tests famously came at Headingley on the Windies’ last visit to England in 2017.

Holder, though, has backed his number three to come good as he said: “What I want to really do is keep encouraging our guys. Shai’s a quality player, we’ve seen that particularly the last time we came here to England.

“I’ve got all confidence Shai Hope will deliver. He just needs to get himself in, get himself going and he’s going to go big for us.”

The Windies’ recent win seems to have been the subject of attention back home, and Holder spoke to three Prime Ministers from the Caribbean – Dr Ralph Gonsalves in St Vincent, Mia Mottley in Barbados and Dr Keith Mitchell in Grenada – as a guest on a radio show on Tuesday to discuss the matter.

He added: “This Covid period has really put a dampener on things for the world and things like cricket, especially in the Caribbean can unify the Caribbean.

“It is really good to see how many hearts we’ve pleased in the Caribbean so far but in order to take it a step further they all want us to win this series.”