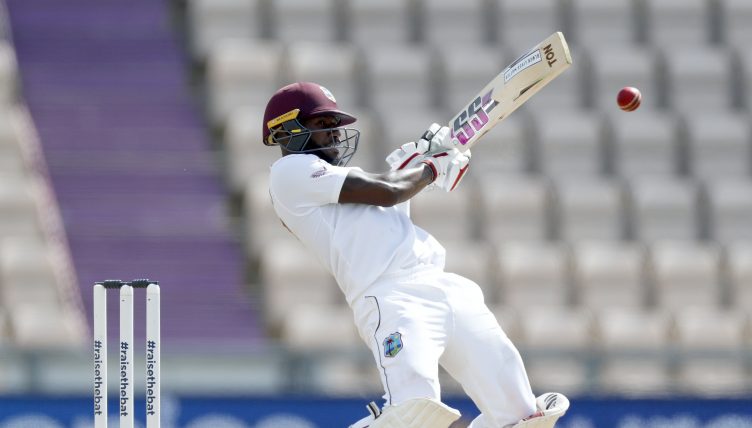 Jermaine Blackwood took advantage of costly errors in the field as he moved the West Indies within sight of a day-five victory over England in the first #raisethebat Test.

The tourists were 143 for four at tea chasing 200 at the Ageas Bowl, with some invigorating fast bowling from Jofra Archer looking like it would not be enough for the hosts.

Blackwood was 65 not out heading into the final session, but was let off on five by England captain Ben Stokes and again on 20 by his deputy Jos Buttler.

England had been favourites at lunch with the tourists 35 for three, Archer blowing away Kraigg Brathwaite and Shamarh Brooks as well as forcing John Campbell to retire hurt. A stand of 73 between Blackwood and Roston Chase (37) reversed the picture to seemingly tee up a fine win.

The day began with England adding 29 for their last two wickets, both of which fell to Shannon Gabriel to complete his five-for.

Archer had batted with bravado for 23 but his primary job is to wreak havoc with the ball and he duly did so.

His first delivery yielded a partial but important success, thumping Campbell’s front foot with fast yorker and eventually forcing him from the field in search of ice treatment. A more tangible breakthrough followed, Brathwaite deflecting a full inswinger into his stumps.

Brathwaite had been described by head coach Phil Simmons as “the glue” of the tourists’ batting line-up but here he had come unstuck for just four.

Brooks proved even simpler prey for the 25-year-old, trapped on the crease and deceived through the air for a five-ball duck. Archer was tearing into his celebrations before the lbw was even confirmed.

At 12 for two and with Campbell in pain in the dressing room, things were firmly in England’s favour.

Wood picked up the baton after five heady overs and promptly increased the pressure, flattening Shai Hope’s off stump with his fourth ball via a flick off the pad.

Chase and Blackwood made it to lunch but at that stage 165 runs seemed a mountainous ask. Yet when play returned the tone shifted, with swing suddenly a thing of the past and England beginning to fray in the field.

Dom Bess should have had Blackwood for five but in anticipating the intended cut shot rather than the thick edge which arrived, Stokes left himself in the wrong position at slip. He flung out a hand to try and rescue the situation but got fingertip contact.

The first 10 overs of the afternoon brought 33 runs, all but doubling the score, and when Blackwood gloved Stokes down leg he had a second slice of luck as Buttler grassed the chance one-handed. A leg-bye was signalled but Stokes’ reaction suggested a review would have followed.

The 50 stand ticked by in 93 balls and England’s error count continued – Zak Crawley fumbling a possible run-out chance and Rory Burns failing to put a hand on Blackwood’s next slash through gully.

Worse still Stokes had over-stepped and the ball zipped away to take four more off the target. Chase saw his side to exactly halfway when Archer conjured an unplayable ball bouncer to end 24 overs of frustration.

It climbed at high speed, followed the batsman and flicked glove and helmet before looping through to Buttler. New man Shane Dowrich almost fell to a similarly fierce delivery but England’s joy was cooled when replays confirmed it struck flesh rather than wood.

Three boundaries then followed in five balls, Dowrich taking care of a full toss before Blackwood edged James Anderson to third man and flicked through midwicket.