Zak Crawley on brink of maiden Test century for England 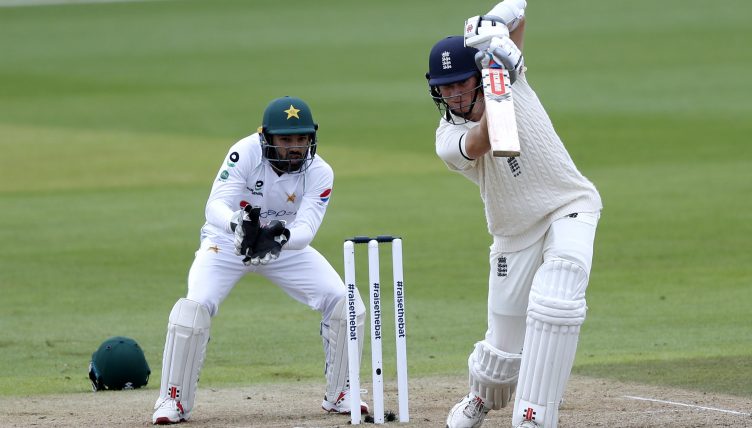 Zak Crawley was closing in on a maiden Test century as his high-class innings guided England to 184 for four on the first afternoon of the series decider against Pakistan.

Crawley, who has made just three first-class hundreds for Kent, reached 97 not out at tea with a skilful and mature performance.

The 22-year-old, playing his eighth Test, hit 11 fours along the way as he shared stands of 61 with Dom Sibley and 57 with Jos Buttler.

Having reached his half-century from the final ball of the morning session, Crawley’s timing just failed him as he reached the break three short of his milestone.

England recalled Jofra Archer in place of Sam Curran, the only change in either team, but the paceman will have to wait for his chance to make an impact.

Instead it was the Pakistan seamers who got the first chance with the new ball, a profitable business so far this summer.

Following scores of four, 10 and nought Burns was gone for six, play at one that pitched around middle stump and took the edge after nipping away off the pitch.

Crawley was next up and marked his arrival by pushing his first ball from Shaheen through square leg for four. That was the start of a busy spell of scoring from him as he put bat on ball with regularity and placed his shots well.

There were a couple of nice strokes off Naseem Shah, a flick down to fine leg then a strong pull, as he led a fifty stand with Sibley, who was going about his business is steadier fashion.

The Warwickshire man had been looking to use his feet to the spin of Yasir Shah, hoping to open up the leg side but eventually paying with his wicket as he looked to whip towards mid-wicket. He reviewed the lbw decision but Michael Gough’s judgement was typically sound.

Crawley’s rapid scoring was slowed as Naseem and Yasir tied things up nicely and after 16 balls of 49 it looked as though he would enter the break just short of his milestone. Instead he got there with the final ball of the session, driving stylishly to long-off.

Root picked up the baton after lunch, showing his intent by working the first ball of the session for three then taking three boundaries off Naseem as the paceman struggled to settle on a line and length.

The England skipper was looking good for 29 when Naseem produced the perfect response, full to the stumps and seaming away as it clipped the edge. Mohammad Rizwan went in front of slip and safely finished the job.

New man Ollie Pope added just three before he was undone by Yasir’s slider for the second innings in a row, stepping on the back foot and allowing the ball to go through him and part the stumps.

By this point Crawley had emerged from a quiet moment, stroking a pair of pleasing drives down the ground to announce the fact. He went past his previous high score of 76 with a hard run three and had a slice of fortune when his top-edged pull off Shaheen landed safe.

Buttler proved a positive influence at the other end, scoring briskly, but ,despite adding a nice swivel pull to his boundary collection, Crawley headed to the pavilion one shot away from a fine achievement.