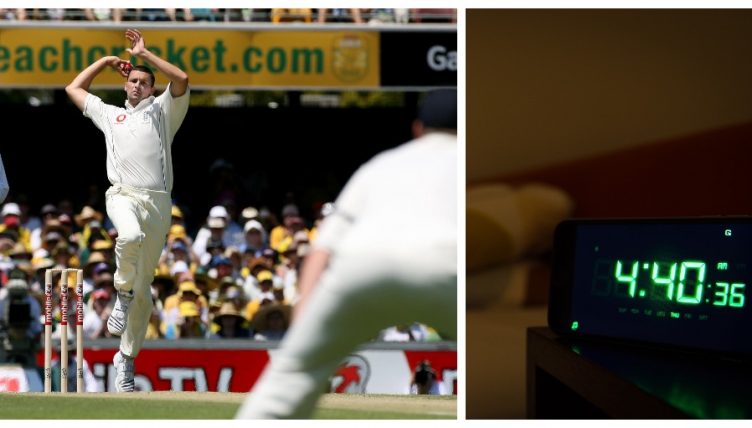 I remember my first time. Staying up to watch the Ashes Down Under in 2006, excited by the prospect of many of England’s 2005 Ashes heroes battling it out with the Aussies again, this time in Australia. I reckon I lasted longer than most of the cricket-induced night owls on that occasion. A few will have watched Harmison’s wide with the first ball of the series and immediately thought f*** this – I confess the thought did cross my mind.

I didn’t last the whole night on that first time but I have on a few occasions since. In my schooldays, when at uni, when teaching (9X4 learnt f*** all about electron shells that morning), and now with the excuse that it’s for work. Here are ten top tips for you nocturnal cricket watching heroes, with the next sleepless night on your doorstep…

1. Don’t drink (too much) alcohol
You know the saying: Beer before wine and you’ll feel fine; wine before beer and you’ll feel queer; wine or beer in the opening session of your all-nighter and you’ll be asleep before the first drinks session. Alcohol is a depressant and is therefore very soporific. A glass of whiskey, or your spirit of choice, somewhere between lunch and tea is recommended, however. A sharpener, if you will.

2. Caffeine
You might not necessarily want to drink six to seven cups of tea or coffee, and the sugar content in energy drinks makes them a real danger, but caffeine is a must. There’s a very fine line between the perfect amount of stimulant and too much. You don’t want to be in the midst of brutal caffeine shakes just before your first nap of proceedings for example. A caffeine drip would be ideal.

3. Don’t clock watch
The drinks and session breaks don’t make this easy, but you have to avoid the temptation of glancing at the time too frequently. With England’s apparent new patient Test match approach we could see long periods of play of relative inaction on this New Zealand tour, which would be a positive after years of batting collapses and a comically unsettled order, but doesn’t lend itself to the nocturnal cricket audience. It’s at these points that commentator comments like, “it’s been 125 minutes since the last boundary”, are enough to make you question what you’re doing with your life, without watching the second hand tick by, ramping up the shame of your choice to stay up all night.

N.B. I do not advise changing your clocks to New Zealand time. This leads to confusion in the pre-tea lull, and ultimate panic following the tea-time nap.

4. Napping
According to Milner et al. (2009) a nap of between 10 and 20 minutes can help you stay alert for an extra two hours. A technique I perfected the last time I used the scholarly abbreviation ‘et al.’ in a piece of work.

We’ve all been in the situation, before a night out for example, when you take a nap that’s just a little bit too long, making you feel worse or – the grandest of all sins – leading to you completely sacking off your plans in favour of turning said nap into a sleep. A change of innings or tea are the perfect length of time for some shut-eye, but nap through lunch and you’ll be sleeping till morning.

5. Choose your main meal carefully
Pasta is a fine choice. Not only because – as a complex carbohydrate – it provides energy that is released slowly, but also because it’s easy to make a couple of portions. Have your first sitting at your normal time, 8pm maybe, in the knowledge that a second helping will be waiting as the players go for their lunch, around midnight for you.

6. Snacks
The order of your snacking is particularly important. Carbs are the way forward early doors – crisps, popcorn, some crackers maybe. And before scurvy sets in, raid the fruit bowl. Oranges, apples, bananas, you know – the fruits. Artificially sugary foods should be a last resort. That ‘sharing bag’ of Minstrels initially appears your friend but will quickly turn to foe when the sugar crash kicks in an hour or two later. A celebratory Mars bar with stumps in sight is the way to go.

N.B. No requirement to hide Monster Munch behind TV, just enjoy the thought of Gary Lineker’s emotionless face between takes on this photoshoot.

7. Social media
This isn’t an Ashes summer bandwagon, you’re not lumped in with the cricket supporting shitmunchers, you’re in a select group, so make the most of it. Shout it from the rooftops of Twitter or Instagram, or on your Whatsapp group of like-minded cricketing nuts/losers. I’m watching, and I’m watching all night! Never dismiss the strength of the pack mentality.

8. Score predictions
With mates, on social media, with yourself (a bit sad) – this is the carrot-and-stick principle. The prize of sometimes being right, greatly outweighs the downside of almost always being wrong when predicting session or end-of-play scores. Gerald from works thinks we’ll be six down? Ha! With Joe Root coming in at four? Please! I’m going to stay up to make sure he was wrong, then rub it in his face. See – a juicy, juicy carrot.

9. Don’t expect notoriety
There’s no prize for getting through the night. As much as you may think the achievement notable, as do those in your social media all-nighter bubble, ‘normal’ people do not. Responses include: “Why?”; “Who was playing?”; “You look dreadful”; and of course “That’s a weird time to be playing cricket.”

10. Give up
It’s OK. Maybe you’ve got a job you care about enough not be wrecked for, or you don’t want to ruin the next two weeks of your life as your body clock adjusts. You can always check the score in the morning, like everyone else…