The Seven Deadly Sins of the English summer of cricket

This summer of English cricket has been sinful, from start to finish. These are the Seven Deadly Sins that reared their ugly heads in the most gripping, beautiful and poetic of ways, to provide us with the greatest summer of cricket of all time.

Gluttony
It is almost never acceptable to have a beer before 10am. At the airport before a holiday, yes, and of course, at the cricket. If you’ve not had a couple by that time in the Eric Hollies at Edgbaston or on the Western Terrace at Headingley, you’re never going to catch up. If you’ve not had six by lunch and twelve by the end of the day, I don’t know what you’ve been doing…

I remember feeling perturbed to find myself sat next to an elderly gentleman and his wife in the Eric Hollies – picnic basket and comfy seat cushions.

As the sun baked down and the blood alcohol levels rose around me I became more and more aware that these people may not have signed up for the beer snakes (the glory days) and incessant joviality. I turned to the gentleman and slurred: “What brings you to the Eric Hollies?” He replied with a smile: “I come for the cricket – my wife comes for the crowd.” I needn’t have worried.

Greed
I apologise for this in advance – I realise how forced and pathetic it is as a writing cliche but, whatever… The Oxford Dictionary (told you) defines greed as ‘an inordinate and insatiable need for material gain’. Steve Smith’s innings’ were both disproportionately long and seemingly not long enough to satisfy his need to score runs. He got 774 of them, the greedy bastard.

Sloth
Jason Roy’s batting wasn’t lazy per se, but it was certainly ‘without due care’ – the classic definition of sloth. It wasn’t his fault – “Go out and play your natural game” they would have said, “see ball – hit ball Jason”. Verging on genius in the white ball game, Jason Roy won’t play another game of Test cricket, and to be honest, I doubt he cares.

Wrath
Note to all Test batsmen – don’t insight the wrath of Jofra Archer. Matthew Wade will tell you. At the point that Wade decided to incur Archer’s wrath, the Barbadian-born fast bowler had already hit helmets, bodies, ripped stumps from the ground and sent the greedy one from the field with a concussion. So as Wade chirped away at him from short-leg my first thought was he’s going to f*****g regret that – and he did. Don’t poke the bear Matthew – because that particular bear can bowl 96mph.

Envy
“England have won the World Cup by the barest of margins! By the barest of all margins. Absolute ecstasy for England, agony for New Zealand!” Agony and envy. It’s impossible not to be envious in those moments – we’ve all been there.

Whenever I’ve been watching an opposition team celebrate, my own team disconsolate in defeat, I often think: remember these emotions so you can consider the feelings of the losers when you have your moment of ecstasy.

I did try. My thought process went something like this: We won! We won! We won! But poor New Zealand – they deserved more….. Nahhh screw them, they’ll win the rugby. Bring me my chariots of fire!

Pride
This is a picture of me straight after the World Cup final. I had just parkour’d round the room for five minutes and at this point I’m attempting to avoid a heart attack. I’m not sure I’ve ever felt such extreme emotion. The deflected four, Boult’s catch for six, the super over – it makes me feel sick thinking about it, in a good way. 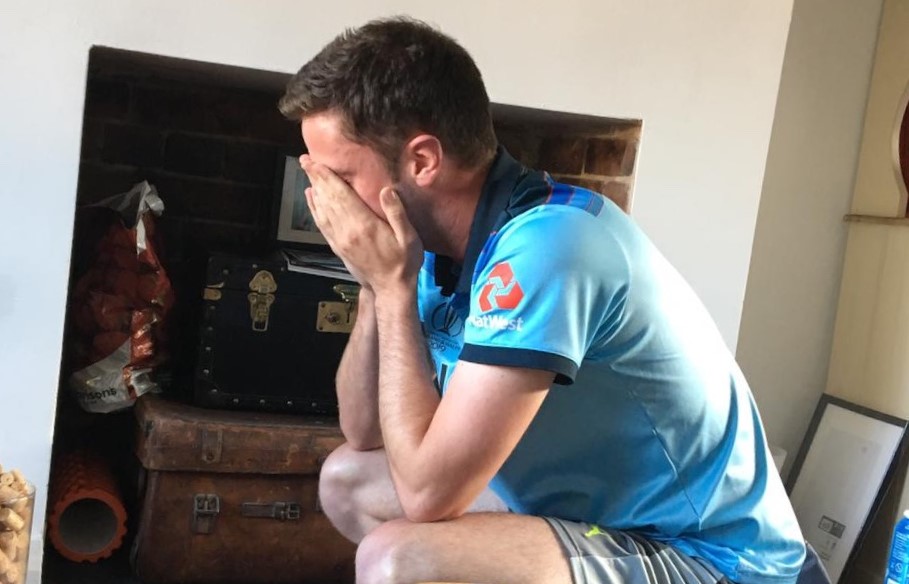 In a time of extreme political unrest it was nice to replace those feelings of pure shame – for a short while at least – with feelings of immense pride in our World Cup performance and the cultural diversity throughout the tournament.

Lust
Lust is often misconstrued as a purely sexual emotion – it’s not. But just to be absolutely clear, I do not have a sexual longing for cricket – merely an intense desire for more of it. That still makes me sound like a psychopath… I’m not, I swear.