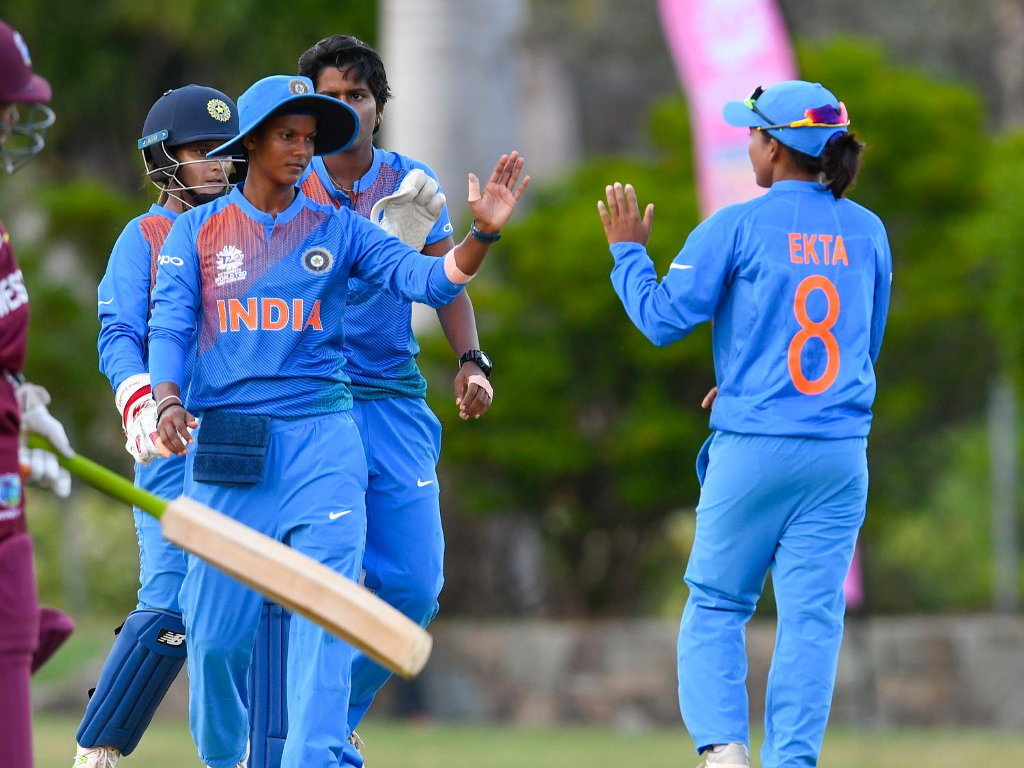 Finalists at last year’s ICC Women’s World Cup in England and Wales, India punched above their weight in the shorter format to gain confidence ahead of the 10-team tournament even as New Zealand recorded a six-wicket victory over Sri Lanka in another match in Antigua. Bangladesh also won their opening practice match by six wickets over Ireland.

Electing to bat, the Windies opener Hayley Matthews (41 off 37 balls) made an explosive start. However, India’s bowlers fought back and restricted the tournament hosts to 115 for eight. Leg-spinner Poonam Yadav took the important wicket of Matthews before Radha Yadav took two quick wickets to supress the destructive Windies middle order and finished with figures of two for 13 from four overs.

India’s reply got off to a bad start with the loss of Mithali Raj for a duck. However, other opener Smriti Mandhana was able to steady the innings and set up victory for India after making an impressive 32 off just 20 balls. The game was rain affected and India were set a revised target of 75 in 12 overs. Despite accurate bowling from Deandra Dottin – which saw her finish with three wickets – India held on to clinch victory with just three balls to spare.

Harmanpreet Kaur of India hits 4 during a warm-up match at Coolidge Cricket Ground on November 4, 2018 in Coolidge, Antigua and Barbuda.

India captain Harmanpreet Kaur: “It was a really exciting game and I am really happy with how our team played today. This is the kind of performance I expect from my team and I hope we can take this confidence into the tournament. It is always nice to win, and we have set high standards for the team, We did really well in the last ODI World Cup and we are expecting good results again here.”

Windies’ stand-in captain Hayley Matthews: “Everybody got an opportunity with bat and the ball and that is important. Despite the loss, we got to see what we have and what the opposition India, have as well. We are looking forward to playing in Guyana and St Lucia now. They are two great and historic grounds, we know the conditions and will have lots of support, so that should help us.”

Shashikala Siriwardena of Sri Lanka hits 4 during a warm-up match at Coolidge Cricket Ground on November 4, 2018 in Coolidge, Antigua and Barbuda.

New Zealand v Sri Lanka: In the second practice match in Antigua, New Zealand sent Sri Lanka in to bat first. The White Ferns dismissed Sri Lanka openers Chamari Athapaththu and Yashoda Mendis cheaply before Shashikala Siriwardana fought back with an impressive 30 to help Sri Lanka to 98. Amelia Kerr was the pick of the bowlers for New Zealand, taking four for 13.

In reply, New Zealand got off to a chaotic start, losing opener Anna Peterson and captain Amy Satterthwaite inside the first two overs. However, the experienced Suzie Bates (34) and Maddy Green (36 retired) guided New Zealand to within touching distance of victory. Shashikala Siriwardana took the wicket of Bates but couldn’t stop New Zealand chasing down the target off 18 overs.

New Zealand batter Maddy Green: “It’s really good to start well, assess the conditions and get the win in. We have only been here a short amount of time so getting some time out there in the middle and getting to know the conditions is hugely beneficial.

“The last World T20 was really exciting in the West Indies and hopefully we can put on a great show with good scores, excellent pieces of athleticism and skill. In turn, I hope we can inspire young people to play and watch cricket.”

Sri Lanka captain Chamari Athapaththu: “We know that 98 is not a good score in T20 cricket and we lost a few early wickets and it was hard to recover from that. I think we fielded well and restricted them in the early stage of their innings but couldn’t quite keep that up. We are looking forward to playing good and competitive cricket in the next matches.”

Jahanara Alam (C) of Bangladesh celebrates with teammates Rumana Ahmed (L) and Sanjida Islam (R) during the ICC Women’s World T20 warm up match between Bangladesh and Ireland on November 4, 2018 at the Guyana National Stadium in Providence, Guyana.

Bangladesh v Ireland: In Guyana, Bangladesh restricted Ireland to 83 for seven after electing to field, with leg-spinner Rumana Ahmed grabbing three important wickets, which included the stumped dismissals of captain Laura Delany (one) and Rebecca Stokell (five). New-ball bowler Jahanara Alam, who became the first woman from Bangladesh to grab a five-wicket haul in international cricket during a recent series against Ireland, finished with two scalps.

Bangladesh got to their target in only 14.4 overs with opener Ayasha Rahman scoring a 26-ball 25 with Fargana Hoque (21 not out ) and Sanjida Islam (20 not out) seeing the team through with a 48-run unbroken partnership. Ireland all-rounder Kim Garth took three wickets to complete a fine all-round performance after her fighting 34 earlier in the day.

Bangladesh coach Anju Jain: “It (the win) will give confidence to all the girls. It was a good game. This is a big tournament and there are some areas that we need to improve on. Spin has always been our strength but I am happy with the approach that the team showed.

Ireland captain Laura Delany: “We are slightly disappointed with the result but the first game was always going to be tough. We played well to our plans and took wickets when they mattered but we just did not stand up enough with the bat. We lost several wickets against the spinners but that does not worry me, if anything (that worries me), it’s poor shot selection, poor execution.”