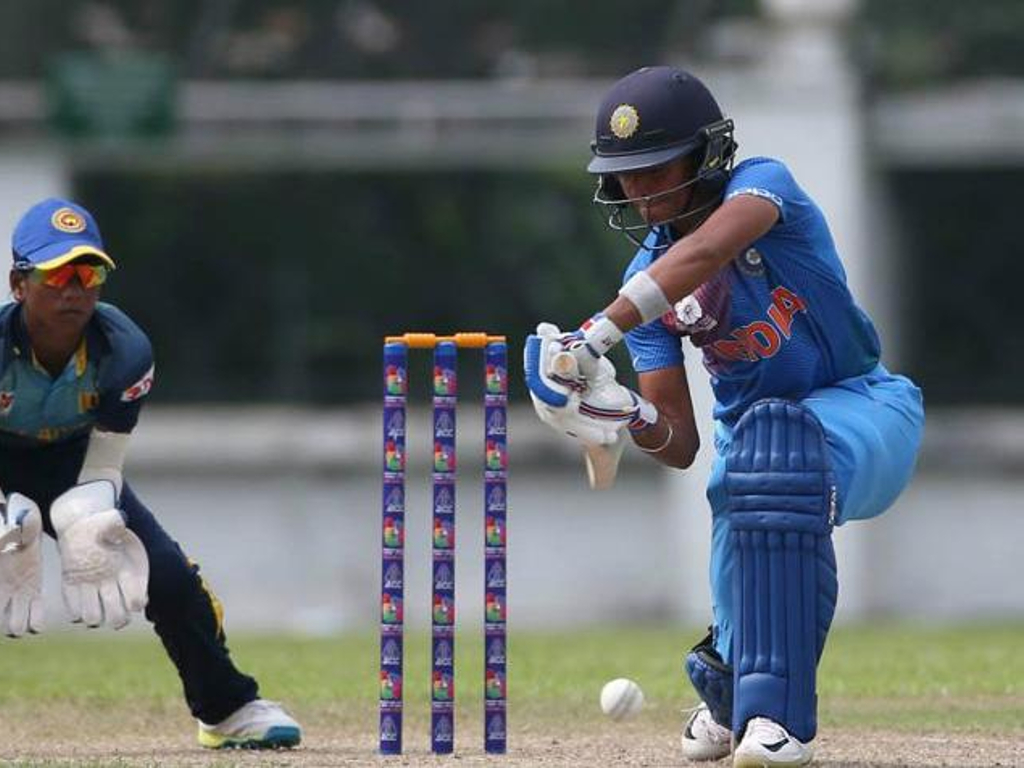 An unbeaten 29 by Veda Krishnamurthy and 2/20 by Ekta Bisht helped India beat Sri Lanka by seven wickets in the Women’s T20 Asia Cup in Kuala Lumpur on Thursday, 7 June.

Chasing a small target of 108 for victory, India were helped by contributions at the top from Mithali Raj (23) and Harmanpreet Kaur (24). The duo added 34 runs for the second wicket after India lost Smriti Mandhana (12) early.

Along the way, Raj became the first Indian woman to go past 2000 T20I runs.

When Raj and Kaur were dismissed, the scorecard read 70/3 in 13.3 overs and India still needed 38 runs from 39 balls. That equation was solved easily by Krishnamurthy and Anuja Patil (19) in an unbeaten 40-run stand for the fourth wicket. India finished on 110/3 in 18.5 overs.

Udeshika Prabodhani, Oshadi Ranasinghe and Nilakshi de Silva picked up one wicket each for Sri Lanka.

Earlier, Sri Lanka chose to bat, but Ekta Bisht, the left-arm spinner, got opener Nipuni Hansika stumped in the fourth over to give her side an early breakthrough at 12/1.

Hasini Perera added 38 with Yasoda Mendis to take Sri Lanka to the 50-run mark. Another stumping, this time of Mendis (27) off Poonam Yadav reduced Sri Lanka to 50/2, and that soon became 67/3 when Bisht trapped de Silva lbw for 7. 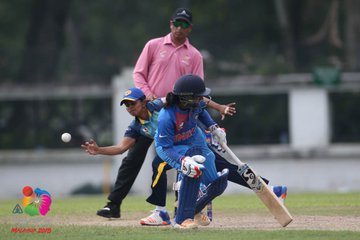 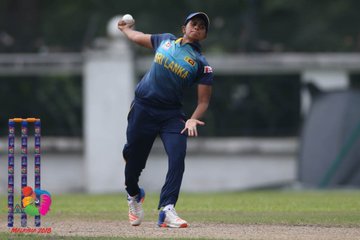 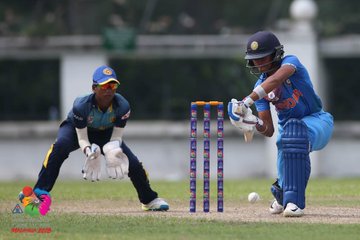 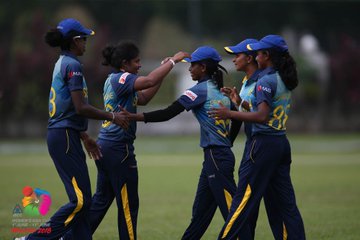 The third wicket escalated a mini-collapse for the Lankans. Thanks to some smart fielding from the Indians, they lost their next three wickets for 22 runs and were in trouble at 89/6 in the 17th over.

Perera remained unbeaten, adding some runs with the tailenders to take Sri Lanka’s score past 100. Apart from Bisht, Jhulan Goswami, Patil and Poonam Yadav returned one wicket each.

With this victory, India, who were shocked by Bangladesh in their previous game, retain their position at the top of the table with six points from four games. Pakistan and Bangladesh too are on the same number of points.

India play Pakistan next on 9 June while Sri Lanka square off against Thailand.

Bangladesh, on a high after back-to-back wins over Pakistan and India, put up another strong display, beating Thailand by nine wickets in their Women’s Twenty20 Asia Cup clash in Kuala Lumpur on Thursday 7 June.

Asked to bat first, Thailand could only put up 60/8 following an all-round bowling performance from Bangladesh, who had all their bowlers picking up at least one wicket. The chase was clinical, finished off in just 11 overs without much fuss.

It took just nine balls for the first Thailand wicket to fall, with Salma Khatun sending back Nattakan Chantam. Wickets didn’t fall in a rush, to be fair to Thailand, but by the end of 11 overs, they were 31/5 as the runs dried up.

But Nattaya Boochatham’s 15 from No.3, as well as captain Sornnarin Tippoch’s 13* and a 17-ball 14 from Sirintra Saengsakaorat late in the innings helped Thailand bat their 20 overs.

For Bangladesh, Khatun (2/6) and Nahida Akter (2/10) were the most successful bowlers, while Jahanara Alam, Fahima Khatun, Khadija Tul Kubra and Rumana Ahmed, the star of Bangladesh’s memorable win over India, picked up one wicket apiece.

Chanida Sutthiruang then accounted for Shamima Sultana, who had scored 31 and 33 in the last two games, in the third over of the Bangladesh chase, but that was the only bit of joy for Thailand. 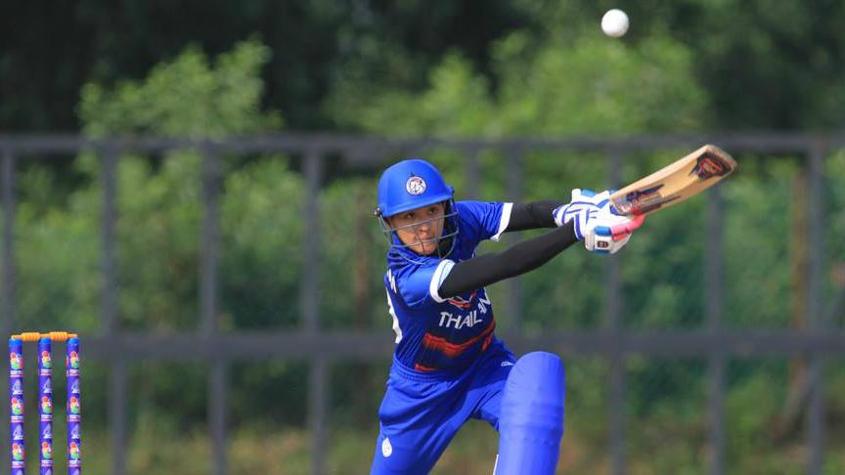 After that, Ayasha Rahman, the other opener, and Nigar Sultana batted with composure to chip away at the target. Rahman was the more watchful of the two, while Sultana scored quicker, till Rahman slammed the first ball of the 12th over, bowled by Tippoch, for six to end the game.

Bangladesh have now won three of their four games to get to six points, while Thailand only have the two points from their win over Malaysia. Thailand next play Sri Lanka in their final game on Saturday, while Bangladesh finish up with their fixture against bottom-placed Malaysia on the same day.

Malaysia hurtled to their fourth defeat in a row after being completely outplayed by Pakistan in a Women’s Twenty20 Asia Cup game in Kuala Lumpur on Thursday 7 June.

Pakistan, asked to bat, started poorly as they lost Nahida Khan to a run out in the very first over, but after that it was one-way traffic. Bismah Maroof, the Pakistan captain, followed up her 60* against Sri Lanka with a 37-ball 62, and Nida Dar chipped in with a 27-ball 41 to lead their team to 177/5 in their 20 overs.

In the first half, after the early run out, Pakistan progressed to 37 before losing Javeria Rauf for 13. Javeria Khan (31) and Maroof then took the total to 59 in the ninth over before the fall of another wicket, but that’s when Maroof came together with Dar and took the game well beyond Malaysia.

Their stand for the fourth wicket was worth 85 and the runs came in quick time, Maroof hitting six fours in her innings and Dar hitting three fours and a six. They were finally separated in the 17th over when Maroof was run out, but the damage had been done.

Dar fell not too long after, but Nain Abidi (9*) and Sana Mir (14*) scored at well over a run a ball to take Pakistan to a huge total.

Mir took off her gear, came back on the field, and tasted success straightaway by accounting for Christina Baret. Then it was over to Dar, with the ball this time, as she continued her outstanding wicket-taking form.

In the previous match, against Sri Lanka, the off-spinner had returned 5/21. On the day, against Malaysia, she had scarcely believable figures of 3.4-0-5-4, as she ran through the middle and lower-middle order.

Only one Malaysia batter reached double-digits, Winifred Anne Duraisingam (11), as the Pakistan bowlers – and fielders, there were three run outs – ran riot. The end came in 18.4 overs when Dar had Nadhirah Nasruddin caught by Nashra Sandhu.

The win put Pakistan temporarily on top of the table, before they slipped to second, with a fantastic net run rate of 2.602, which should help their case should it come down to a close fight to the finish.

They next play India, while Malaysia finish off with a game against Bangladesh, on Friday, the last day of the league stage.