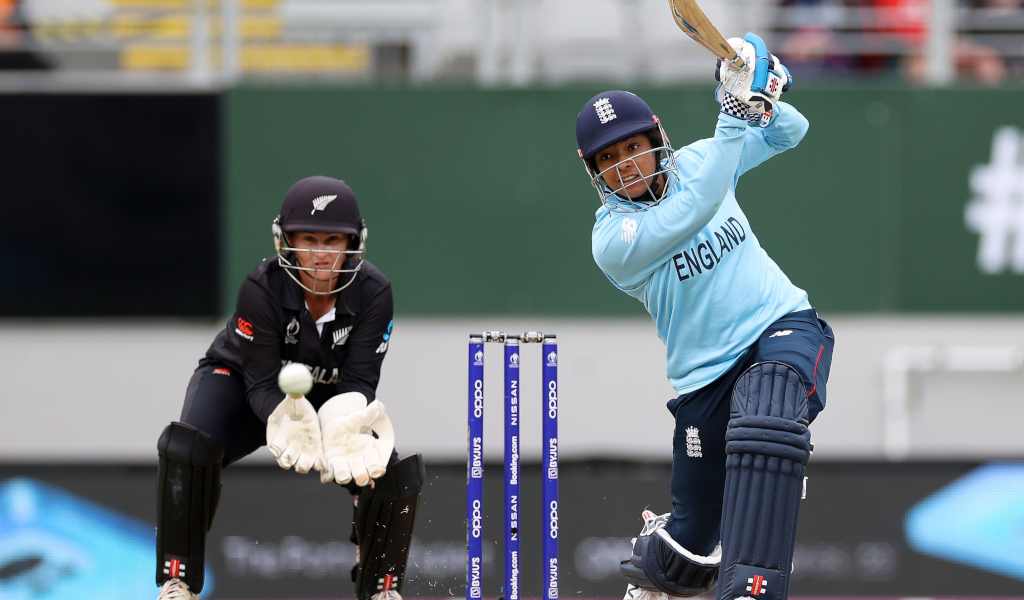 England have improved their chances of playing in the Women’s World Cup semi-finals after squeaking home with a one-wicket victory over New Zealand in Auckland.

The visitors won the toss and opted to bowl at Eden Park, with Manchester Originals duo Sophie Ecclestone and Kate Cross each taking three wickets and Charlie Dean collecting a pair as New Zealand made 203 across 48.5 overs.

Natalie Sciver top-scored with 61 as England took just 47.2 overs to amass 204, with captain Heather Knight scoring 42 and Dean left to close with veteran Anya Shrubsole, who roared with delight after knocking the winning single.

Sciver said in comments carried by The Guardian: “It’s crazy we got over the line when we probably should not have. I am in shock, there have been so many close games in this tournament.

“I knew I had to do most of the scoring and stay out there for a long time. It was tough bowling in the windy conditions, and a difficult wicket to find consistency.”

England started poorly with losses to Australia, the West Indies and South Africa before a change of fortunes with victories over India and now New Zealand.

Defending champions England held on to beat New Zealand by one wicket to keep their ICC Women’s World Cup 2022 hopes alive while all but ending the hosts’ hopes of making the semi-finals.

New Zealand posted a below-par 203, losing their final eight wickets for 69 as Maddy Green ran out of partners on 52 not out.

Injuries to Sophie Devine and Lea Tahuhu left the White Ferns without two senior players but their bowlers stepped up to push England all the way before Anya Shrubsole hit the winning runs.

New Zealand were quick off the mark, benefitting from more wayward bowling by England’s opening seamers Katherine Brunt and Shrubsole as they reached 52 without loss by the end of the powerplay.

Suzie Bates then departed for 22 from 36 balls as Kate Cross picked up her first wicket, the opener misdirecting a looping ball to Tammy Beaumont before Devine retired hurt on 37 from 42 balls with a back injury.

England capitalised on that good fortune with runs hard to come by, Cross delivering the first maiden of the day.

Spinner Charlie Dean continued her fine form as she got the wicket of Amelia Kerr, who had to go for 24 from 38 after Shrubsole held onto a catch at fine leg to leave New Zealand on 96 for two.

After taking four wickets in the win over India, off-spinner Dean proved the difference again after breaking Amy Satterthwaite and Maddy Green’s promising partnership on 38.

The 21-year-old trapped Satterthwaite LBW for 24 from 42, a review showing the ball just clipping the bails.

Green’s fifty compensated for her running out Brooke Halliday as Nat Sciver’s fine fielding forced a breakthrough that sparked a collapse which saw New Zealand lose six wickets for 47 runs.

Katey Martin went LBW before Tahuhu fell for a duck thanks to a fabulous one-handed catch from captain Heather Knight.

Devine returned to the field but only added four runs to her total before holing out to Dean at long-on to leave New Zealand on 161 for seven with 10 overs remaining.

Frances Mackay became the third LBW dismissal of the day when she was given out on review after making just one run.

When Hannah Rowe went for five her side were 184 for nine and in danger of not making 200.

Jess Kerr showed some late attacking intent until a miscommunication between her and Green saw her run out to bring the innings to a close on 203 with New Zealand failing to bat out their overs.

England’s opening partnership had only put on 17 runs when Danni Wyatt was dismissed by a great take from Rowe who stretched out her arms as the ball flew over her head.

Tahuhu finally got her length right off the final ball of her first over to dismiss Beaumont for 25 and leave England on 53 for two at the end of the powerplay.

That scalp made Tahuhu the highest wicket-taker for New Zealand in ODIs with 93, surpassing Aimee Watkins, but she then added to her side’s injury worries, with Devine unable to field, after being forced off with a hamstring issue.

Knight built steadily with Sciver, always keeping England above the DLS par score with rain around, until she was given out LBW off the bowling of Mackay for 42.

Halliday then took her maiden international wicket to dismiss Amy Jones for one from five balls when the wicketkeeper-batter sent the ball straight to stand-in captain Satterthwaite at mid-wicket.

Sciver was joined by Sophia Dunkley and the pair patiently brough up their half-century stand off 64 balls as England moved within 50 of victory.

But when Dunkley was clean-bowled by Mackay for 33 it sparked a collapse of five for 20 that almost cost them the game.

Sciver was then dismissed by Jess Kerr for 61 to leave England on 187 for six with 6.4 overs remaining.

Ecclestone went without scoring before Cross was given out LBW as Mackay earned career-best figures of 4-34, England slipping to 194 for eight.

Brunt’s despairing dive failed to save her from being run out with eight still needed and New Zealand needing just one wicket to snatch victory.

However, Shrubsole would get the job done, taking the time that her predecessors had failed to, before celebrating wildly as England just about held their nerve.