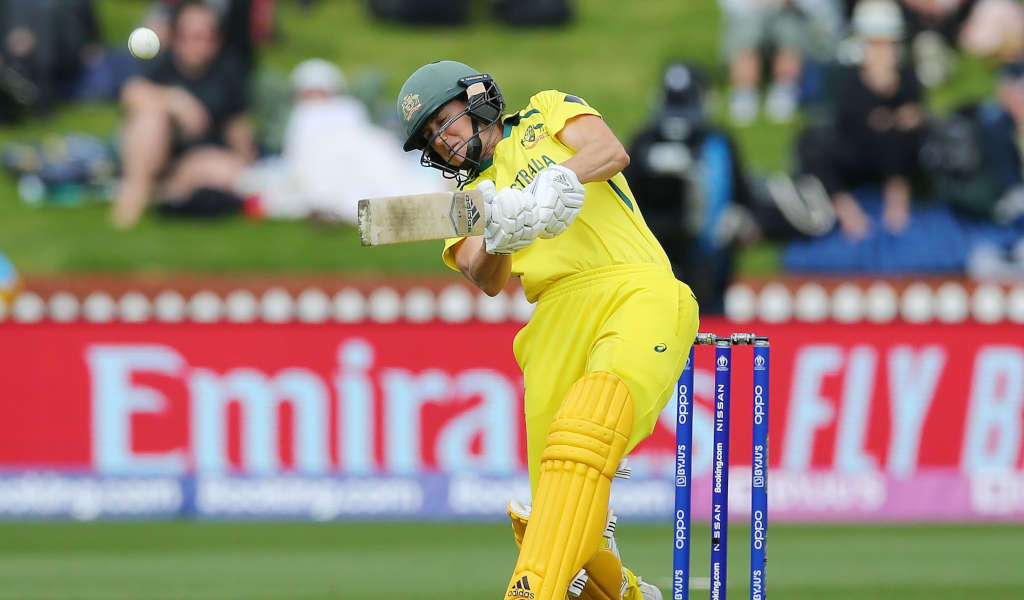 Australia made a shaky start but put New Zealand to the sword in a 141–run victory to remain undefeated at the ICC Women’s World Cup 2022.

A 101-run partnership for the fifth wicket between Ellyse Perry and Tahlia McGrath stabilised Australia’s innings before some big hitting from Ashleigh Gardner lifted them to 269 for eight.

New Zealand went from 22 for no loss to 35 for five in no time in reply and never recovered as they were bowled out for 128 at the Basin Reserve.

New Zealand won the toss and elected to field but did not take their first wicket until the final ball of the powerplay, as Alyssa Healy’s attempted pull shot found Amelia Kerr at midwicket.

Fielder Katey Martin then got into action in her 100th ODI, taking the catch to dismiss Meg Lanning, before opener Rachael Haynes fell four balls later to Lea Tahuhu to leave Australia in a spot of bother at 56 for three.

Beth Mooney joined Perry at the crease and the pair targeted seamer Hayley Jensen for runs, steering their side to 97 for three at the half-way mark – but boundaries were often few and far between.

Just as it looked like the partnership was starting to develop, Mooney chopped on off the bowling of Jess Kerr for 30 from 44 balls.

McGrath joined Perry and the two rotated the strike masterfully, bringing up their 50-run partnership with the final ball of the 40th over.

And then Australia really kicked into gear, putting on more than 100 runs in the final 10 overs for a second time at this World Cup with Jensen again the initial target, being taken all around the ground for 20 off one over.

Maddy Green provided the something special needed to end the partnership, as she ran round to her left and made a leaping catch to dismiss Perry for an 86-ball 68 off the bowling off Tahuhu.

Unfortunately for New Zealand, that was the beginning of Australia’s assault, as Gardner, only recently out of Covid isolation, got off the mark with a four.

McGrath fell for 57 but Gardner just kept going and finished the innings with a six to reach 48 from only 18 balls to set New Zealand 270 to win.

In blustery Wellington, New Zealand had the wind firmly knocked out of their sails as teenage sensation Darcie Brown combined with Perry to rip through the top order.

Devine was out for run-a-ball six and Amelia Kerr only scored one in her 50th ODI, as Mooney took a stunning catch at slip.

New Zealand were frustrated and Suzie Bates showed it by sending up a high but comfortable catch to McGrath at midwicket.

The home side had slipped to 24 for three and things went from bad to worse, as Green went for three by sending an edge to Healy behind the stumps. Frances Mackay made just one as she was given out LBW off the bowling of Brown to leave the hosts on 35 for five before the experience of Amy Satterthwaite and Martin temporarily settled nerves.

But Amanda-Jade Wellington took two wickets in two balls, first trapping Martin LBW and then tempting Jensen into a stroke that was caught at cover.

Wellington had to wait another over for her hat-trick ball, which Satterthwaite safely defended, but wickets continued to fall and Hannah Rowe went back to the pavilion for just six.

Out came Tahuhu to join her wife Satterthwaite and the pair put on a 35-run partnership before Lanning took a fine catch to dismiss Satterthwaite for 44.

Tahuhu was the final wicket to fall two overs later as Australia earned a mammoth win to take a big step towards the semi-finals.