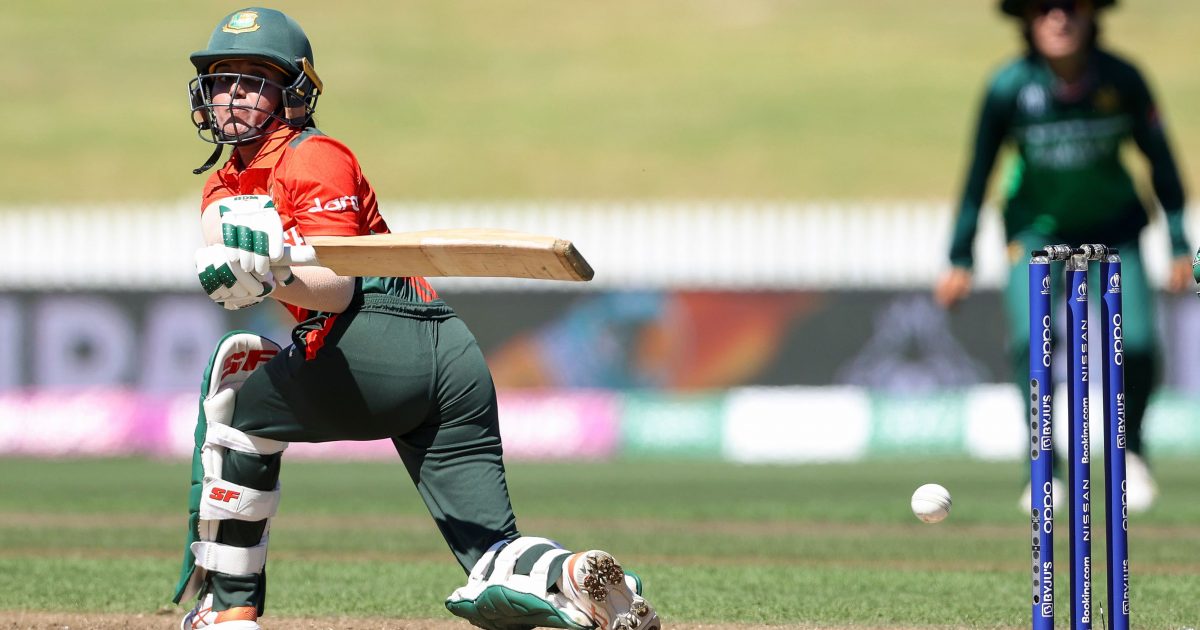 Fargana anchored the Tigers to 234 for seven. Later Fahima Khatun took three wickets at the death to help restrict Pakistan to 225 for nine, despite Sidra Amin’s superb century.

Pakistan struggled to keep up with the required run-rate and lost regular wickets during the final 10 overs.

Just as Pakistan were looking to up the tempo, the rug would be pulled out from underneath them.

They remain without an ICC Women’s World Cup victory in 13 years, while Bangladesh celebrated a major milestone in their development after an impressive all-round display.

Pakistan won the toss and elected to field.

Shamima Sultana was the first to fall as she hit Nida Dar straight to midwicket for 17, bringing Fargana to the crease.

Bangladesh finished the powerplay on 51 for one.

Sharmin Akhter had moved to a run-a-ball 29. However some miserly bowling from Pakistan slowed her down before she gloved one back onto her own stumps for 44.

Akhter’s departure Bangladesh on 79 for two at the beginning of the 20th over.

At that time Fargana was on just eight off 32 deliveries but aware that she now had to step up and anchor the innings. Fortunately for Bangladesh, she did just that.

Fargana hit a much-needed boundary mid-way through the 25th over.

Bangladesh reached the halfway stage at 92 for two.

Fargana smacked Fatima Sana for successive boundaries at the beginning of the 31st over. She then had an LBW decision overturned on review after initially being given out.

Nigar Sultana was brilliant at finding ones and twos and Pakistan were struggling for wickets.

Bangladesh worked their way into a promising position as Fargana brought up her ninth ODI half-century off 89 balls.

Nigar (46) fell in the 40th over after a busy 64-ball innings that brought just one boundary.

Rumana Ahmed however, upped the tempo alongside Fargana.

Successive boundaries helped Bangladesh past 200 in the 44th over.

Rumana’s 13-ball cameo ended in the 45th as she holed out off Nashra Sundhu.

Sundhu removed Fargana two overs later by finding the edge of her bat for 71 and trapped Fahima Khatun LBW the very next ball.

Salma Khatun was forced to block the hat-trick ball, while some clever running through the rest of the innings helped Bangladesh to their highest-ever women’s ODI score.

Pakistan made a promising start in reply, with Sidra and Nahida Khan at the top of the order. They reached 46 for no loss at the end of the powerplay and then brought up the 50 partnership in the 13th.

The breakthrough came in the 24th over, as Nahida chopped a Rumana delivery onto her own stumps for 43, ending a promising 91-run stand.

Sidra was then dropped twice in the space of three overs. The first, a simple chance at point from a thick edge.

Pakistan’s main concern was an increasing run-rate required which had crept to over six.

They reached the final 10 overs requiring 67 with eight wickets in hand and when they scored 11 off the 41st over, it looked like the game would go down to the wire.

But Sidra was soon running out of partners, as Omaima went for 10 and Nida Dar for a first-ball duck, while the 44th over proved a key turning point.

Fahima Khatun took two wickets in two balls to remove Aliya Riaz and Fatima Sana, before Sidra Nawaz was run out for just one to leave Pakistan on 188 for seven.

Sidra Amin brought up her maiden ODI century shortly after but was run out for 104 in the 48th and though Pakistan needed 16 to win off the last, they fell nine runs short.