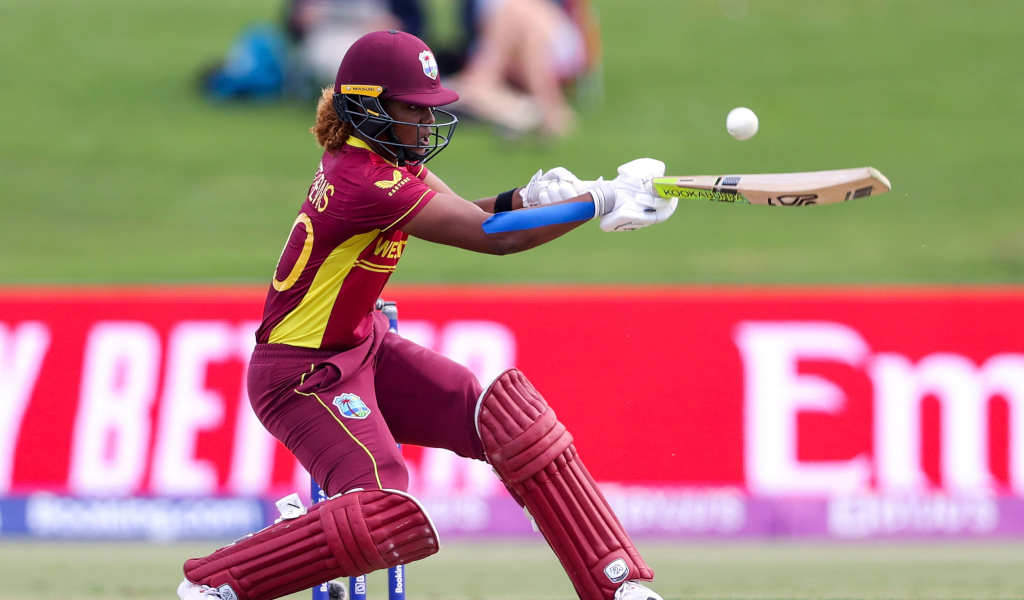 West Indies allrounder Hayley Matthews shone with bat and ball as her side began their Women’s World Cup 2022 campaign with a nail-biting three-run victory over hosts New Zealand in Tauranga.

Sent in as a makeshift opener Matthews’s career-best 119 led Windies to 259 for nine. She then took two for 41 with the ball to inspire her side to glory as the competition got off to a thrilling start.

Sophie Devine did her utmost to steer New Zealand to what would have been the highest-ever successful World Cup chase with an excellent century of her own but her departure with 45 required saw the pendulum swing back in West Indies’ direction.

Excellent cameos from Katey Martin (44) and Jess Kerr (25) kept the game on a knife-edge and the White Ferns needed six from the final over but Deandra Dottin, bowling her first over of the innings, dismissed both before a run out sealed the outcome.

The West Indies had been put in by the hosts upon losing the toss but raced out the traps.

Dottin set the tone, cutting the opening ball of the tournament for four over cover in a first over costing 12, only for Lea Tahuhu to soon earn revenge when a leading edge was held by Jess Kerr at mid-off.

Matthews took up the assault, cracking three boundaries from what remained of the over – nine arrived in the first 27 deliveries in all.

Kycia Knight’s departure saw captain Stafanie Taylor join Matthews and the pair took their side into three figures during a composed 66-run partnership which was broken when Taylor was caught behind down the leg-side for 30.

That provided Tahuhu with her second scalp and she could have had a third when new batter Shemaine Campbell was put down by Brooke Halliday at deep square leg with just four to her name.

Having survived that let-off, her fortune ran out on 20 when a successful lbw review confirmed Amelia Kerr’s googly would have gone on to hit the stumps to leave West Indies on 165 for four.

At the other end, Matthews continued to accumulate despite pulling up with an apparent hamstring injury in the 27th over, carving Fran Jonas for consecutive boundaries shortly afterwards.

Chedean Nation kept up the momentum with regular boundaries before Matthews reached her century at the start of the 42nd over, celebrating in style by lofting the only six of the innings over long-off four balls later.

An inventive scoop for four followed as the opener looked to accelerate but her magnificent knock came to an end on 119 when her first miscue landed safely in the hands of Hannah Rowe on the long-off boundary to provide Jess Kerr with her second wicket.

Tahuhu took her third when Nation (36) top-edged a hook behind as regular wickets prevented a late surge from the West Indies but they took 11 from the final over, which finished with Anisa Mohammed being run out, to finish on a competitive 259 for nine.

New Zealand’s innings had a tamer beginning than that of their opponents as Devine and Suzie Bates started watchfully, the former whipping the first boundary through deep mid-wicket from the first ball of the fourth over.

She lost her opening partner in unfortunate circumstances from the next delivery, Bates run out backing up after Chinelle Henry deflected a straight drive on to the stumps, and the hosts’ progress remained cautious through the remainder of a powerplay which finished with the scoreboard reading 41 for one.

Just six had been added to that total when Matthews’ memorable day continued, the centurion trapping Amelia Kerr in front with just her second delivery.

Devine’s presence was becoming increasingly vital and she should have fallen on 37 only to be spilled at mid-on by Shamilia Connell, a drop that looked all the more costly when the opener pulled Mohammed through deep mid-wicket to move to her half-century.

Amy Satterthwaite was also put down, substitute Cherry-Ann Fraser letting the ball slip through her grasp at deep square leg, before Windies skipper Taylor missed a presentable chance to run out her opposite number on 66.

The breakthrough the Courtney Walsh-coached side craved arrived courtesy of Mohammed, who pinned Satterthwaite’s pads with a full delivery to end a third-wicket stand worth 76, and the spinner was celebrating once more when Tahuhu was bowled by her next delivery.

The 30-over mark arrived with the White Ferns requiring 125 more for victory and plenty of hopes were pinned on their captain, who received another life when Henry put down a top-edged sweep.

Devine lost further company when Maddy Green chipped to mid-wicket and Halliday was caught at slip but she continued untroubled and brought up her sixth ODI century from 117 balls, keeping the celebration muted due to the bigger prize at stake.

With the equation left at 45 needed from six overs, Windies eventually held on to a chance to dismiss Devine – and it was worth the wait.

Henry dived to her left to take an excellent return catch and see the back of the skipper for a sublime 108 but Martin and Jess Kerr were in no mood to go down without a fight.

Consecutive boundaries from Martin left New Zealand needing six from the final over and Taylor turned to Dottin, who trapped Martin lbw before Kerr spooned to mid-off.

With four needed from two, out strode 17-year-old Jonas, who was run out at the non-striker’s end from the penultimate delivery of an extraordinary match to spark jubilant Windies celebrations.