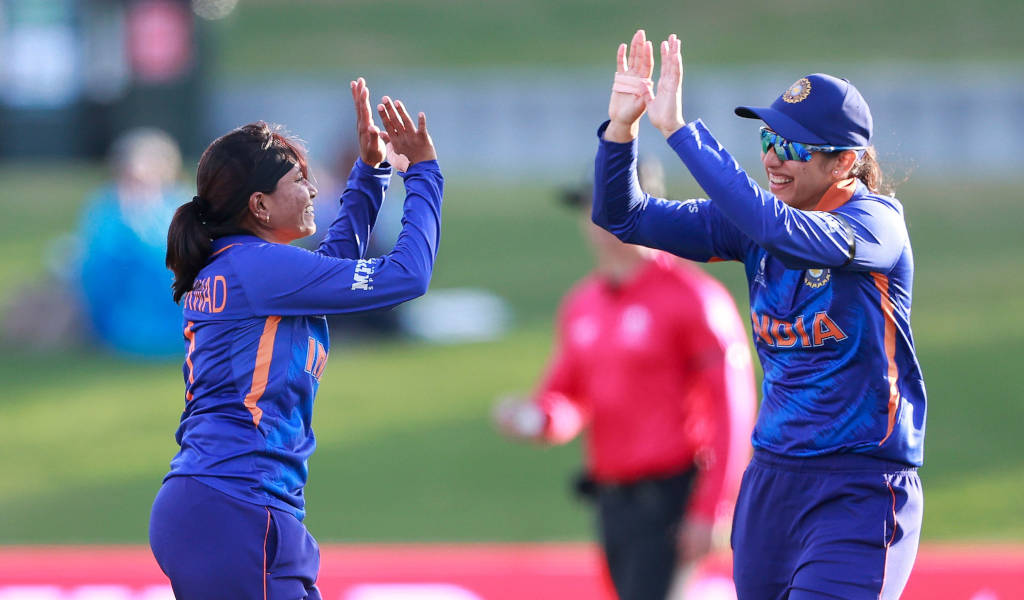 India recorded an impressive 107-run Women’s World Cup victory over arch-rivals Pakistan despite an off-colour performance from their batters at the Bay Oval in Tauranga on Sunday.

India were struggling at 114 for six at one stage and seemed to be under pressure when Vastrakar and Rana blasted their highest ODI scores to lift India to a competitive 244 for seven much to the delight of their fans who shouted in support and encouragement.

In reply, Pakistan never got going as they slipped to 98 for seven, wicketkeeper Richa Ghosh taking a record five dismissals on World Cup debut as India earned their first win in the Women’s World Cup 2022.

India won the toss and chose to bat with the Bay Oval bathed in glorious sunshine, but there was a storm brewing in the middle as Shafali Verma was dismissed for a duck. Diana Baig cleaned up her leg stump as Verma’s issues in the one-day format continued on to the World Cup stage.

Fellow opener Smriti Mandhana would provide the release, scoring the first boundary with the 25th ball of the innings. Mandhana was timing the ball beautifully but boundaries still proved hard to come by, a pre-meditated strike down the ground in the final over of the power play landed so forcefully it plugged short of the boundary.

She didn’t let that stop her as two balls later the ball sailed over the boundary to bring up India’s first six and end the powerplay with India 33 for one.

Pakistan’s fielding had been accurate with singles cut off and boundary hopes reeled in, but at the 20 over mark the field settings grew more and more defensive.

Mandhana’s fifty would soon come bringing it up off 71 balls to register her 25th score over fifty, but a first against Pakistan.

There would be little time to celebrate as Deepti Sharma was bowled by Nashra Sundhu with the very next ball.

A collapse was beginning as Mandhana fell for 52 as Anam Amin produced a stunning caught and bowled to leave two new batters at the crease,

Those batters were still to be feared even if they were on nought, Harmanpreet Kaur now joined by Mithali Raj as she embarked on a record sixth World Cup campaign.

Kaur would not threaten though as she was given out lbw for five from 14 as Nida Dar became the fourth bowler to take a wicket and India slipped to 108 for four.

The young star Richa Ghosh could not succeed where her elders had failed as she went for a five-ball duck with Dar picking up her second as Ghosh chopped onto her wickets.

Pakistan were on top as Fatima Sana earned a maiden over before Sundhu got her second as Raj was forced to go, walking off as slowly as she has scored, her nine coming from 36 balls.

It felt like India’s tail was set to wag quickly with the Women in Blue on 114 for six but Pooja Vastrakaer joined Sneh Rana with other ideas.

With 34.4 overs gone, Vastrakar showed her intent by scoring the first boundary since the second delivery of the 17th over.

The duo brought up their fifty partnership off 43 balls and they hadn’t even got properly going as overs 40 to 42 went for 10 or more runs.

.Both batters brought up their highest ODI scores before Vastrakar had to go for 67 from 59 balls ending a World Cup record seventh-wicket partnership of 122.

Jhulan Goswami would end the innings with a four to bring India to 244 for seven, which seemed unlikely 16 overs before.

Goswami would then open the bowling in her fifth World Cup as Pakistan made a slow start, making just 26 from the first 10 overs.

The fact they had not lost a wicket was a silver lining that soon disappeared as Javeria Khan was caught by Goswami off the bowling of Gayakwad.

Out came captain Bismah Maroof, but she could make only 15 from 24 balls as she was caught behind with Pakistan slipping to 53 for two.

After her heroics with the bat, Rana then dismissed Omaima Sohail with her second ball before Goswami got her first to dismiss anchor Sidra Amin for 30 from 64 balls.

Doing so brought out Aliya Riaz who ended both warm-up games not out with scores over 40, but not this time.

Riaz would make 11 from 23 balls before being stumped by Ghosh, her fourth involvement of the innings to make amends for her batting performance.

Sana was next to fall as Pakistan lost their seventh wicket for just 98 runs, no matching Rana and Vastrakar.

Another small partnership was made for Pakistan as Baig joined Sidra Nawaz in the middle before Gayakwad got her fourth of the afternoon, an Indian spinner again doing the business.

While Gayakwad had to wait another over to attempt her five-fer, Ghosh picked up hers as she caught Sundhu for a duck becoming the first wicket-keeper to take five dismissals on World Cup debut.

With Gayakwad getting the chance to bowl her final over, each delivery was met by chants and cheers that had boomed round the ground all afternoon.

Baig played with no fear taking six runs off her to deny her a five-fer but she still earned figures of four for 31.

A seventh-wicket partnership had not materialised but it looked as though a tenth-wicket one was forming as Baig and Anam Amin frustrated India’s push for victory.

Kaur would take the final catch as Baig had to go for an entertaining 24 from 35 balls as India got their World Cup campaign up and running with Pakistan all out for 137.