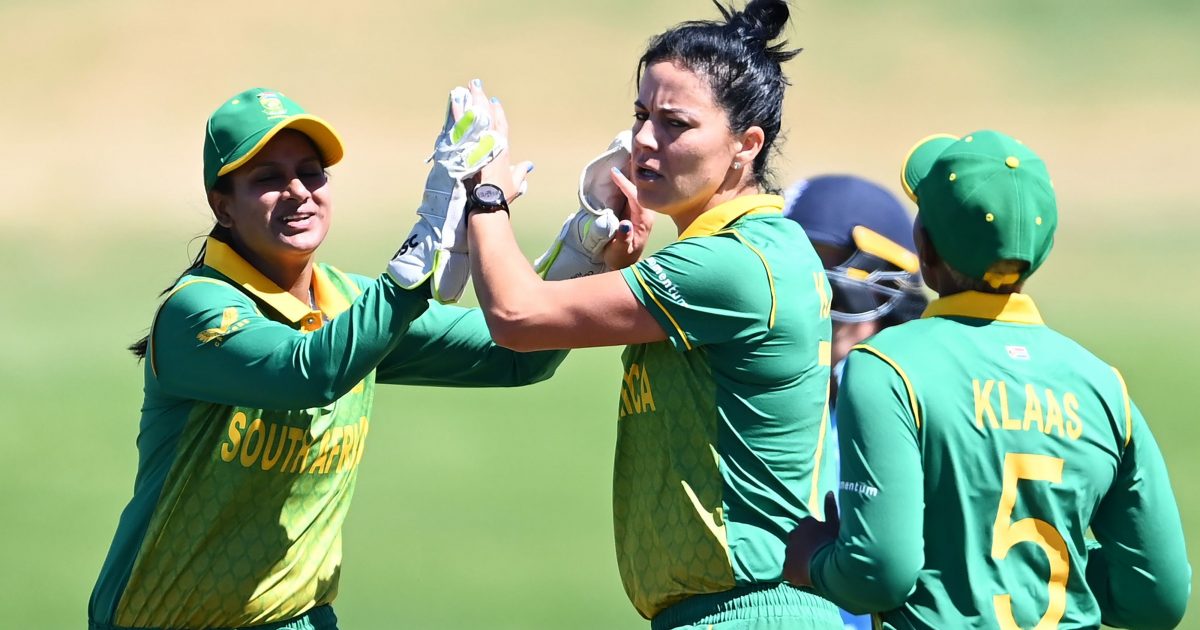 England had to be rescued from a poor start.

South Africa, won the toss and chose to bowl and that decision proved to be the right one early on.

A 107-run partnership from Tammy Beaumont and Amy Jones set them right before Marizanne Kapp fought back with her first international five-wicket haul to leave her side needing 236 to win.

Kapp followed Laura Wolvaardt’s lead with the bat to set up a nail-biting finish before Trisha Chetty hit the winning runs for South Africa’s first World Cup win over England in 20 years.

Kapp dismissed both Danni Wyatt for three – with Wolvaardt taking the catch at the third attempt – and Heather Knight for nine, as England slumped to 19 for two.

Shortly after, Nat Sciver was also heading back to the pavilion as she edged the ball onto her hip, which then ricocheted back onto the toe of the bat and sent a catch to the switched-on Lizelle Lee at slip.

At 42 for three, England were in trouble but the previously out-of-form Jones, alongside Beaumont, started the fightback.

They made their fifth century partnership before Masabata Klaas trapped Beaumont LBW for 62 from 97 deliveries. Marking the first time Beaumont had not converted a fifty to a hundred against South Africa in ODIs.

Jones reached 53, her first half-century in World Cups, before she was run out to leave England on 167 for five.

England then started to lose regular wickets as the South African seamers came on to replace the ineffective spinners.

Kapp then earned a third wicket. Katherine Brunt (17) sent an edge to the substitute fielder at cover. Then a fourth followed as Sophia Dunkley (26) nicked behind.

Kapp picked up her first international five-fer with the wicket of Kate Cross. Cross skied a catch to Chloe Tryon, as England finished on 235 for nine from their 50 overs. That set South Africa what would be their highest run-chase in the World Cup so far.

Opener Wolvaardt was dropped on four by the usually reliable Beaumont. Lizelle Lee was then bowled by Anya Shrubsole, as England made a strong start.

Wolvaardt and Tazmin Brits put on 56 for the second wicket. However, Brits was caught at deep fine-leg for 23 to give Sciver her first wicket of the game.

Sune Luus joined Wolvaardt in the middle and the pair put on a 67-ball 50-stand but were saved by more fielding errors from England.

Jones, couldn’t hold on to two stumping chances but she made amends by eventually stumping Luus (36) to leave South Africa on 147 for three.

Cross then took her first World Cup wicket as Wolvaardt found Sciver at mid-wicket to end her 101-ball knock of 77.

It was hard going for the spinners. However, Sophie Ecclestone dismissed Mignon du Preez for eight before Brunt ran out Tryon at the non-striker’s end, to leave South Africa on 199 for six.

Kapp remained and she smashed the first six of the game to bring the required run-rate back under six with four overs to go.

Shrubsole added another twist when she trapped Kapp LBW for 32. That left South Africa needing 10 to get from the final 10 balls.

Chetty and Shabnim Ismail got South Africa home with four balls to spare though. England have now lost three World Cup games in a row for the first time.