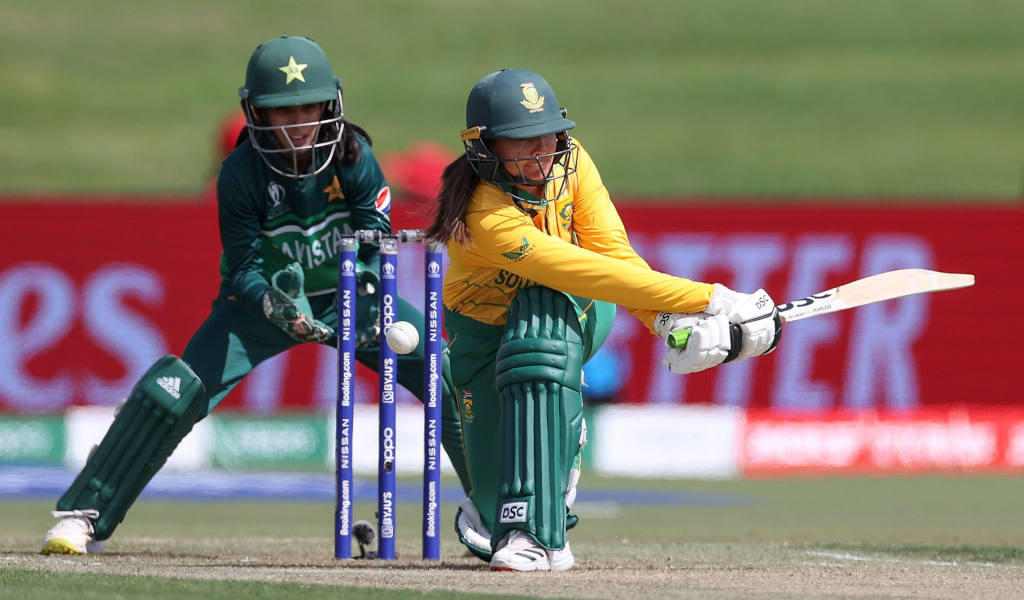 South Africa opener Laura Wolvaardt hailed skipper Sune Luus’s composure after she shepherded the Proteas to a six-run win over Pakistan at the Women’s World Cup.

South Africa claimed their second successive victory at the Women’s World Cup with the penultimate ball, dismissing Pakistan for 217 to secure victory.

Luus is standing in as skipper in the absence of Dane van Niekerk but Wolvaardt has paid tribute to her composed leadership.

“We were surprisingly calm given the situation, particularly Sune,” said the opener.

“Sometimes you don’t even know she’s on the cricket field – she looks exactly the same as when she’s on the field! That’s how chilled she is.

“That rubs off on everyone at the end of the day and it’s going to be crucial going forward. We need to be able to remain calm in those big moments.”

Laura Wolvaardt stands out with the bat

Wolvaardt had led the way with the bat. She struck a superb 75 to lift South Africa to 223 for nine from their 50 overs.

The 22-year-old standout passed 40 for the eighth time in nine World Cup innings. However, she hasn’t yet reached three figures.

Wolvaardt was frustrated to give it away with a dolly of a return catch to leg spinner Ghulam Fatima.

“I was very upset today when I got out,” she said. “I get very angry when I feel like I’ve put in the hard work and don’t take it all the way, especially today.

“I thought how I got out was very dumb. I want to be putting my hand up in that department and scoring a hundred or two in this World Cup would be ideal.

“I feel like I’m getting the starts well, it’s just about focusing a bit harder around the 70 mark.”

Pakistan seemed to have victory in their grasp. However, they sunk from 144 for three to a third successive loss at this tournament.

The last time Pakistan tasted Women’s World Cup success was in 2009 and captain Bismah Maroof rued her side’s inability to raise their game for big moments.

“This game will hurt us,” she said. “We had the belief that we could do it.

“We have talked in our meetings about winning key moments in matches. We fought really hard but lost the big moments and South Africa deserved to win.”

They face Bangladesh next up on Sunday and on paper, a meeting with the debutants gives them a good chance of arresting a 17-match losing run at the World Cup.

“We are improving and have that confidence to beat any team, we just need to perform to our potential and if we can grab those key moments it will be nice,” said Bismah.

“We need to stay in the present and make the right decisions.

“There are many positives we can take for the next game, especially the good partnerships in the batting.

“We look forward to the next match against Bangladesh and we just try to win every match from now on.”